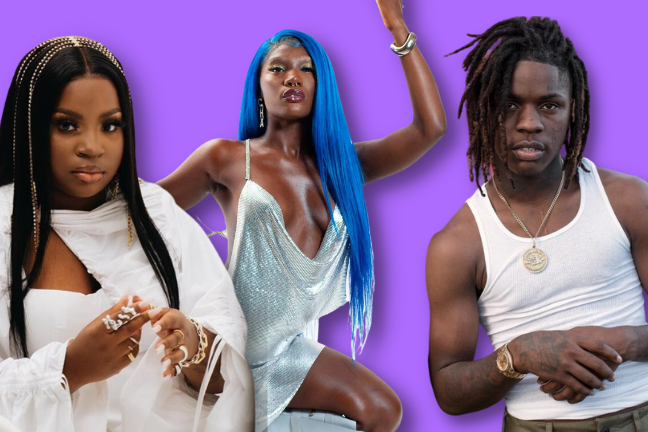 Back every fortnight to feature half-dozen emerging global acts that you need to be across! From all corners of the planet, these emerging stars should be on your playlists right now! Keep it locked to FOREIGN EXCHANGE; your home to find new talent on the reg. Stay locked via our socials, and if you’re outside the AU and keen on some AUD’$ love, be sure to send us your latest drop via Submithub.

Announcing her signing to Top Dawg Entertainment/Capitol Records last month with ‘Persuasive’, Doechii makes a quick turnaround for his second offering, ‘Crazy’. Building her online following from YouTube vlogs and SoundCloud releases dating back to 2016, the Florida artist’s ‘Yucky BluckyFruitcake’ track exploded on TikTok before she featured on Isaiah Rashad’s ‘Wat U Sed’ from his The House Is Burning album last year. In her latest track ‘Crazy’, the 22-year-old artist harnesses her unbridled confidence and unleashes a unique and charged-up delivery over the hip-hop and broken beat production of Kal Banx. While the matching visuals have since been removed from YouTube trending for nudity, the music video’s director C. Prinz asks viewers “to see the female form not in moments of sexuality but instead for what we all go through, what we survive through and what we transcend.” Deservedly joining TDE’s star-studded label of SZA, Kendrick Lamar and more, Doechii continues to be an endlessly creative and powerful musician.

SLATT ZY – FEEL IT IN MY SOUL

Tennessee native Slatt Zy keeps building the buzz with a contemplative new single, ‘Feel It In My Soul’. Raised in Chattanooga, the 18-year-old artist first turned his street struggles into soulful singles in 2019 with ‘Blind’. Slatt delivers heartfelt melodies and opens up over the sombre piano chords and thumping trap production of D Major, the multi-platinum producer who’s worked with Rod Wave, Polo G, Lil Tjay and more. Surrounded by his friends, he performs the track in the ShotByWolf music video and honours the loss of another senseless death. ‘Feel It In My Soul’ is Slatt’s fourth release this year following two other solo singles and his ‘Change’ collaboration with 100k Track and YNW BSlime. The South is never short of rising young talent and with already two self-reflective, full-length projects under his name, Slatt Zy uses his trauma, vulnerable lyrics and incredible vocals to inspire a new generation of Tennessee youth.

Berlin-based artist Juweel makes her second appearance this year with ‘Par Cœur’, translating to ‘by heart’. Making her debut back in 2020, the French-born rapper now shares a defiant new single about standing up for yourself and while she raps and sings in her native language, the intensity she brings can resonates universally. She first released in 2020 and has followed through with a handful of singles since, including her 2022 debut titled ‘Je m’appelle Karma’, which translates to ‘My Name is Karma’. The Mosaik Records signee delivers a melodic and powerful cadence that pairs perfectly with the booming and dark trap production from KasuzBeats. The ‘Par Cœr’ music video is directed by Alex Velez and will be released next week, followed by her debut album in the near future.

Slump6s’ output has been on another level in 2022 and ‘Own It’ is the most recent addition. He grew up in Rochester, New York, and was introduced to music at an extremely young age by his Dad. With Michael Jackson as an early influence, by six years old he was recording himself over his father’s beats. His musical interest grew as he played instruments throughout school but it was the SoundCloud era and artists like XXXTENTACION, Lil Uzi Vert and Ski Mask the Slump God that quickly inspired him to upload his own songs. Eventually dropping ‘Spark’ in 2020, the buzz for Slump6s started to intensify as he dropped his 16 EP independently before collaborating with Baby Santana on ‘Antisocial’. Signing to Republic Records shortly after, he’s been on a roll ever since. As his seventh release of the year, ‘Own It’ is an energetic, fast-paced single showcasing Slump6s’ compelling sonics in a similar lane to Playboi Carti, SSG Kobe and KA$HDAMI, all underground rap staples.

Toronto-based singer Savannah Ré invites you on a sonic holiday with her first single of 2022, ‘Fiji’. Under the mentorship of decorated producer Boi-1da, Savannah has become one of Canada’s exciting new artists and R&B’s go-to songwriter, working with Jessie Reyez, Normani and more. Her talents extend past the writing pad and since debuting in 2019 with ‘Count’em Off (Rant)’, she’s already etched her name into Canadian music history – as the first artist to be nominated for both the Contemporary R&B Recording of the Year JUNO Award and Traditional R&B/Soul Recording of the Year. Selected as one of Canada’s first #YouTubeBlack Voices Music Class of 2022, Savannah launched the new year with ‘Fiji’, a smooth and lush trap R&B record that she slides over with heavenly vocals and playful lyrics. Produced by her husband YogiTheProducer, the track was released alongside a visualiser directed by Justin Wu. It’s been two years since her debut project Opia but a predecessor looks to be on the way having recently followed up ‘Fiji’ with her ode to devotion, ‘Last One’ featuring Dylan Sinclair.

Yung6ix shares his silky new tune ‘Cartier Riddim’ featuring Suji, DMA, OG Rah and Excel XIX. The South Nigerian artist has been active in the music industry for over a decade, collaborating with Afrobeats star WizKid as early as 2011 on Yung6ix’s debut album. He’s been on a steady grind establishing an extensive discography comprised of a handful of albums and countless singles, four of which released this year prior to ‘Cartier Riddim’. The new track is an icy and melodic hip-hop offering from the 32-year-old artist with a verse from each rapper and playful adlibs appearing throughout the hook. ‘Cartier Riddim’ is taken from his upcoming album Green Light Green 2, a sequel to his Headies nominated project from 2011. Outside of his music, Yung6ix is also the CEO of the Billionaire Circle Worldwide label. As an OG of the Nigerian music scene, he showcases rising talent and continues to flourish in a decade long career.