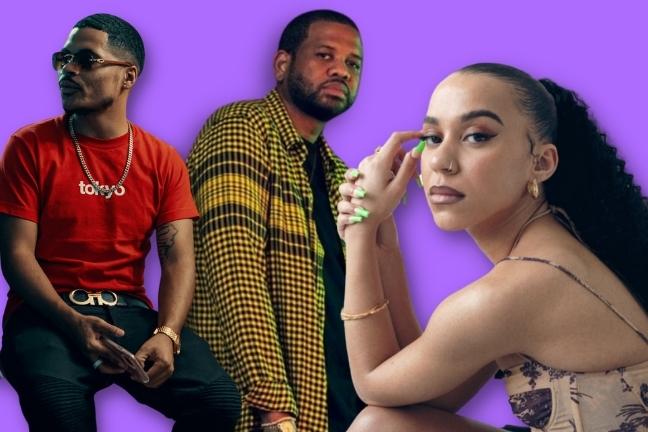 Every fortnight we present 6 emerging global acts that you need to be across! From all corners of the planet, these emerging stars should be on your playlists right now! Keep it locked to FOREIGN EXCHANGE; your home to find new talent on the reg. Stay locked via our socials, and if you’re outside the AU and keen on some AUD’$ love, be sure to send us your latest drop via Submithub.

Wovvoka has paved her way from rural Illinois to being signed to Donald Glover’s Wolf + Rothstein label. Cut from the same cloth as alt-rap artists like Rico Nasty and $NOT, her label debut single ‘GANG!!!’ is mosh pit music. With the world opening back up, festivals are back across the globe and don’t be surprised to see Wovvoka in the mix. The under two-minute track was previewed by Zane Lowe on his Apple Music show last month and injects a short shot of sonic adrenaline. Rage rap is one of the trendiest sub-genres within hip hop right now and Wovvoka’s three releases in under 12 months reflect this. From her 2021 debut ‘Right Foot’ to her latest single ‘100%’, she’s honed her artistry and it’ll be extremely exciting to see where she goes.

Among the never-ending influx of upcoming New York artists, 14-year-old Cartier J exudes confidence on ‘Balmain’. Coming out of Brooklyn NY, Cartier shows maturity well above his age and a notable presence on the mic for someone in their sophomore year. Debuting only last year with the guitar-led trap track ‘Revenge’, Cartier released five more singles in 2021 and has already started the new year with a similar sentiment. Rapping about his experiences in housing projects, his latest single showcases an incredible amount of young potential with strong storytelling elements and a clear ear for melody –  “They can’t see my broken heart covered in Balmain.” Cartier’s delivery lies somewhere in between a Lil Durk and a Lil Tjay, marking him as one to keep an eye out for over the next few years. With New York’s rich and respected underground scene, Cartier J is in a great place at such a young age to continue fostering his career.

You may struggle to find a story as unique as Audrie Powell’s. Her nomadic mother was 17-years-old when she had Audrie, bouncing between Hawaii and the Bahamas. Music was a huge part of her life since birth, with her mother constantly singing to her and sparking what would undoubtedly become the root of her music passion. Growing up in Portland before moving to LA at 18-years-old to realise her career, Powell released her first single in 2020 titled ‘Your Girl’. Her latest cut ‘Just Another’ is a track you desperately need in your R&B rotation. Singing sophisticated and soulful vocals over the minimalistic, late-night production, the single follows on from ‘Ring’ released earlier in the year that broke her short hiatus in 2021. Influenced by the genre’s hottest acts right now –  SZA and Summer Walker – Audrie Powell will appeal to anyone tapped into the Western Sydney sounds of Billymaree and Nardean.

Filmmaker and musician Cam Be teams up with fellow Chicago native Peter Jericho for their track, ‘Cookin’. Cam is a multitalented and diverse creator, being a photographer, DJ, producer, artist and film director with an Emmy under his belt. Despite his impressive resume, Cam just doesn’t stop pushing his creative limits. Originally released in 2020 on his Summer in September mixtape, ‘Cookin’ is a slow, jazz-infused hip-hop cut. The newly shared music video is directed by Briana Clearly and features Starlotta Milan, an advocate for health and wellness in Black communities. Milan and Be worked together to prepare easy-to-make vegan recipes for people to make themselves, to give back to their respective communities and promote sustainability and health. Pairing the upbeat jazz instrumentation with his culinary-focused bars, ‘Cookin’ possessed listenability through the roof for any fans of Anderson .Paak, BJ the Chicago Kid or Thundercat.

PIP MILLETT – RIDE WITH ME

Pip Millett is the UK’s next R&B sensation and she invites you to ‘Ride With Me’ on her new single. Since first bursting onto radars in 2019 for her ‘Make Me Cry’ performance on A COLORS SHOW, the Manchester-based artist has gone from strength to strength. Her first single of 2022 comes after the release of her 2021 5-track EP Motion Sick featuring Ghetts and Gaidaa. ‘Ride With Me’, her first single of 2022, is a soft, relaxing R&B track that addresses leaving bad friendships behind as Pip says – “People often find it difficult to apologise for their wrongs which makes it difficult to sustain friendships.” Produced by Charlie Perry, the addictive single is accompanied by a KC Locke-directed music video that sees the 24-year-old take a drive into the clouds. There’s no denying the allure of UK R&B, and Pip Millett is even harder to deny.

Closing out winter in the US, DJ Five Venoms enlists Popp Hunna and Doobie for his 2022 debut, ‘Cold’. Aside from being Rolling Loud’s official festival DJ, Five Venoms dropped a triplet of trap singles featuring a handful of upcoming artists and collaborated with Kissie Lee on Kiss N’ Tell Vol. 1. After meeting at last year’s festival, the trio came to reunite a year later offering an icy, autotuned banger accompanied by a music video directed by Llama. Since Popp Hunna’s viral hit ‘Adderall (Corvette Corvette)’ and its subsequent remix featuring Lil Uzi Vert, the rapper has certainly picked his moments. With his charismatic bars and autotuned melodies, his feature performs the heavy lifting on ‘Cold’. The upcoming Ohio rapper Doobie started the year off dropping his fourth project, Misery Loves Kompany and now joins Hunna delivering his cool cadence to the track. DJ Five Venoms continues to champion New York hip-hop and connect creatives with his long list of up-and-coming collaborators.