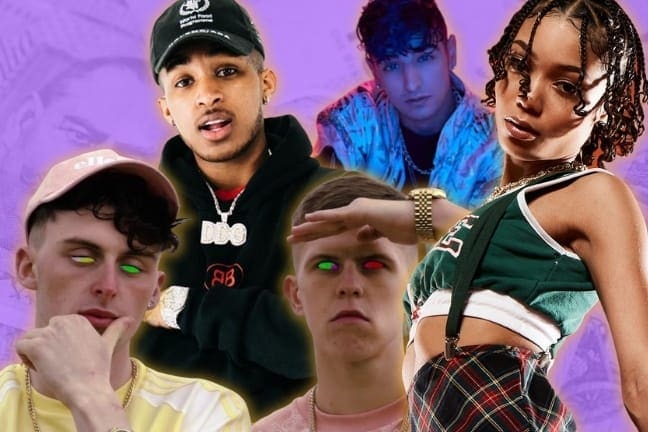 A quick wrap-up of emerging tracks from across the planet that should be in your playlists right now! Keep it locked to FOREIGN EXCHANGE; your home to some new talent regularly. Keep it locked via our socials, YouTube and Spotify, and if you’re outside Australia and keen on some AUD’$ love, be sure to drop in your latest release via Submithub.

Vancouver artist Isaac Zale enlists SoundCloud royalty Smokepurpp for his fiery new track, ‘Gasoline’. The adrenaline-inducing, synth-heavy instrumental lays the fitness mat down for Zale and Purrp to exercise flexible flows and entertaining wordplay throughout the track. With obvious chemistry between the two, Zale firmly etches himself as a competitive up and comer from Canada while Smokepurrp offers one of his best feature verses in recent times.

SWEETS – I’M NOT COMING HOME
For fans of: Boler Mani

UK’s Sweets drops his psychedelic alternative rap record, ‘I’m Not Coming Home’. Screeching through speakers with its harsh and immediate Grime influence, Sweets delivers a barrage of bars before the dreamy chorus strikes in contrast. The Manchester-based artist stated the verses “channel the anger and fire in my belly, while the hugely contrasting chorus takes you to trippy drugged-out space; a space from which the anger of the verses may stem.”

Before being crowned XXL Freshman’s earlier this year, DDG and Coi Leray joined forces for the OG Parker produced, ‘Impatient’. From DDG and Parker’s joint EP, Die 4 Respect, ‘Impatient’ holds the same viral weight of his ‘Moonwalking in Calabasas’ hit from 2020. Paired with the irreplicable and light-hearted verse from Leray, ‘Impatient’ is the perfect date night vibes.

French artist Sifoor releases his latest Afrobeats record ‘Bogota’ in anticipation of his upcoming project, O’Bosso Vol 2. Interchanging from French to English, Sifoor showcases his catchy melodies over the track’s guitar and brass instrumentation. In the past few years, Afrobeats has begun to take over Hip-hop scenes across the world, and ‘Bogota’ delivers a quick insight into how lethal a combination of French bars and Afrobeats sonics can be.

Plucked from his sophomore project Sol, Atlanta artist Téo teams up with WILLOW for the bossa nova inspired cut, ‘Buzzed’. The Colombian-American singer burst onto radars in 2017 with his debut single ‘Uno Dos’ featuring the other Smith sibling, Jaden. With ‘Buzzed’ offering soulful harmonies over the shimmering and acoustic guitar-driven instrumental, it’s clear that when Téo teams up with a Smith, greatness ensues.

New York native Ben Beal latest cut ‘Redundant’ delivers a comically honest and jazz-infused insight into the rapper’s failing relationship. ‘Redundant’ possesses a similar appeal to the late Mac Miller, with the stripped-down bass adding to the track’s mellow and Lo-Fi styled approach as the 22-year old artist jumps from sincere lyricism to bars of braggadocio. While the track dropped in May this year, Beal has kept himself busy with already seven singles under his belt for 2021.

New York’s Jay Dutch closes out the US summer with his dreamy and bouncy new record, ‘Fantasy’. The track features fellow NY artist De Royce and El Calnivoro, hailing from the Dominic Republic. Dutch handles the smooth bars in the verses before De Royce glides through with his R&B vocals giving the hook that classic feel. El Calnivoro drops a Spanish delivered verse, taking the track across the world before Royce brings us right back home with that highlight hook.

Reppin’ the DMV, Rock Abruham remixes his 2018 ‘Yes’ record with legendary New York rapper Kool Keith. Produced by Smokewell, ‘Yes (Remix)’ has evolved from the soul sampled original to its dark boom bap successor. Abruham is a clear student of the game with his wordplay and delivery striking over the more sinister tone to the track. Forever the abstract, Kool Keith jumps on the track for an ode to Craft Beer.

From the US capitol, 22-year old ARIA drops his second track of the year, ‘Bad Liar’. The alt-punk rap track details ARIA’s continuous back and forth with a love interest, rapping “Told you bout my baby, baby, you still hit me every day.” The Washington artist follows up on his 2020 presence with his best track to date, tapping into the melodic trap scene with an alternative punk edge like we’ve seen from The Kid LAROI and MGK. Relatable, dangerously catchy and massive addition to ARIA’s growing discography.

As his official debut release, UK music mogul MrMyish taps Moelogo, RoxXxan and Lavida Loca for ‘Money Dance’. Produced by Bayoz Musik and Footsteps, the party anthem delivers Afrocentric sonics, up-tempo melodies and some fiery verses from the Myish team. Speaking on the track, MrMyish explains “Money Dance is the mixture of all that’s right with the UK music scene, blending artists from multiple genres on one record.” Tune in at 0:40 to hear Birmingham’s RoxXxan drop the standout verse.

JEFFREY OLIVER – FELT THIS WAY
For fans of: Brandon Stone

Swedish rapper Jeffrey Oliver returns with his mellow R&B and trap offering ‘Felt This Way’. Despite a background in the emo hip-hop scene, Oliver branches out with his latest track by tackling a similar melodic approach to that of J.I the Prince of NY or Vory. With production from Frank Moses laying down the melancholic piano keys and trap percussion, Oliver croons to his love interest about the mistakes they’ve made and the issues they’ve created.

Composed of Casper Walsh, Eskimo Supreme and Evan Kennedy, Irish rap trio Versatile shares ‘Man On’ featuring Dania, from their debut album Fuck Versatile. As Ireland’s leading Hip-hop groups, Versatile have crafted their genre-blending sound of EDM, West Coast Hip-hop and satirical Irish rap since their debut in 2017. With the hypnotic Latin-influenced club instrumental by Kennedy AND Dania’s rich vocals, ‘Man On’ is an interesting insight into the Ringsend group’s unique sound.