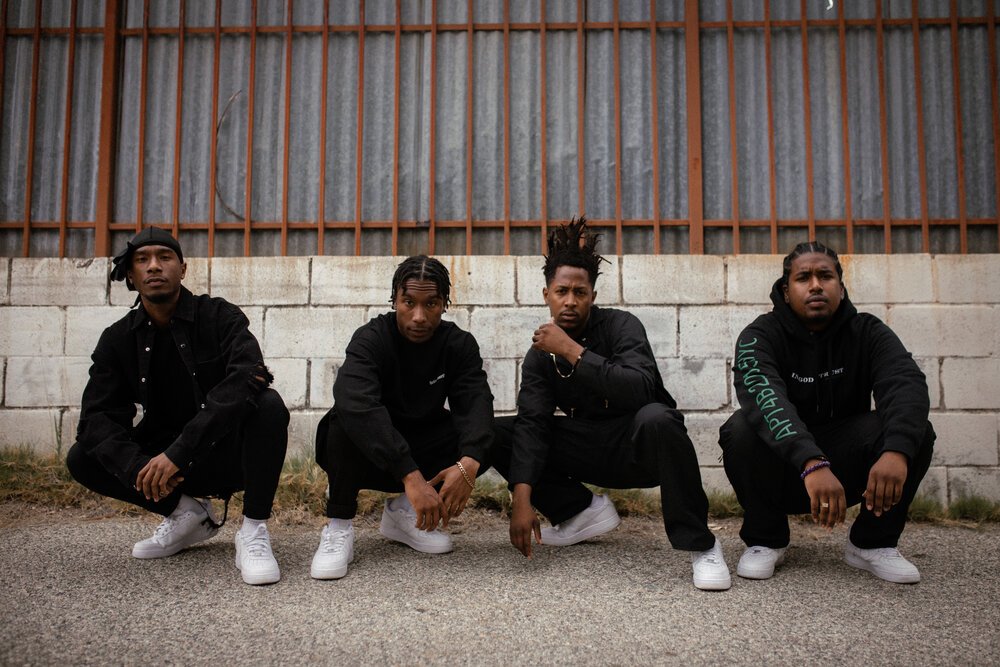 Coast Contra are the definition of mind over matter. The quartet group made ends meet by washing dishes as they shared an apartment, dreaming of success and breaking through as a hip-hop collective last year. Half of the group are twins, Ras and Taj Austin, meeting Rio in high school and Eric in 2015 when they moved to LA. Since then, they’ve performed on Jimmy Fallon, opened for Dave Chappelle at the Hollywood Bowl and recently gone viral with ‘Never Freestyle’, their ferocious 4-minute cypher over the instrumental of one of JID‘s earliest hits from The Never Story. Each solidified solo artists, the group has effortless chemistry as they switch styles and deliver veteran-level wordplay and storytelling. The future looks bright for Coast Contra, with a lot of momentum being built after their debut project Apt.505 from March.

You might not be familiar with S-X unless you’re a fan of internet mogul KSI, who has been a huge co-sign and frequent collaborator. But the Wolverhampton artist is Grammy Nominated, and deserves far more recognition than he seems to get in the widespread community. His debut album drops later this month, with ‘It’s Over Now’ being the fourth release in the build up. After previously collaborating with artists like J.Cole, Lil Wayne and Childish Gambino as a producer, a debut album has been long beckoning as he’s an multi-talented vocalist, melody-catcher and songwriter. ‘It’s Over Now’ is dark, 80’s era hip-hop/pop, featuring S-X’s crisp vocalist over the synth heavy production, and serves as an interesting sneak into the debut album which should cement him as a solidified artist.

Virginia’s own Zariyah Natalya channels her biggest influences in ‘Repeat’. Inspired by artists like Alicia Keys, Lauryn Hill, and Sade, ‘Repeat’ is a mysterious and dark track from Zariyah, leaving the meaning up for interpretation and allowing listeners to apply the song to their own life. Debuting back in 2017, she’s grown immensely as an artist with an incredible work ethic, travelling to New York for the recording and engineering on her songs. Her debut EP in 2020 was a hit and she looks to repeat that with her Endangered EP that dropped last week. ‘Repeat’ is one of five songs from the diverse project and a definite stand-out.

Rory has been in the music industry for some time now, known for his voice and personality formerly on the Joe Budden podcast and now his own co-venture, the New Rory & Mal podcast. This venture has been a long time coming for Rory, always having a renowned music palette and the platform to discuss. He has a background in executive management and other various roles throughout the industry, currently managing R&B group Emotional Oranges. Announcing an album scheduled for release this year, ‘IWYBYNK’ is the debut single featuring DRAM and Alex Isley. It’s one of the smoothest songs of the year, with silky productions and an angelic DRAM performance pairing perfectly over the quintessential R&B track.

Rick Hyde is an artist you want to familiarise yourself with now as the most recent signing to Benny The Butcher‘s Black Soprano Family (BSF). Rick Hyde is of the same ilk as any Griselda artist, leading the underground pack of new gritty street coke-rappers, a sub-genre that’s been on a meteoric rise of late. When he raps, he makes you visualise every line he spits, in true poet form. After dropping his debut album back in 2019, Stima is the long awaited follow up that released back in May. Artists like Rick create art gallery music, one of the highest quality but certainly not for everyone. It takes more than a few listens to catch everything on ‘Like This’, with every listen better than the first.

Coline Creuzot is a Houston princess, with Beyonce‘s influence still reigning supreme. The R&B and soul singer has opened for the likes of Drake and T.I during the late 2000s and in recent years, she’s made her way back into the limelight. Her music is mature and ‘For Love’ takes influence from New Orleans bounce with Coline whispering her warm vocals over the track. The LA-based artist has been offering old-school R&B love ballads for the better half of the 2010s and there’s no slowing down in the new decade.