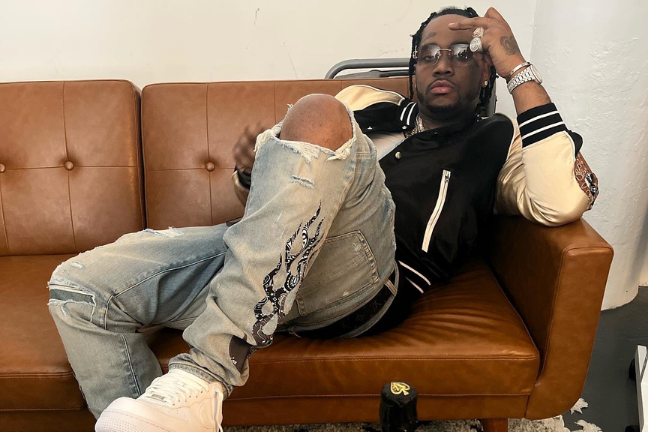 Fivio Foreign, the most recent heir to the King of New York title, has delivered his long-awaited debut album, B.I.B.L.E.

Fivio, among others like the late Pop Smoke, is credited for the drill resurgence during 2019 and has played an important role in evolving New York’s hip-hop identity. The Flatbush-raised rapper’s debut EP Pain and Love was released under a production deal with NYC legend Mase and featured his first hit, the now-platinum lead single, ‘Big Drip’.

Soon after signing to Mase’s RichFish Records and Columbia Records, Fivio built off the momentum from ‘Big Drip’ and received his first Hot 100 entries at the turn of the decade. The initial, alongside Brooklyn native Sosa Geek, was on Drake’s 2020 track ‘Demons’ while the second arrived a few weeks later with a huge New York collaboration from Fivio, Pop Smoke, and Lil Tjay on ‘Zoo York’. Serving a brief stint in prison for multiple gun-related charges, he showed his perseverance to succeed with an amazing freestyle on Funk Flex that inevitably led him to his work on Ye‘s DONDA. His meteoric rise includes link-ups with artists like Nas, Tory Lanez, and Nicki Minaj but no feature would prove more important, or impressive, than his Grammy-nominated guest verse on Ye’s ‘Off The Grid’.

It’s been two years since his second project 800BC and given his recent success, it’s now time to show his newly-expanded fanbase what he can do. Executively produced by Ye and engineered by Mike Dean, Fivio’s debut album B.I.B.L.E comes at a pivotal point in his career and is his most significant project to date. An acronym for ‘Basic Instructions Before Leaving Earth’, B.I.B.L.E sees Fivio push back on the recent criticisms of drill music and open new doors for what the genre can be.

There are a lot of great moments on this album. Kenyan-American artist KayCyy appears twice, on ‘Hello’ with Chlöe and also on the drum-less intro track ‘On God’ where he sets the tone with an angelic presence as Fivio reflects on his career thus far and pays tribute to a late friend. The second track, ‘Through The Fire’, is an editorial favourite where Fivio flips the sample used in Ye’s ‘Through The Wire’ and enlists Migos rapper Quavo to prove why he’s been one of the most in-demand feature rappers for many years. He does so again on the next track, ‘Magic City’.

Fivio finishes an extremely strong four-track run with a big SOTY contender in ‘City of Gods’ featuring Alicia Keys and Ye. The track serves as an unofficial sequel to Keys’ 2009 collaboration with Jay Z, ‘Empire State of Mind’. Paying homage to New York in dedication to his late friend, Fivio takes the opportunity to mention recent classic New York moments while reminding listeners of the grit and determination you need to make it in the ‘City of Gods’. Alicia’s vocals sound amazing over drill, and Ye delivered in typical Ye fashion; energetic, controversial, and brilliant.

The energy frustratingly slows down at some points on the album as Fivio tries to appeal to a wider demographic and push the limits of what drill can be. While the sampling of pop tracks in drill has become the latest trend, it’s hard to say it’s the future of the genre. It works on ‘What’s My Name’ featuring Queen Naija and Coi Leray which samples ‘Say My Name’ by Destiny’s Child, however, not so much on ‘Love Songs’ featuring Ne-Yo who interpolates his 2006 hit ‘So Sick’.

While B.I.B.L.E is flooded with heavy-hitting features that can at times feel unnecessary, there are plenty of other exciting guest verses – most notably A$AP Rocky on ‘Confidence’ and Polo G and Vory on ‘Changed On Me’.

Fivio has become New York royalty, and proudly carries the flag for drill in New York. He helps to deepen mainstream audiences’ understanding of the genre, further than just ‘street rap’ or catchy adlibs with enticing beats. From the viral ad-lib fuelled rapper who pushed his way into the limelight back in 2019, Fivio has been promoted from the pavement into the penthouse. Incorporating more melodies, gospel, and soul into his music (and with Ye overseeing the project), Fivio’s debut album picks up where DONDA left off. B.I.B.L.E certifies Fivio Foreign’s superstar status and as a multi-talented artist who has transcended past the boxed-in stereotype of what a drill artist is capable of. Objectively, this is a significant album and is one that will have a momentous impact on drill, hip-hop, and New York as a whole. As Fivio Foreign told Hot 97 radio listeners earlier this month: