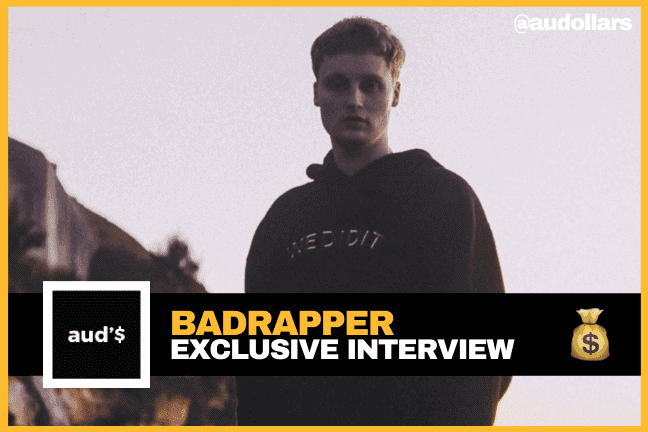 Prior to this weekends inaugural Festival X, we jumped on the phone with Australian producer Badrapper who’s on the nationwide Festival X run alongside Hip-Hop artists such as Trippie Redd, Blueface, Murda Beatz, Sophiegrophy & more.

We caught him on his lunch break from his side gig. Hustle

AUD’$: Welcome to AUD’$!
We’ve heard a lot about how your sound has been influenced derived from early Trap sounds like the Waka Flocka Flame, Gucci Mane, Rick Ross era.  Tell us about how you came into that?

Badrapper:
I started listening to a lot of early rap when I was 12/13, listening to beats and downloading music. Making beats and trying to shop them around to heaps of rappers, but they were shit haha.
My name is actually derived from that. I started trying to rap over my beats and i fucking sucked. So i gave up when i was about 14. The picked it back up when i was about 17, making heavy bass music i was listening to inspired by trap that i was listen to and i thought, whats a good producer name. Then Badrapper made sense haha

But yeah, it all came from originally making beats and wanting to make beats for rappers and really Gucci and Kanye were my two main inspirations.

AUD’$:  Coming into todays age a bit more and you’re still creating that really heavy trap sound, even working with ATLiens.
Who are you getting inspired by in todays day and age?

AUD’$: being from Australia, and noticing the scene taking off for the first time in history globally.  Who are you digging and who are you keen to work with from Aus?

Badrapper:  Me and ChillinIt have been talking for a bit now. And he’s come out for a couple of my shows and done a couple songs.  He’s probably planning on coming out at the Festival too. He’s pretty busy guy. We haven’t got around to anything yet, but i’m also going to be working with Wombat.

I have hit up OneFour but I think they’re just too packed right now.  They’ve just fucking blown up. Hopefully I can get something to those drill guys.  I’m really fucking with that drill thing coming out of Australia at the moment. Those are the main guys.

AUD’$:  Producer’s and the EDM lane over the past decade has really developed and globalised from an Australian basis.  A lot of producers in that lane doing that EMD/trap/future bass sound in Australia.
And different iterations of EDM from Australia are in the global scene/culture doing festivals/touring.
Being from Australia, seeing that develop, how do you see that happening with the Hip-Hop scene as well.

Badrapper:  It’s weird, when I first started making music there were a lot of producers doing similar shit as me, based on EDM stuff, once they made it in Australia, and they had this fkn reputation in Australia that was quite big, then it sort of made them more successful globally, and they started touring the states. and people were like okay these guys are dope now we’re trying to fuck with them type thing.  Which has always been hell weird. But its been really crazy to see the hip hop scene in Australia develop especially how fast its gone.

I remember when I first came across ChillinIT…20-30K people on Instagram and now he’s got over 160K. Getting that global recognition from Skepta and all those sorts of people.  It awesome to see that platform now for that sort of stuff that wasn’t considered cool or good up until late recent I feel.

AUD’$: being in Sydney yourself, its the centre-point of where stuffs looking like it’s starting to take off from at the moment, are you really feeling that up there in the music culture as well?

Badrapper: It’s a good scene, except it is quite hard with the current state of lockout laws down here.… it is one of the main places in Australia I see shit is happening  but it is still difficult I feel.

AUD’$: We heard the lock out laws are going to be backflipped hopefully by the end of the year.  Pumped about that? Reckon thats gonna help to reinvigorate Sydney, especially the music scene?

Badrapper: Its going to be a long process. Obviously, It s a really good step in the right direction.  When the lock out laws were reintroduced they did kill a culture that did take a very long time to build. I think it will take a least 4/5 years for it to get back to where It was prior lock out Laws, but it is a really really good step.  Now its just about making punters want to go out and not give up on any vibe in Sydney because obviously its been missing a bit with the lock out laws in place. Let’s build that culture back again.

AUD’$: Whats coming up for yourself music wise? Festival dates or anything you want to let us know about.

Badrapper: My biggest Sydney headlining ticketed show here at the end of October.  A really pivotal moment for me . Its a really iconic venue down here.  Lot of really big artists that I’ve looked up to have been through that venue.

So thats something I wanted to touch on. I’ve been working on a lot of music and that will come to light really soon.

AUD’$:  Festival x coming up that you’re playing. Which is super awesome. Bunch of international acts on that including Trippie redd, BlueFace Lil Pump, Murda Beatz,  even Sophiegrophy from Australia out here. Who are you most keen to see out of those guys? Our potentially tap in with?

Badrapper: Definitely keen to see Trippie and meet Murda.  Murda is obviously a massive inspiration in terms of production, his production, hopefully I get to fkn party with them, that would be awesome.  Also blueface will be mean so I’ll be keen to see him.

AUD’$:  Should be a good run of shows, sounds like you’ll have a mad time on it! Thanks for your time today!

Badrapper:  Well thank you bro, awesome thanks for the interview.

Catch Badrapper live at Festival X this weekend causing a rage and prepare by listen to his biggest hit of 2019  ‘FIND YOU FT. KONOBA’ below! ????