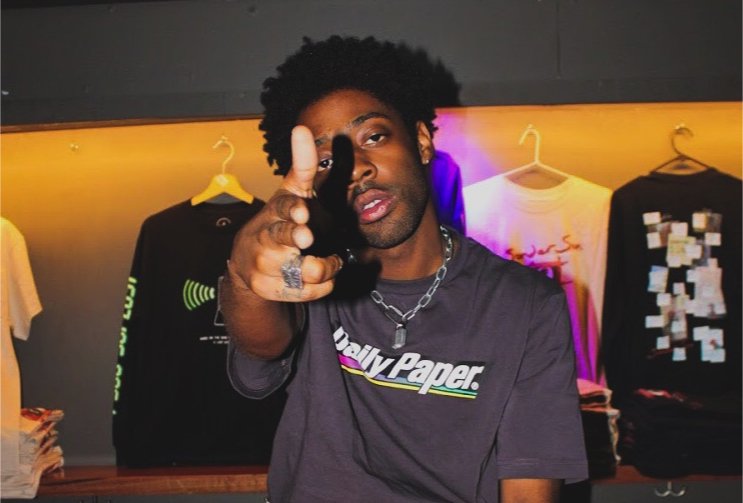 It’s the first week of January. The hottest Melbourne day in 3 years. Doors at Max Watts aren’t open for another 5 hours. But none of that can stop a buzzing crowd from building on Swanston St, all hoping to catch a glimpse of R&B’s next global superstar.

Inside the venue, 23-year old Maryland-born Brent Faiyaz is doing run throughs with his live band before their debut show in Australia’s live music capital. Despite being quietly announced months ago for a venue less than half the size, the show sold out at lightning speed. As did the venue upgrade. It’s clear that the street hype around Brent Faiyaz is real, even if he’s only afforded a fraction of the coverage of his major label counterparts.

While at this time of year most international artists are down under for the one-two punch of festival appearances and big press runs, coupled with a handful of select gigs; Brent Faiyaz isn’t most international artists. He & his Lost Kids team do things different. Independent. And so far that’s resulted in a Grammy nomination alongside Goldlink for the infectious ‘Crew‘, a Beats 1 Radio takeover, and a Donald Glover co-sign on hit-show Atlanta. We sat down to talk after soundcheck.

At well over 6 feet tall, Brent Faiyaz is poised and softly spoken during our conversation. Possibly because that’s his nature, partly because he confesses to partying the entire time he’s been out here. And not for the first time. He was out here last year, rather unassumingly at this very venue. Side of stage while close friends and collaborators Goldlink and Denzel Curry performed. His manager Ty has an Aussie cousin and so escaping the cold winter of North America while simultaneously sewing the seeds for a future tour sounded like a great idea.

And that’s where we start our chat;

You’ve built up a global reputation as a strong independent artist. Both yourself and your manager Ty are pretty outspoken about this. Tell us about how you guys linked up…

For real. He hit me randomly on the DM back when I was doing both singing and rapping. He started saying shit like ‘You’re doing this and this right and this and this wrong.’ I was thinkin ‘Who the fuck are you?’ But then I started listening to him and he started helping with blog premieres n shit. This is like back in 2013 when blog were everything. We just built the relationship. We had plans to sign to a label at some point but they were offering bullshit. Naturally over time we just built into our own whole independent thing. At first it was just circumstance. But now I’m seeing everybody keep getting fucked. People got their hands in the cookie jar when it comes to this music shit. Your favourite artist is getting hella taken advantage of by these labels. And fuck that.

That’s interesting, because your music constantly talks about your crew, your circle, your gang. It seems like now, being independent is really important to you.

That’s huge! Didn’t you guys just score a Beats 1 Radio show together? What else is planned?

Yeah. We took over Ebro recently. The opportunity just presented itself. They fucked with us and we were like bet. We wanna do a radio show. It was mad organic.The way this Lost Kids shit is set up. I got my brothers doing it with me. We got Acting. Music. Photography. Directing. The whole idea is to take Lost Kids and the music that we got now and turn it into film, fashion and music. All across the board independent all the way.

BIG. So you combine that vision with something like a Donald Glover co-sign, and anything’s possible! How was that moment for you?

That shit was wild man. People was hitting me that they heard me on the Atlanta trailer . And I was like damn!? I didn’t make that song with the intention of it being anything more than a great song you feel me?. So I’m glad someone of that calibre, like Donald Glover, decided he would give someone a shot and put it on his platform. That I respect. Cos you can be a huge guy and not take the time out to really put the younger, little guy on…. And they paid us good for that shit too haha.

Seems like it’s been a fast journey. Talk to us about where you’re at now. What’s the story behind the latest EP?

The Lost EP gave me a chance to dig a little deeper in the story. With Sonder Son everything was so music driven. Even the stories I was telling and things I was singing about was music industry stuff. With the EP I got a chance to take a step back, chill and embrace the hype the album received but go into a new project with a clear head. With so much shit going on in the states right now. So much police brutality, injustice and wild shit going on. I’m like in the middle of Hollywood. I see junkies every fucking day. Im hearin’ sirens every day ya feel me? So I might as well take the life that I’m living right now and put it into music.

Yeah on that note…. you mention police brutality. There’s the ‘Nobody Cares’ interlude on Sonder Son where it states that not Trump, not your favourite artist, nobody gives a fuck. Does Brent Faiyaz give a fuck? And if so, what about?

Mmmm…. I give a fuck about music. I give a fuck about my people. I care about making sure that originality is being shown. I feel like everybody is on the same shit. On the same wave. But I feel like originality is the key to making shit go crazy in 2019/2020. I feel like everything is coming to light. Especially in this social media era. Everything is being shown. It’s like a big awakening period or some shit. Everyone is kinda seeing that ‘don’t nobody really give a fuck about us. Even if you really pay attention to a horrible story on the news or on instagram or whatever. If you look at the comments it’s just a whole bunch of people making jokes about it. So I’m just seein’ it like man, nobody gives a fuck. So I’m just giving a fuck about giving a fuck. I’m still figuring it out though.

Aight. Bet. Then let’s talk about music. About R&B. Where’s the genre at right now?

For real I don’t even be thinking ‘bout it. I take it a song at a time. I don’t go in the studio and be thinking about the R&B genre as a whole. It’s more like how I’m feeling that day, I hope someone can relate to it. I just happen to like guitar and those sounds haha.

Yeah, your music has so many nostalgic 90’s vibes. Is it true Lauryn Hill and Pharrell are some of your main influences?

Pharrell the GOAT. No doubt. That’s my dream collab right there. And Lauryn Hill? Being young. That shit was always played in the house. My mom put me onto that..

*** this question is interrupted by the house engineer blaring new Brent Faiyaz cut ‘Around Me’ so loud we couldn’t hear each other. After I let him know it’s my favourite joint of his, he daps me up, asks the engineer to turn it down, and we resume the chat with me asking about the current ‘King of R&B debate’ – and whether he reads the Youtube comments stating it’s him ***

Nah haha, I’m not even on it. I feel like that shit kinda corny. I don’t wake up thinkin I’m the King of R&B or shit like that. I’m just making songs ya feel me?

Haha well bout them songs. What can we expect from the new stuff? What’s next in the Brent Faiyaz music journey?

Wherever it goes man. I like reggae shit. I like soft rock shit. I like all kinds of stuff. I know with the team of creatives I got around me. I know that anything we decide to make we can execute it in a way that’s high quality, just like everything else we do.

Dope. I’m looking forward to hearing it. Before we wrap up though, what’s your advice to other independent artists? A final word for the kid reading this interview before uploading a song to Soundcloud…

More than anything just focus on the craft. A lot of people tell me they wanna get into music and they so big on making money. Everything is like ‘I wanna make money, I wanna be on I wanna have some clout, I wanna fuck bitches’ – and yeh everybody wanna do that shit. But focus on really being good at what you do. Cos everything is gonna come after it. More than anything, if you make songs – get it to the point where you listen to that shit and you’re like “Damn. This shit is good!” and then everybody gonn feel that way too.

A few hours later I return to the venue to witness a pretty spectacular show. While theres 800 people all consistently screaming at the top of their lungs, for Brent there might as well have been a dozen of his closest homies. He makes it look that easy. Almost nonchalant. Amongst a crowd of faces he manages to connect with individuals at different points of the set, serenading them with his angelic falsetto and a moment of eye contact. It’s no doubt too soon of a comparison but the live band (who he introduces individually and allows to take the spotlight at moments throughout the show), smoky haze and hysteria inducing hip-thrusts give the whole night a sexy 1970’s James Brown-like vibe. It’s a show built on equal parts talent and charisma.

While I was expecting a crowd that knew the lyrics to ‘Crew’ and maybe not a whole lot else, I was both shocked and excited to see how many day one fans Brent Faiyaz has in Australia. It’s the foundations of a big touring career out here. Anything from debut E.P AM Paradox drew the biggest response, while Gang Over Luv united the room in a mass singalong as the show slowly evolved from a live performance to one big celebration. With his latest releases blaring over the system and a crowd hanging on his every move, a bottle of Henny replaced the microphone and Brent Faiyaz – not the potential King of R&B – just a dude from the DMV who gives a fuck about his people and his music – was ready to party.