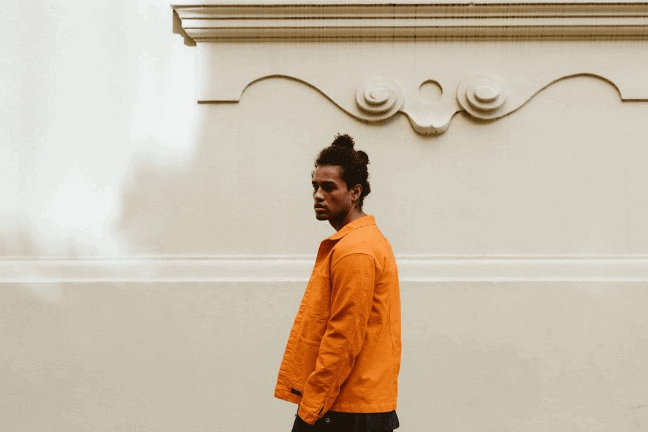 Sonically, thematically and culturally; Ziggy Ramo’s confronting and timely new album, Black Thoughts, is a compulsory listen for all Australians. While the Sydney-via-Arnhem Land artist originally released a three-piece EP of the same name in 2016 after a period of hospitalisation, now some four years on, Ramo delivers the 16 track full-length project amidst a pivotal moment in the civil rights struggle of 2020 that is Black Lives Matter. Accompanying the protests across the nation, Black Thoughts is a powerful commentary on Australia’s history, hoping to incite conversation and change. While it’s not his role nor the duty of any First Nations person to educate White Australia, Black Thoughts is a personal, insightful and fundamental tool to begin your reflection.

Black Thoughts maintains Ziggy Ramo’s clean Golden age style immediately evocative of Joey Badass and his sophomore album All-Amerikkkan Badass. The album kicks off with intro The Beginning of the End and Black Face; a song motivated by a 2016 incident when a Perth mother painted her son’s face brown as he imitated AFL player Nic Naitanui for his school’s book week. While the incident highlighted an educational divide across the country, this album reflects on and embodies a quote at the time from Indigenous affairs reporter Allan Clarke: “Let the people of colour define what’s racist. Let them define what’s offensive to them.” Ramo never tiptoes around the topic and sends commanding statements on discrimination through uncompromising lyrics “You paint your skin black but you don’t wear it as your own Australia, grow a fucking backbone.”

The album continues with its first interlude titled Survival Day, featuring audio from women, men and children expressing their opinion on Australia holding a public holiday for the anniversary of the First Fleet landing in New South Wales on January 26th. What is so valuable about Black Thoughts is the inclusion of relevant audio like the Lang Hancock interview at the end of White Lies. These audio clips complement and support the narrative of Black Thoughts and admittedly, educated me further on the abhorrent and blatant public racism throughout the decades. Ziggy discusses the remorse Australians demonstrate towards the ANZAC’s on “April 25th” and contrasts this to the neglecting attitude towards battles Australia has faced on its own soil. 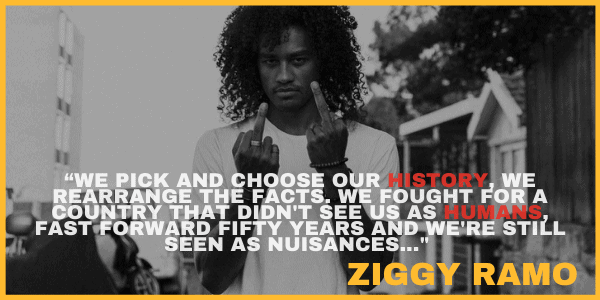 It’s this generational trauma that Ramo refers to again, beginning Stand For Something by reciting an anonymous poem first published in 1971: “At the white man’s school, what are the children taught? Are they told of the battles our people fought? Are they told how our people died? Are they told why our people cried? Australia’s true history is never read, but the black man keeps it in his head.”

Ramo’s storytelling represents this generational trauma, with references to the Stolen Generation where the ramifications are still felt, and more contemporary issues like the criticism of Adam Goodes that Aboriginal Australians are experiencing first hand. It’s Ziggy Ramo’s hard-hitting one-liners that truly make Black Thoughts memorable and quotable. Another example of this can be found on Secondary, where Ramo opens with the encouraging but distressing line – “Don’t ever let them tell you that you secondary. We survived a genocide, we legendary.” Flames proves that Black Thoughts is not a complete message, it’s a brief insight from an important perspective that will “spark the fire” for a larger conversation Australia must-have.

Despite no musical features on the album, Black Thoughts gives a platform to many more important voices, including Steven Oliver whose poem I’m a Blackfella is sampled for the last interlude. Closing out the album, Final Thoughts features a soft-spoken Ziggy being interviewed on his upbringing as he stretches out the album’s themes. Discussing Australia’s lack of pride in having the oldest culture and Indigenous youth suicides, Final Thoughts doesn’t pedestal Ziggy but instead grounds him an empathic human equally frustrated, heartbroken and confused by these issues.

Ziggy Ramo has crafted one of the most important albums in Australia in 2020. And he did it some four years ago. Black Thoughts is confronting, necessary, and is supposed to make you feel uncomfortable. Ramo presents his debut album in a rich New York, near boom-bap style, providing listeners with a powerful and informative commentary on the ongoing racism and injustice in Australia. Discussing matters from as far back as 1778 to 2016 when the album was recorded, Ziggy Ramo once again owns his sound and harnesses his talent as a lethal lyricist to deliver something greater than the music itself.

If there’s one album to recommend at this time, please give Black Thoughts by Ziggy Ramo a listen

Review by Frank Tremain. Follow him on IG @ftremain.jrnl and keep in touch with us via @audollars.