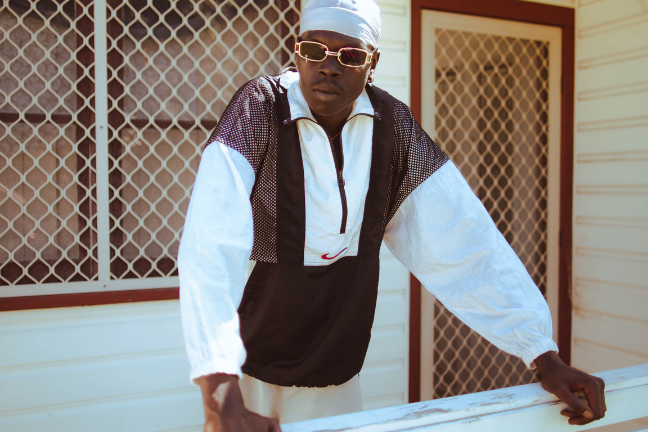 Long before it was fashionable, Big Skeez was one of the first people repping Western Sydney and helping put the area on the map. Since bursting onto the scene in the middle of the last decade as the first notable African-Australian artist showcasing Trap sounds via ‘Whip It’, Big Skeez has become a staple in the domestic hip-hop landscape. From inspiring younger, emerging artists to appearing in the typically exclusive publications of GQ and Vogue, there is no argument that the ‘Wavy Badmon’ is one of the OG’s of the current AU global generation.

Letting his personality and African roots shine through his music, Big Skeez is noted for his authenticity. His extensive journey has seen him evolve sonically, from igniting local trap to more recently pushing Afrobeats to the forefront; Skeez has always had a vivid approach to storytelling, as displayed in the first-ever AUD’$ Radio cypher back in 2016 for which he traveled interstate, just to get the opportunity to shine.

“I was more experimenting and trying to get my sound, but now I’m more established.”

When Big Skeez started out, Australia was at a point culturally where artists had to hide where they were from. But in 2022, he’s paved the way for a younger generation of artists who have adopted similar sonic styles, as well as the intrinsic pride in their heritage. Western Sydney has long been subjected to a perverted, negative reputation throughout mainstream (aka ‘white’) Australia, but through their art, the likes of Skeez, OneFour, and Spacely have helped to ease that stereotype and create a more positive image of culture and innovation.

“It’s the best to see people embracing their culture into their music, now I’ve seen more of that.”

As is the case for a lot of the current era of Australian hip-hop pioneers, Big Skeez found the majority of his musical inspiration from international influences. Looking up to a lot of UK and French acts, particularly the wider European hip-hop/afrobeat scene, he took elements of their sound and blended it with his own culture; ultimately helping him find his own niche lane.

“I’m trying to get to Europe and work with these guys..Inshallah”

Skeez’s biggest single to date, the big-room infused ‘Where Yuh From’ featuring Gold Fang was everywhere when it dropped in September last year. Despite not thinking it anything special when recording initially, Gold Fang heard the record and demanded he jump on it. Immediately after hearing Fang’s contribution, Skeez knew he had a hit, it was finished up and released only weeks later.

“I heard it and I was like man, we gotta finish this track. So, I went back in there and we got it done and yeah, released it, and it’s great. It’s on one of the greatest tracks I’ve ever released.”

Big Skeez has never stopped working or innovating to help push the Australian music culture forward and so the recent signing with Nina Las Vegas’ eclectic label NLV Records while surprising to some, made perfect sense. It’s within this organic house of talent that he is currently crafting his next two releases before an expected EP later in the year.

“Her [Nina] letting the artist do what they want to do is one of the best things ever, you know what I mean? And it helps a lot man.”

Check out our recent interview between Matthew Craig and Big Skeez down below where he talks about the current climate in Australian hip-hop, his artistic inspirations, and being from Western Sydney, as well as taking part in a round of AUD’$ Rapid Fire.