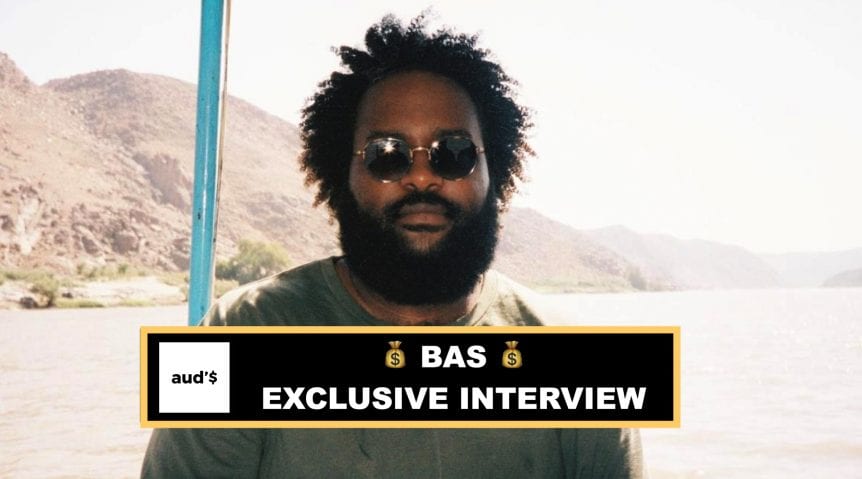 [et_pb_section bb_built=”1″][et_pb_row _builder_version=”3.9″][et_pb_column type=”4_4″][et_pb_text _builder_version=”3.9″ text_orientation=”justified”]
Milky Way was one of my favourite albums of last year. Packed with great vibes, catchy hooks and a unique mix of cultural elements; there’s rarely a day at my place where Tribe ft J.Cole or Boca Raton ft A$AP Ferg aren’t pumping out the system. Despite not having the mega-profile of some of his counterparts, Bas and his music have quickly become ubiquitous in modern pop culture (just ask any FIFA player!). And neither he, nor the prestigious Dreamville roster to which Bas was the first J.Cole signing back in 2014, and now boasts names including J.I.D, Ari Lennox, EarthGang and Cozz, show any signs of slowing down.
Following the overwhelming success of the massive Revenge Of The Dreamers III label project in July, the Queens rapper bucked the album cycle trend and in only a matter of weeks delivered a 4 track EP – the first ‘crate’ of his Spilled Milk series – alongside the announce of his first Australian tour since 2017. In typical Bas style the project is full of fun; witty & relatable lyricism across a mix of global soundscapes including South African house, Brazilian baile funk and Afrobeats.
I caught up with Bas over the phone just days after the release of Spilled Milk and we talked in depth about the project, the excitement at being part of the Dreamville family, and the challenges of being a Sudanese artist in today’s world.

Hi Bas, man great it’s great to meet you…
Wassup Matt? Likewise bro!
Yo! Revenge Of The Dreamers, Spilled Milk…how does it feel to be Bas right now? How does it feel to be part of Dreamville? It must be exciting to be part of that house right now…
It is man. It’s a beautiful thing. Lots of hard work and years of being at it. It feels like we’ve broke through our first glass ceiling of sorts. We’ve all been touring for years and building the platforms for a while. And the networks with our peers and producers. And this feels kinda like the first time all the dominos have stacked up and all our efforts over the years can culminate in a moment.
Yeah, it seems beautiful man. I’ve watched the documentary and seen some behind the scenes of your guys working together. And what stand out to me is that closeness, that family vibe. Songs like ‘Self Love’ show a real vulnerability and sense of unity shining through among the group…
Yeah I don’t think you can fake that. And that’s why the music came out the way it did. You know it’s one thing to go in the studio and work with someone new and it’s another thing when there’s familiarity, comfort and chemistry. That allows more trust between the artists. It allows more communication of where you want the song it end up. It aids in the collaborative process. And us having those relationships both inside, and with the artists outside our camp, it was crucial to just strip away the egos and make music, just; ego free.
Mmm I really feel that message is coming through in the music, not only that project, but congratulations on Spilled Milk! Where does this sit in the catalogue? What’s the next chapter being told in the Bas story because it seems there’s a lot happening!?
Yeah you know, for me; I had a bunch of these collaborations. Everything from Spilled Milk is a collaboration. I’ve always been proud of how I collaborate with other artists and being able to do that. But for me, this is the first year that I’ve put out music two years in a row. It’s usually a long gap between album cycles, and I really wanna buck that trend. Release music freely and have more content out. Make music and release it when I want. And that’s really the message behind Spilled Milk. Let it spill, put it out there. In between my big solo efforts, it’s good to still link-up with other artists and do some work and let the fanbase enjoy it.
Absolutely. And the timing! Releasing it in crates. I’m not sure if you’re aware but ‘milk crates’ are the leading trend or meme in Australia right now. Earlier this week we had an incident in Sydney where a man had to be restrained by a member of the public. And he did it with a milk crate. So milk crates are trending Number #1 on twitter right now, and I guess congratulations on a perfect rollout haha!
Hahaha! Oh man I’mma look that up. No way. That’s great. That’s content!

Haha! Bro, personally Jollof Rice is my favourite off the new project. Tell us, what’s the storytelling that’s coming through? You’re obviously very proud of your heritage. What’s the message you’re portraying through these tracks?

Yeah, I think for a long time my story was just told as that of a New York artist. And that’s because there’s so many layers to my story; I was born in Paris, I grew up in New York, my family’s from Sudan. I spent a lot of my childhood summers in Sudan. And as an adult going back to the African continent, travelling more, and also being inspired by all the sounds and the culture coming out of the continent – wanting to amplify that as part of the diaspora. I just really want to show more of our heritage and more of that culture. To really bridge that gap – to my friends in New York, or to my friends in Sudan, I’ve always I guess been what they call a third culture kid. You know, always belong to an outside culture, no matter where you’re at. Just socially, and in life, that’s been a big part of who I am and I’m just learning more how to convey that in my music.

It’s incredible you say that man because there’s a current… almost renaissance…  going on in Australian urban music at the moment, and a lot of it is fuelled by exactly what you say – people from an immigrant background in sort of a third culture space. And a lot of that coming through is of Sudanese or South Sudanese origins. We’ve got a lot of young talent telling their stories. What would your message or your advice be to them? Cos you’re seen as a bit of a role model in that community out here.

Yeah, you know what? That blows my mind! I been reppin’ Sudanese, or South Sudanese or Eritreans, Ethiopians, Somalis all over the world and the love is overwhelming. And it reminds you, we’re from a part of the world that’s underrepresented as far as global music goes. And a lot of that is how we’re raised, you know just generational gaps between us and our parents. Them having to chase security and the arts not being something that they were privileged enough to explore. And that’s something that the youth are getting a chance to do, and we’re getting to express ourselves. So, I would just say that it’s gonna be tough. You’re gonna get a lotta push back from your community and maybe from your elders. And they don’t mean it in a bad way; they just came up in a time where security was the most important thing. But we’re privileged through their work to have that. So it’s time for us to tell the world our story, give the world our perspective. And that’s a way we can do a service to our people, reminding everyone we’re not all so different. You know, you can hear it in the music. We all have similar wants, needs and goals for our families. We wanna express ourselves, and I think that’s a great service to our home countries.

Beautifully said. I know your fellow countrymen and women are going to be coming out in droves to see you man. And I’d love to connect you with some of them, because there’s some beautiful things happening out here…

Yeah absolutely! Please do! I’ll make sure to get all your information and we’ll link up when I come out there in October…

That’d be dope man. Are you excited about coming to Australia? You’re coming at the right time of year… the weather’s getting warmer… what are your expectations?

Super! You know, I came out with J Cole on the For Your Eyez Only tour and that was my first time. And I was blown away. It was just so much fun. So much energy in the crowds, some of the liveliest crowds I’ve ever seen. So, I’m expecting great things haha! Some great shows, great energy. I’m expecting to go out and have a great time in the cities. And I’m praying to catch all my flights… because that’s always a challenge haha.

Haha. Always a problem out here that top flight! Final question; what’s next? Can we expect any videos off the Spilled Milk series? What content are we gonna see before you hit shores?
Yeah, I actually just got the cut of the Jollof Rice video today so we’re dropping that one soon. I shot a video for Nirvana while I was out in Tokyo, so that’s all in the edit. We definitely have a bunch of videos coming from that. And also August 24 thats a year since we put out Milky Way, and so I’m gonna put out one more video… actually that we shot on our African tour… and yeah I have a bunch of footage from that. We just sorta put a video together to show love to Milky Way one last time.
Well we look forward to it bro. Thanks for making time. It’s a pleasure to talk. On behalf of Australia, of AUD’$… man we look forward to having you and to linking up and introducing you to the community when you’re out here.
That’s a bet. We’ll see you soon bro…
💰🤞🏽
Spilled Milk is out now on Spotify, Apple Music and more. You can catch Bas live in Australia this October. Details below. Tickets here.
Words by Matthew Craig (@whatmsees_rmf)
Images supplied.