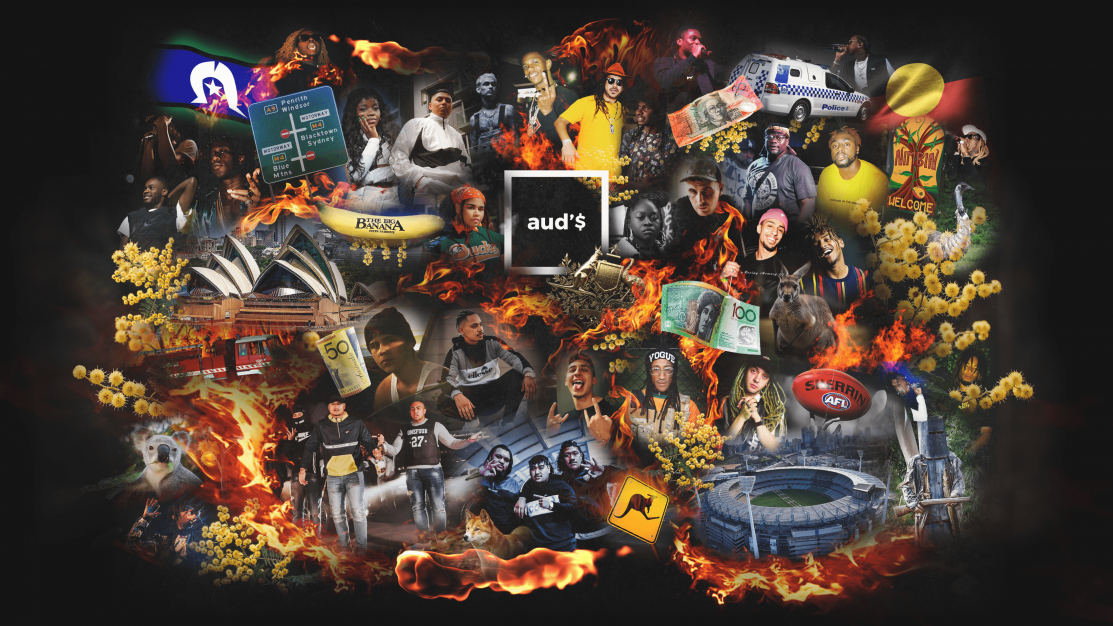 It’s hard to believe we’re here. What started off as a live-streamed DJ set in a basement studio on a broken iPhone 4 has grown to become one of the pivotal ecosystems within the Australian entertainment scene. AUD’$ was born to help showcase our diverse local talent to the whole world. And with the help of some incredible artists, valuable partners, and a strong, supportive, inclusive community, we’ve made significant steps in achieving that goal every single day for the last 5 years. Below we’ve wrapped up 10 of those key moments to reflect on proudly and to motivate us to keep taking ca$h culture to the globe for a long, long time…

Two weeks into the first season of AUD’$ radio on Melbourne community station SYN.FM and three young African-Australian brothers by the names of Kae The Goat, Lord Levi, and Big Skeez blessed the mic over a Pro Era instrumental. The chemistry was instant. It was like watching Sway In The Morning. But in our own backyard. The footage went viral on Facebook. Requests to be on the show flooded in. The new wave had begun.

THE KID LAROI IS DISCOVERED

Momentum had started building on AUD’$ Radio when just over a month into the show, Junor featured a track from a young duo called Dreamsteam that would change the Aus Hip-Hop landspace forever. Eye catching confidence oozed from an unkown 13 year old prodigy known as Laroi as he spat with a maturity beyond his years. Listeners instantly fell in love and those in the know we aware something special was on our hands. It would be another year before indsutry would call and Triple J would champion the now global megastar The Kid Laroi. helping launch the career of a generational talent. But those who have been following AUD’$ since the jump will remember where it all started.

For the first time AUD’$ received media accreditation for a major festival when JVMANJI granted the team AAA access backstage to capture footage. Link-ups happened with Iggy Azalea and Madeintyo before the legendary Lil Wayne hit the stage. Mid-way through his set after some members the crowd had thrown projectiles on stage, Weezy paused to issue a stern warning to those in attendance. Footage of the incident captured by AUD’$ was soon plastered (stolen) across the internet from TMZ to Billboard as it became the most talked about moment in hip-hop globally.

Barely a year into the AUD’$ journey and a mammoth team effort managed to pull together artists from across the country in Melbourne for the filming of The Vault Cyphers. Then emerging artists including Kwame, Olive Amun, Jannah Beth, and the late, great JJay De Melo gathered to display their best bars via an independent, grassroots platform. For all in attendence it was an unforgettable moment of unity and comradery that will live forever online.

CULTURE ON FULL SHOW AT BIGSOUND

AUD’$ announced our presence at the nation’s premiere music industry conference in 2017, partnering with Call & Response and later MTV to present the biggest Hip-Hop showcase during BIGSOUND week in Brisbane. A packed out venue full of excitement and talent became an annual staple which helped present names including Genesis Owusu, Jesswar, Triple One, Carmouflage Rose at the early stages of their careers.

AUD’$ RECOGNISED BY THE FYA

Since day one it has been AUD’$ mission to connect the world to the diverse face of Australian hip-hop culture; to help build superstars and role models for future generations of young talent to identify with and aspire to. In 2018, co-founder Matthew Craig and the AUD’$ platform were recognised by the Foundation of Young Australians as one of the Top 40 social enterprises run by people under the age of 30. An early moment of validation which helps propel the ongoing vision to this day.

LAUNCH OF ‘THE NEW AUSTRALIA’ WITH APPLE MUSIC

As the landscape began to grow and evolve alongside AUD’$ reputation for discovering the best raw talent, Apple Music developed their ‘The New’ playlist locally, highlighting the best emerging hip-hop and R&B sounds from down under. Launched publicly during ARIA week by Zane Lowe, the playlist would be partnered by a Briggs hosted Beats 1 radio show, with feature tracks chosen from a playlist co-curated by Apple Music and AUD’$.

After years moving between basement and garage studios, AUD’$ found a permanent new home in 2019 at Marshall Street Studios in Melbourne’s north. The world class facilities would enable a massive increase in production quality, hosting interviews with international names including Sheff G, Rico Nasty, and Ghetts, while also becoming a recording base for the likes of HP Boyz and Onefour.

The only thing evolving quicker than the Aus scene has been the technology around it, and AUD’$ has been at the forefront of both these changes. In one of the most significant moments of 2021, TikTok and AUD’$ launched a brand new #HipHop hub on the platform, presenting a one-stop shop for users to explore key artists, songs, playlists and videos from the scene, all linked directly to the home page of the app.

In July of this year, when long standing JJJ Hip-Hop Show presenter Hau Latukefu took leave, he handed the reigns to AUD’$ for a couple of weeks, allowing Matthew Craig and Junor to spin some of their favourites from across the AU. Always doing it big, the boys brought in guests HP Boyz, POSSESHOT, 66 Records, and Clariyah Bo$$ for major interviews on the national broadcaster while giving several emerging artists their first spin on the J’s.