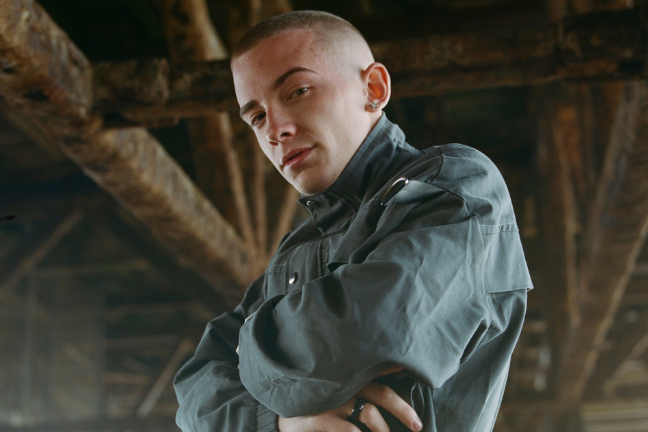 In what seemed like a come-up too good to be true, UK artist ArrDee refuses to give in on his debut mixtape, Pier Pressure.

In the UK’s competitive drill scene where it’s often difficult to gain recognition, you must earn your stripes. Last year the 19-year-old rapper found viral success with his breakout and career-changing feature on Russ Millionz and Tion Wayne’s ‘Body (Remix)’, shortly followed by his solo hit ‘Oliver Twist’. While some were still not sold on the Brighton-born and raised artist, he proves he’s a more than capable emcee on the 14-track mixtape.

“It’s funny, I had a completely different name for it but we were just outside before a club show one day and my DJ was like, ‘you should call it Pier Pressure.’ At first, I didn’t understand he was talking about the pier like where I’m from. I was like ‘yeah that’s a fucking sick name, I’m going to take that and use it.’”

Referencing both the beloved landmark in his hometown and the battle of expectations in the music industry, Pier Pressure features previously released singles including his Destiny Child’s sampled ‘Flowers (Say My Name)’, ‘Early Hours’, ‘Come & Go’ and collaborations with Aitch, Digga D and Tion Wayne. While the country town of Brighton, described by ArrDee as a “madhouse”, isn’t necessarily known for its hip-hop presence – he’s quickly become one of the hottest acts in the UK.

“Becoming sort of the main face of the town, in terms of current music and what’s going on, it was hard to navigate at first because obviously there’s so much rap music down there that a lot of people were expecting me to do this and do that, and there were a lot of people that wanted to get brought in.”

Influenced by early 2000s rap superstars like Eminem, Lil Wayne, and 50 Cent, his global takeover is well underway. Boasting over 7-million monthly Spotify listeners, he hasn’t forgotten Sydney as “one of the first international cities outside of the UK” to rock with him early on. Planning to tour sometime later this year, ArrDee is also eager to connect with like-minded homegrown talent such as the 420Fam leader.

“Chillinit is my guy, he’s cold and definitely someone I want to work with as well. There was something that was going to happen on ‘Flowers’ but it ended up not working. 100% we’ll end up working.”

Across hard-hitting party anthems and bass-heavy storytelling, Pier Pressure is an impressive highlight reel of Arrdee at this early stage of his bubbling career. Rising to the top of the UK charts for his larger-than-life drill tracks and keeping his feature contributions minimal on the new inclusions to his catalogue, there’s really no denying him any longer. ArrDee has arrived.

Stream the ‘Pier Pressure’ project and read the discussion between Matthew Craig and ArrDee below.

AUD’$: Tell us a bit about the project bro, congratulations I’ve had a listen to it and was thoroughly impressed, my man. It’s an incredible body of work, how does it feel to have put a body of work together after what’s been a pretty rapid come up?

ARRDEE: “It was just a thing where a lot of people were not expecting a downfall, but almost in that sense, because the come up was so fast and so rapid. We had the body remix, that obviously propelled the come-up, a lot of people were expecting a little fall off or a slip-up or for something to go wrong. Which was actually one of the reasons why I have very few features on the project just so that, not to prove myself or prove a point, but almost in that sense just to show that I can create a body of work.”

Give me a bit of insight into what life was like growing up in Brighton man, obviously a place not really known for hip hop and somewhere that you’re putting on the map. What was navigating that like for you?

“Well, in terms of actual hip hop rap, like it is very full and cultured in terms of that kind of style of rap. Like obviously it’s a lot of skaters and yeah, there’s definitely a lot of that around but it’s more like boom-bap and 90’s. The main face of the town is currently house music and it was hard to navigate at first but you just kind of get used to it. But it was me growing up and Brighton is kind of a madhouse to be fair, like this town does not sleep, there’s a party somewhere every single night. Very easy to get lost in. I got lost in it for a little bit, at least in the summer anyway when there was somewhere for me to be every single night and it wasn’t freezing.”

What were some of those rap influences you looked up to coming up?

“When I was younger I was a lot more American rap than listening to some more from Brighton to be fair. But I got to secondary school and I’d heard about Ocean Wisdom. And obviously, he goes in and is fucking sick as well, and does got a lot of talent, and I listened to him in secondary school. But growing up it was more like Eminem you know, Wayne, 50 Cent people like that around that little era. Because I’m where I’m from, even if it is close to London, it’s not as tuned in. So Grime or London local rap, like UK rap didn’t really flood the streets or whatever you want to call it until I was about 15/14.”

The project feels intentionally a lot more personal and insightful. Is that you trying to show off different dimensions to yourself?

“Yeah, 100. Even though a lot of what I’ve done, and a lot of what people will know about me, is the party. I think it’s good to show layers; for one just as an artist in general, but also as a person and to show that everybody goes through things. It can’t be nothing but a good thing to show that there’s two sides to life and to just show that everybody feels things and goes through things as a person, whether you’re an artist or rapper or a singer or fucking paint, or wherever you go through.”

The record that really stood out to me, bro was ‘Pandemic’, can you let me in behind the story behind that record?

“Well, to be fair, it’s all real. It’s about kind of technically two people I know. Like, I’ve kind of merged the stories together because I wanted to shine a light on both of their stories. The news, BBC, and like, wherever media round here kind of sheds a big light on London but I’m from a country town and there’s
towns all around the outskirts of the country going through the same thing, but they don’t shine a light on us. Because London is so expensive in it so if you’re poor from county land town rather than London, it’s poorer in my opinion in comparison. One of the people that I’m speaking about is still in prison. Now we speak regularly on the phone. And I think it was just nice to touch on the subject, too. It was on my mind constantly because we spent so much time on the phone and it was somebody that believed in my thing. Right before I blew he was in prison, so he hasn’t seen anything of it being a big thing in the public eye yet.”

Have you ever changed the way you move at all? Has it felt overwhelming at any point?

“I still live in my hometown. And yes, it’s quite a chilled place in terms of like, as much as people still want pictures, and it’s fine and everything, it’s not like London where it’s a million miles per hour and there’s XYZ going on and you’ve got to be really safe and really careful. So in a way, yes. But, you know, when I obviously have to be careful where I go and who I’m with and go on a show, I’ve got people around me that are going to protect me if anything goes off, and people can’t film everything but it’s not as bad as you think.”

Australia has been rocking with you lately bro, any messages for people in Australia?

“Oh, yeah, I’d love to get out there! You have been rocking you know, one of the first international cities that was outside of the UK that’s been rocking with me from early, I remember looking at my Spotify numbers, and Sydney was like above at least 15 towns or like areas in the UK! So there’s somewhere that I’m 100% keen to sort out, we’re looking at Australian tours and all sorts so that can definitely happen!”

You’re familiar with any Australian Hip Hop Australian scene which has been going pretty global in the last 24 months?

“Somebody that I want to work with is ChillinIt. We’ll definitely get it in. There was some of that was gonna happen on flowers but ended up not working out, but 100% that will definitely happen.”

Thank you so much for your time today bro. Congrats on everything you’re doing and know Australia’s rocking with you bro and when you come out we’ll link up.

“Yeah, appreciate you and the rest of Australia man. And you’ll get me on the show as well!”