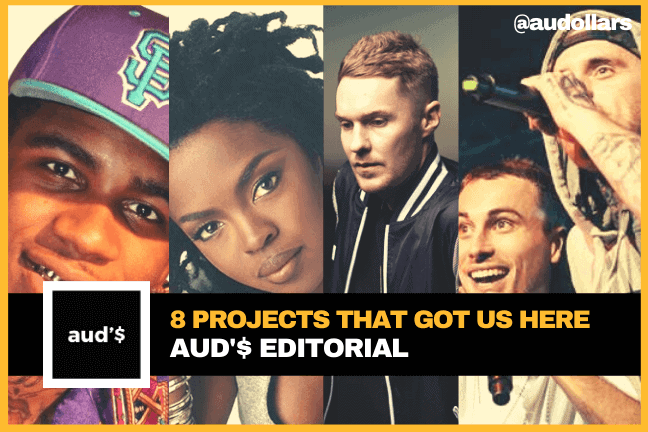 Australian Hip-Hop has evolved. That is a fact. Sonically, culturally, visually, it no longer looks like the “Aussie Hip-Hop” stereotype of the late 90s and early 2000s. Drill, Afrobeats, Autotune all occupy the top spaces on local charts and influential playlists that we never could have dreamed would exist. But that didn’t happen by accident. How did we get here? What were the pivotal music moments that helped shape the look and sound of urban culture in the AU today?

Thanks to the advances of the internet and the streaming services that came with it, the new wave of rappers in Australia have had the ability to explore more music than those that came before them. To consume, investigate and dissect the art of their predecessors.

These 8 records we’ve compiled have undeniably helped shape either the sound of particular artists, or had a more far-reaching impact on rap culture in Australia and millennials / Gen-Z abroad. It’s not a complete list. But it’s a good start. We’ve done the homework, so you don’t have to! Suss this list, debate what we missed, and let us know your thoughts on how far the scene down under has evolved.

Pez and 360 – The Forthwrite Mixtape

Whatever you think of Pez and 360, there was a certain time period where everything they touched turn to punchline gold. Forthwrite is one of my favourite Aussie hip-hop groups of all time, and while they only officially released the one mixtape together, they’ve been appearing on each other’s tracks ever since. ‘The Forthwrite Mixtape’ is some of the most natural-sounding, unhinged rap to come out of Australia, period – there’s songs about how much Pez loves dry-humping, how lazy Pez and Seth Sentry are, and how many people Pez and 360 know.

Is it dated? Undoubtedly. It’s also an album that captures 3 of Australia’s most prolific rappers at their peak. More recently, 360 has championed Aussie grime artists like Alex Jones (formerly Dr Flea), so his influence on the scene is still felt – even if his output has slowed.

Watching Yung Lean go from a shy, Swedish rapper who talked about Pokémon, to someone who’s continually one step ahead of the current wave has been interesting – but it all begun with a mixtape he made in his school’s computer lab. ‘Unknown Death 2002’ features sounds that still sound as fresh today as they did when it dropped – and that’s fortunate, given they’re still being referenced.

More recently, Yung Lean featured on Frank Ocean’s ‘Blonde’, which, given this first mixtape was originally dismissed as a meme, proves his growth as an artist. All you need to do to see Lean’s influence on the current Aussie sound is search Yung Lean on triple j unearthed – you won’t be able to get through all the up-and-comers that have listed him as an influence, even while in self-isolation.

Speaking about the album, Sampa The Great, one of Australia’s best rappers right now says, “I listen to everything from Lauryn Hill. She reminds me that I have a PURPOSE. She’s so influential it’s quite hard to describe in detail. Singer, Songwriter and Poet, same as myself. I see attributes of myself in her.  One of the biggest musical influences I have ever had.”  If that’s not enough to get you to check it out, then what will?

It’s not hard to draw a line between Kerser and ChillinIT, but for whatever reason, Kerser was never accepted like those that have come after him. Kerser’s career has been built off consistent releases and touring, and while you might not think you know a Kerser fan, you definitely do. 2011’s ‘The Nebulizer’ is a lot of what kicked off Kerser’s success, and the formula hasn’t changed much – but then again, when you’re the sickest, why would it need to? As ChillinIT puts it, Kerser “was the first us.”

There’s no doubting that Azealia Banks’ music continues to have a strong influence on the sounds of today – despite her antics on social media. Her ‘Fantasea’ mixtape was a glimpse into the future, weaving elements from both dance and hip-hop – and giving the world ‘212’, one of the most exciting rap songs ever made.

Banks has influenced the likes of SOPHIYA and Tkay Maidza, with the latter discovering her upon a music teacher’s recommendation – and that meshing of dance and hip-hop sounds continues to be a prevalent theme, even in 2020. She provided the blueprint for a new style of rap, and the new generation is taking the torch and running with it.

ONEFOUR, partly responsible for kicking off Australian drill, cite one major influence on their music above all else – Harlem Spartans. Often referencing them in their lyrics, as well as shouting them out in interviews, it’s not hard to see the connection between the Kennington-based group and ONEFOUR, with both talking about their experiences growing up – Harlem Spartans in London, and ONEFOUR in Western Sydney.

Harlem Spartans have a prolific discography already – so starting with the first mixtape in their The Mixtape series will help you get to grips with who’s in the group, as well as their sound. ONEFOUR aren’t the only big artist that’s a fan, either, with Drake publicly saying that he’s a fan of the group. RIP Splash Addict and RIP Bis.

You might know the name Drapht from the singles ‘Jimmy Recard’ and ‘Rapunzel’, but it’s not just his hits that go hard. His third album, 2008’s ‘Brothers Grimm’ features contributions from a who’s who of Aussie hip-hop in the 2000s – Dazastah, M-Phazes (who continues to go from strength to strength), Trials, Ciecmate and Plutonic Lab – and would influence the next few years of hip-hop in Australia, as well as help launch M-Phazes’ career, who’d go on to produce for some of the biggest musicians in the world.

Drapht took a break from music following his 2011 album ‘The Life Of Riley’, before returning in the latter part of last decade. Speaking to Howls and Echoes in a 2016 interview, he says hip-hop in Australia is the best it’s ever been. “I feel like this is the healthiest that genre has been since it began. People have this platform to be themselves regardless of what’s trending and what’s a fad and what not,” shouting out the likes of Remi, B Wise, Briggs and Trials. That’s what he intended to bring to the table – and on ‘Brothers Grimm’, he brought it in spades.

Lil B is a joke, or one of the most influential rappers of all time, depending on your viewpoint. While it’s easy to dismiss him as a troll (and a creep, given his search for feet pictures on Twitter), there’s no doubt that Lil B changed what it meant to be a rapper, and gave many of the new wave confidence that we see even today allowing people to be themselves. Lil B continues to influence Australian rappers today, such as Baro, who has shouted him out in multiple interviews.

‘I’m Gay’ is an anti-capitalist ode to freestyling, with a stream of consciousness approach to lyrics that came at a time where rappers were trying to out-class each other with their multis and rhyme schemes – and Lil B flipped that all on its head.

Article by Ben Madden, tweet him at @benmaddentweets or check more of his writing at www.benmadden.net. ????