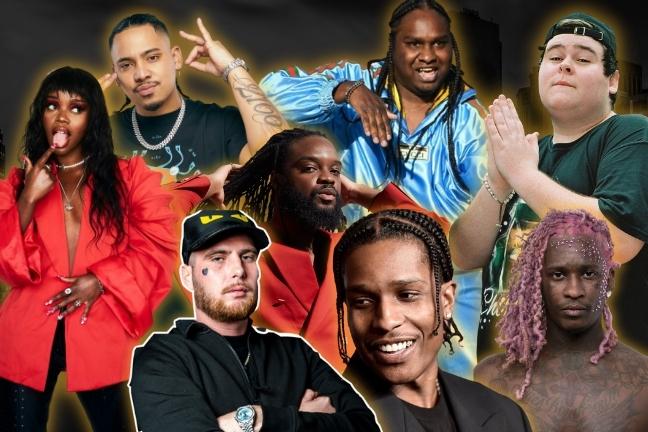 Wrapping up 10 of the best moments during the month of October in the AUD’$ and wider hip-hop universe. There’s never a list without controversy, so let the comment trolls begin…

10. ROLLING LOUD WRAP UP THEIR NY EVENT AND GEAR UP FOR CALIFORNIA

After the craziness over the last couple of years, festivals are finally back with Rolling Loud revealing their 2021 lineup. From December 10-12, the Nos Event Center will host some of the world’s biggest acts including headline acts Kid Cudi, J. Cole, and Future. Wiz Khalifa, The Kid Laroi, and Gucci Mane are among the number of performers joining Cudi for the opening day while the second day will feature performances from Gunna, Jack Harlow, Griselda, and many more. Helping Future to close the event out, the third day will see acts like Don Toliver, Coi Leray, and Lil Durk light the stage up. The New York leg just wrapped up at the end of the month, with crazy performances from Travis Scott, J. Cole, and Playboi Carti who memorably reunited with Lil Uzi Vert on stage. RL recently postponed their Portugal event until mid-2022 after it was initially planned to go ahead this past July. Having not returned to Australia since January 2019, there’s a chance we could see its return for 2022. The Australian scene has grown exponentially since then and it’d be interesting to see Australia’s acts paired up with some of hip-hop’s global superstars in an event that could draw unprecedented attention to the local hip-hop market.

Amidst the rollout for his debut album Gela, Baker Boy lit up Perth’s AFL grand final between the Western Bulldogs and Melbourne Demons. From the iconic Gucci outfit to the energetic choreography, Baker Boy has become the first Australian hip-hop act to perform at the AFL Grand Final pre-match. In all of his releases and live performances, the proud Yolngu artist lets his Indigenous heritage shine, and on one of the biggest stages in Australia, this was no different. His debut album dropped on October 15 and tells his story up to now with features from JessB, Jerome Farah, Lara Andallo, and more. Blending his love for Indigenous culture and music, Gela infuses Baker Boy’s love for Indigenous culture and his wide palette of dancehall, hip-hop, and pop. The young artist has already done so much for celebrating and representing Indigenous culture on a national level, even by adopting his native tongue in his rapping. Winning the Young Australian of the Year in 2019, Baker Boy’s work has already been nationally recognised but after his debut project release and performing at one of the biggest sporting events in the country, his trajectory is only destined for the clouds.

Following more mainstream adoption and attention toward cryptocurrencies this year, NFTs (non-fungible tokens) have become the next trend in the blockchain, offering exciting new revenue opportunities for artists and creators alike. If more artists begin to sell NFTs, they could very well disrupt the music industry and the larger art world. For those unfamiliar, an NFT is an unhackable 1/1 identifying code that’s attached to any digital work including music, art, videos and even concert tickets. While we’re yet to see a wide uptake of NFT’s within the AU, internationally the movement has been pioneered by names including Grimes, ASAP Rocky, Steve Aoki, and Eminem. NFTs are incredibly appealing to the music industry, providing a win-win opportunity for both creator and consumer by removing third-parties distribution platforms and creating a stronger artist-to-fan relationship in the process.

7. YOURBOYMARS BECOMES THE FIRST 6K ARTIST TO SIGN TO THE AREA

Yourboymars premieres ‘Cheating’, his first major-label single after signing to The Area Movement. Releasing under Warner Music Australia/ADA, the track marks the first time The Area has signed an artist outside of Sydney and for it to be someone from Perth marks a monumental moment in further connecting WA to the wider Australian scene. At just 20 years old and already becoming a staple for Perth, Yourboymars is just getting started. He has a great awareness of what’s popular and how to market himself but he does that while making sonically pleasing music with substance, stamping everything uniquely as his own. Going off his latest release, we’re all heavily anticipating his next moves, and hopefully a project on the horizon.

After going #1 in April with the YSL compilation album Slime Language 2, Young Thug dropped his highly anticipated second studio album Punk on October 15. It knocked Drake’s Certified Lover Boy off the #1 spot, selling 90k units in its first week. Promising to take a different approach to his usual sound, Thug delivered. He revealed more about himself in the intro ‘Die Slow’ than he had during his entire career up to this point. Incredibly, he was still able to display sides of him lyrically and sonically that we’ve never heard. Most of the album is beautiful and slow, with guitar riffs and amazing features from hip-hop royalty. He still delivered the signature Thugga sound throughout tracks like ‘Scoliosis’ and ‘Bubbly’ featuring Travis Scott and Drake, however, this album was more of a personal memoir. One of the most notable moments is the outro entitled ‘Day Before’ featuring Mac Miller which was recorded with Mac the day before his tragic passing, hence the title. He’s always demonstrated his continued willingness to be extremely honest and vulnerable, while still pushing extreme boundaries artistically. Young Thug is a true embodiment of a modern-day ‘Punk’ and continues to be both amazing and polarizing.

To newcomers, it may seem like Mason Dane has popped up out of nowhere but really, he’s been at it since his debut EP, Wake Up, in 2018. Dropping track after track, including Soundcloud only gems like his recent ‘Woman’ release featuring A.Girl, the Newcastle artist has matured his melodic style over the last few years. He’s even got his name sprinkled in production credits for artists throughout Australia like Brisbane’s Day1. However, this month has been particularly exciting for the young singer/producer after his latest track ‘DASH’ garnered the viral attention and love of rapper and auto-tune pioneer T-Pain. His praise from the OGs didn’t stop there though, with 360 co-signing Mason in his AUD’$ interview and teasing a future collaboration between the two on his Instagram. Joining us on Instagram live this month, Mason referred to his recent success as “the craziest couple of weeks of [his] life.” It’s not a hot take to crown Mason Dane as Australia’s next up, as it seems like the writing is well and truly on the wall.

In partnership with YouTube Music, the 2021 ARIA Awards announce their nominees ahead of the online ceremony on November 24. Genesis Owusu’s debut album Smiling With No Teeth has been nominated in 7 categories – including Album Of The Year, Best Artist, Best Independent Release, Best Australian Live Act, Best Cover Art, Best Hip-hop Release as well as the project’s producers Andrew Klippel and Dave Hammer being nominated for Producer of the Year. Masked Wolf received 5 nominations with ‘Astronaut In The Ocean’ and will be pitted against Youngn Lipz, The Kid Laroi, Genesis Owusu and B Wise for Best Hip-hop Release. While the ARIA’s still haven’t realised the illogicality of putting singles and projects in one category, 2021 marks the third year of their Best Soul/R&B Release with Tkay Maidza receiving her second nomination for the category and an additional placement in Best Video for ‘24k’. As no surprise, The Kid Laroi has also been nominated for Best Artist, Best Pop Release for ‘Stay’ featuring Justin Bieber and Song of the Year alongside Hooligan Hefs for ‘Send It!’. The ARIA Awards will be premiered on YouTube and available to stream free on 9Now.

3. HUSKII OPENS UP IN ZOKU CREATIVE’S ‘THE STORY’ SERIES

Wollongong artist Huskii discusses his “harsh upbringing, relationship with his family, prison life, music and more” in an exclusive interview with Zuko Creative. It’s no secret the 201 rapper has become one of the most revered artists in the country, building a cult following since his first project Barely Awake and Paranoid in 2016. The half-an-hour long video is the most thorough and thought-provoking Huskii interview yet, a credit to both his authentic transparency and Zuko’s meaningful new series. Previous episodes of The Story feature previous Bra Boys member Dean Clarke, Drug and Alcohol Multicultural Education Centre worker and non-active Hells Angels member, AJ Jadran, and gutter-rap icon Nter. With his upcoming album Antihero set to make shockwaves throughout the scene, Huskii opens up about the life stories that have inspired his music and provides cautionary commentary on substance addiction, assault and mental health. Released shortly after, Zuko Creative also enlisted Huskii for what we hope will be the first episode of an ongoing series titled ‘Tattoo Stories’.

On October 11, Four Corners aired their episode ‘Facing The Music: The Sony Music Scandal’, revealing the toxic workplace culture that former CEO Denis Handlin lead at Sony Music Australia. In June of this year, the company’s longest-serving employee was sacked and Sony began their investigation into the five decades of systemic bullying, discrimination, and sexual misconduct. Presented by reporter Grace Tobin, over 100 brave current and former staff from Sony Music Australia were interviewed for the 47-minute of ABC’s Four Corners. To summarise the biggest takeaways, Four Corners uncovered an internal video of Handlin dressed up as Hitler, multiple reports of sacking pregnant employees, and even more reports on his abusive misconduct. ‘Facing The Music: The Sony Music Scandal’ is a must-watch to understand the tyrannical reign that a major label CEO exercised over its employees and artists. Though the episode focuses on Denis Handlin and Sony, it brings a larger discussion of the embedded discrimination and abuse of power in the Australian and wider music industry.

With the help of Weave Youth & Community Services, Gomeroi storyteller Kobie Dee launched his new five-part podcast series ‘Know Role Models’. The 23-year-old artist has been sharing his experiences as a First Nations man through his music since his 2018 break-out single, ‘Right Now’. While the music hasn’t slowed down, recently dropping ‘Doobs’, the new choice of medium allows for honest and in-depth conversations with important figures in the Indigenous community. Inspired by his poignant 2020 track ‘Role Models’, the podcast debuted with episode one’s guest being the proud Andyamathanha/Narungga athlete and 2014 Australian of the Year, Adam Goodes. Weekly episodes since have featured program manager of Aboriginal Healing Program, Karlie Stewart, Yuin man and cross-fit athlete Eric Brown and Yuin Nation/Djaara Senior Criminologist, Sam Johnson. Speaking on the podcast, Kobie states “these conversations are about roles and our communities and how we can be better role models for our future generations.” ‘Know Role Models’ is an incredible space for connection, reflection and healing, and provides further context to the stories Kobie portrays in his music – more of which will be unveiled in his upcoming debut EP, Gratitude Over Pity.