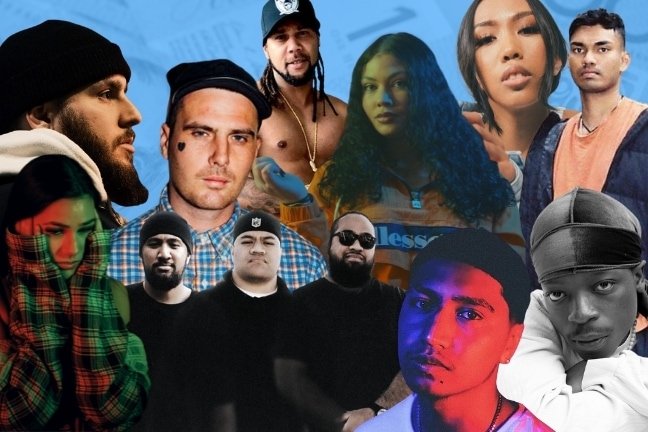 We hope this finds you well. Times are tough. Budgets are thinner. The landscape in the entertainment industry has shifted dramatically recently. You’re currently reading this while working from home; probably juggling screaming children, getting your head around the latest tik-tok trend, and frustrated with that one member of the team who never realises they’re on mute in the zoom until it’s too late.

In light of this, we’ve decided to make your day a little easier. We’ve done the hard work for you. So relax. Make a coffee. And rather than trawling through the latest additions to New Music Friday, scouring the Unearthed charts, or shooting DMs to the newest West Sydney driller featured on Instagram; check out this shortlist we’ve complied for your next team meeting. Here are 10 acts that somehow (as far as we know) haven’t been signed yet. All on their own grind. All in different lanes. All with massive upside.

Impress your boss. Run up that company credit card. And start reaching out to these talents before they’re snapped up.

Love from the team who started posting The Kid LAROI. back in 2016

This guy needs no introduction (hopefully). When it comes to the traditional, technical elements of rap; Huskii is hands down the best one doing it in anywhere the country. Add to that a comprehensive body of work dating back nearly a decade, arguably the loyalist fanbase in the country (they self-identify as a cult), and the respect of his peers – it’s a no brainer. The only questions are whether the chequebook is big enough, and whether he’s even interested. But with the right partnership and support, Huskii could be global within months and become the legacy face of Australian Hip-Hop.

She made her first NMF appearance last week so you’ve likely just come across her, but this Melbourne songstress has been on a tear in 2021. Be it solo drops, features, or collabs; R.em.edy doesn’t miss. Honest songwriting, chilling melodies, and a unique air of vulnerability – the sky is the limit for her. With a bit of creative budget and a PR push she’ll be a Gen Z sensation in no time.

He’s got the best full-length Australian hip-hop project of the year. Has featured on pretty much all the major DSP playlists. And is only 21 years of age. If there’s an act who can be developed, who already has an innate sonic maturity – it’s Brandon Stone. If you listen to one new album today, make it ‘Northside Lullaby‘. It’s innovative, stacked with clever collaborations, and maintains a consistent theme throughout. All funded out his own pocket.

Somehow amongst the Poly Rapper wave that has seen talents signing deals and getting put on left, right, and centre, STNDRD still haven’t been snapped up. The streaming numbers and organic groundswell of support speak for themselves. What’s most impressive though is the art direction, the top tier visuals, and the uniquely positive messaging coming from the trio. Island elements, feel-good vibes and angelic vocals. They’re in their own lane. If you don’t know ‘My Uso’ where have you even been?

I cried when I first a Jck song. He might be the best-untapped songwriter in the scene. A humble, independent talent from the nation’s capital, he reminds me of Youngn Lipz circa 2018/19 – heaps of talent, known amongst inside circles, and only a few puzzle pieces away from blowing up. His ability to translate his lived experience onto a record, without being too explicit, and while tapping into a niche emotional range is beyond his years. Plus the dude’s got a voice. The song was ‘Starz’ btw.

Clariyah Bo$$ already has a following most major label acts dream of. You only need to see the endless stream of comments on any IG live or Youtube drop to know that her base of ‘Rydaz’ is 100% organic. If drill is the wave being chased right now, then this Melbourne enigma is riding firmly atop of it on latest drop ‘Massacre’. A catalogue dating back years, across all sub-genres from boom-bap to R&B, and a quarter of a million YT subscribers. You do the math.

One of the shortfalls of the westernised mind state of Australians is that we’re continually looking at what’s exportable to the UK and America, while potentially missing a goldmine on our own doorstep. Lakshane is a formidable R&B talent in his own right, with national radio play and editorial DSP support under his belt. What makes him uniquely attractive though is the Sri Lankan born artist’s appeal to the over a billion people in South Asia. He’s sold-out shows both in Aus and in SL, has topped charts over there, and collaborated with some of the biggest names in the region. You only need to look at fellow Melbourne R&B export RINI to know it’s a winning formula.

It’s criminal that the name Lil Mase isn’t regularly covered in Aus music media and played on radio. One of the most distinctive voices and cadences in the scene, it’s a testament to his hustle that he’s achieved the online support he has without the backing of any machine. The proud First Nations emcee sounds like he could be at home on Death Row records in the 90s such is his nostalgic presence and confidence on the mic. The culture deserves a fully funded Lil Mase project.

This dude is Australia’s answer to Roddy Ricch. In an alternate universe ‘Over Sex’ got the pick-up it deserved across major DSP playlists, went viral on Tik-Tok, and Baby Prince is on the line-up for whenever the next Rolling Loud festival is. Prince’s autotuned vocal runs are things of wonder. His ability to find a pocket and just sit there has you deep in your feels wanting to text your ex. And he’s still young AF. Press play on this guy. And then hit repeat.

Surely this one is just a matter of time. Another Melbourne talent who has worked hard to craft an independent base which is the envy of those with budgets, Olivia Escuyos is destined for greatness. We’re spoilt for female R&B talent in Australia, however, Olivia has all the attributes to stand out from the crowd. The visuals are on point. The voice is spine-tingling. The potential is limitless. She’d be an asset to any label roster.