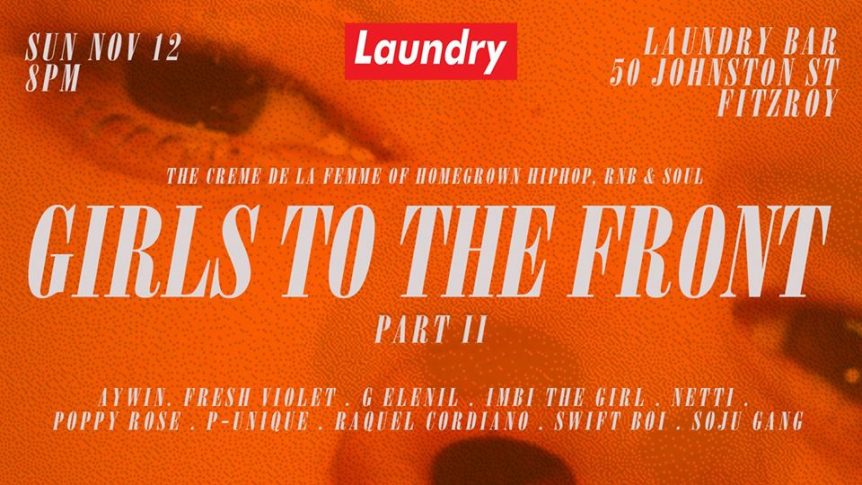 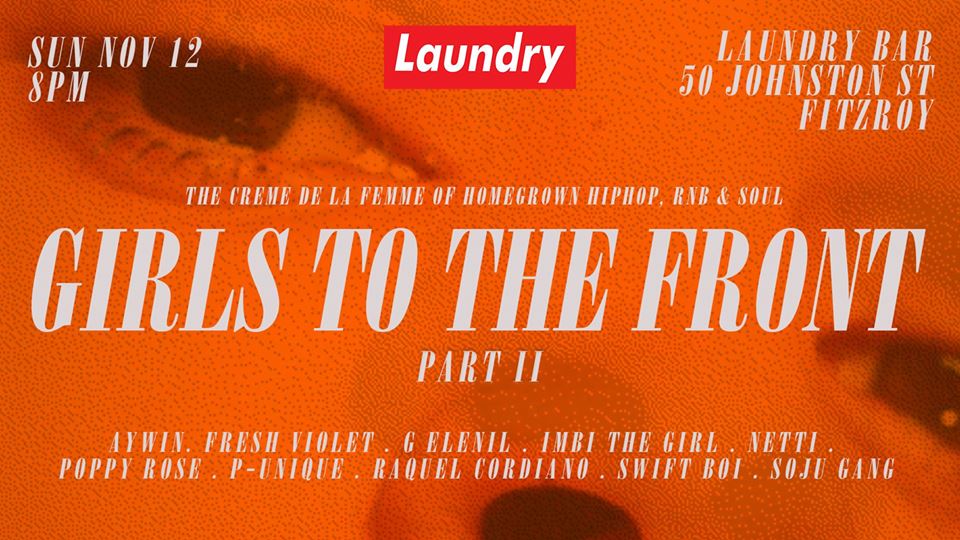 Tomorrow (Sunday, Nov 12) Girls To The Front 2 is happening fr @ Laundry Bar, Melbourne. Hosted by Melbournes own Poppy Rose and featuring both local and interstate acts, this is one regal lineup of nuttin’ but queens that you don’t want to miss.

Here they are, in order of appearance 💰

8:00PM – SojuGang (left) (MLB)
No stranger to Melbourne’s nightlife – Soju Gang is hard to miss with her throwback threads an infectious energy. She has become synonymous with a good night out, with a musical style that is inspired in 80’s/90’s
hip hop, RbB and everything party.

8:30PM – Raquel Cordiano
Local talent Raquel Cordiano has always been immersed in music – an upbringing that is a testament to her unique style. Venturing to Los Angeles in 2016, she furthered her passion of RnB, soul and hip hop – returning to Australia with a diverse musical style and providing skilled performances for her fans.

9:00PM – SwiftBoi
Making music from a young age, Swift Boi has embedded herself is an artist not to be reckoned with in multiple music scenes. The Melbourne based artist is currently working of her debut hip hop album titled ‘HONEY TRAP’. Swift Boi swings between freestyling and writing; since starting to freestyle in October – she proclaims that she will battle every MC she can find.

9:30PM – Fresh Violet
A cult favourite within the underground hip hop scene – the Melbournian rapper and producer Fresh Violet provides a combination of talent and compelling stage presence to audiences alike. Fresh Violet has released her singles from her first studio album ’50 SHADES OF VIOLET’ – and since has been frequenting venues across Australia offering a mix of energetic shows.

10:00PM – P-UniQue Music
Melbourne’s own, P-UniQue is a girl whose aim is to change the game for females in modern rap and share her love for music with others. P-UniQue has played events such as Momentum Showcase, and is predicted to only get bigger over the next few years.

10:30PM – Poppy Rose (MLB)
Providing a fresh twist on the Melbourne music scene; the young and ambitious Poppy Rose embodies a style of alternative hip hop leading the way for other female artists within the industry. Keep an eye out for this girl, as she continues to make serious impact within the scene.

11:00PM – imbi the girl (SYD)
Representing Sydney, IMBI THE GIRL is making serious waves within the Australian HIP HOP scene — receiving an overwhelmingly positive response to her debut single ‘ACIDIC’ – to follow this record up with a
sophomore single titled ‘VIP’ which premiered on Triple J. At 20 YEARS old – IMBI continues to amass countless fans and establish an honoured reputation within the industry.

11:30PM – G Elenil (BNE)
Brisbane’s own G ELINIL is a multi-dimensional artist – with a style is incredibly versatile ranging from dark/mosh pit bangers, to catchy anthems. G’s explosive energy and range of skills from production, to stage presence, has established a reputation among well-recognised and honoured artist within the scene of hip hop and RnB.

12:00AM – Aywin (BNE)
Not too much is known about Brisbane rapper Aywin Manyoul – publishing her latest track ‘FINESSE’ that
has been been dubbed by Complex Music as an ‘undiscovered diamond’. Her style of flow and delivery of sound reminiscent of some of New York’s finest in Lil’ Kim and Remy Ma.

12:30AM – Netti (MLB)
Hailing from the depths of Hellburn’s northside; NETTI is the musical result of if your favourite metal band had affairs with your favourite hip hop artist… her set nothing less than an enigmatic experience, NETTI is known to give 110%.

1:00AM – Soju Gang (MLB)
Self-dubbed ‘BURN CITY’S MESSIEST’, 1AM see’s Soju Gang re-welcomed to the to the stage to wrap it all up.

If you’re in Melbourne tomorrow, there really isn’t any other place you want to be. AUD’$ will be there covering the event and chatting to some artists, keep it locked & come support your qweens, 50 Johnston Street, Fitzroy, kicking off 8PM 👑💰.