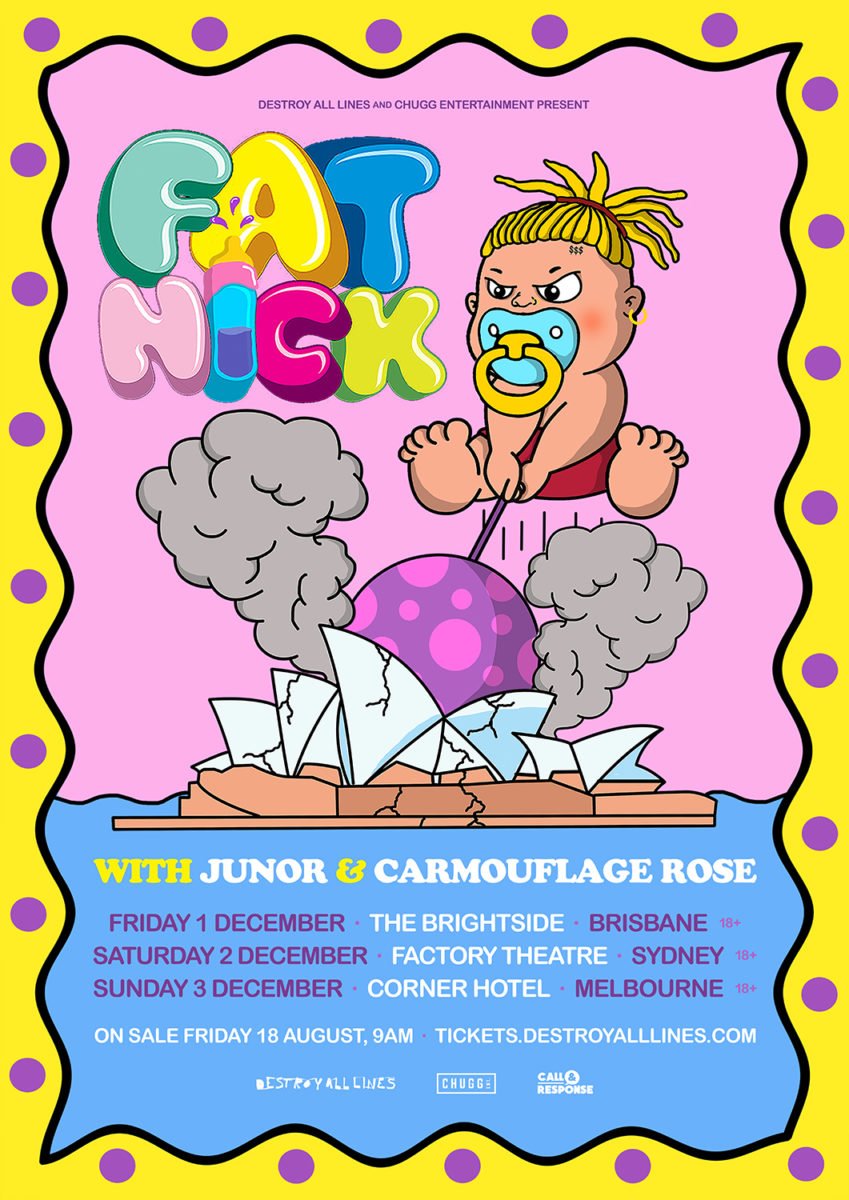 Destroy All Lines and Chugg Entertainment have announced Fat Nick’s debut Australian tour! AUD’$ could not be more excited to share the details with you, because pulling up to support all three shows are none other than Juñor & Carmouflage Rose, repping Melbourne and BNE.

The 22 year old Peruvian/Greek, Miami based Fat Nick boasts a trove of singles and projects, including ‘Fat Camp‘ – 2015, ‘When the Lean Runs Out‘ – 2016 and ‘Drop Out Of School’ – a 2017 project in in collaboration with Pouya. The ‘Buffet Boy’s‘ collective Fat Nick is a part of begun with childhood friend and rapper Pouya, and dates back to when they were 12 years old. It has now grown but stayed exclusive still, consisting of only Pouya, Fat Nick, Germ and rapper/producer Mikey The Magician. (If you want a laugh, check out Pouya and Fat Nick breaking down ‘Middle of The Mall‘ with Genius: HERE).

With a backlog that all add up to a huuuuuge 40+ million streams on Soundcloud alone, that speaks volumes of his cult following, he’s the baby faced baller that knows you can be ‘about that life’, and still be a decent human being at the same time. Not only is mans spreading a wave of big energy, codeine inspired, story telling and genre transcendent raps but he also spreads messages of love to the youth, and is constantly reinforcing his position in solidarity with the outcasts.

Having just released his new single ‘Late Nights’ (which was just added to Triple J rotation) Carmouflage Rose, the underdog earmarked as one of the top acts to watch in 2017, will be starting the night with first set. Followed by Juñor who just wrapped up DJing with Ivan Ooze for Peking Duk’s ‘Clowntown Tour’ – as well as following up with his own east-coast ‘First Class’ tour with Kwame in support of his latest Mann/Nate Fox collab ‘Top Flight‘, no doubt Juñor is going to be zoning with another one of his high energy, trippy spectacles of a set & that all or nothing attitude.

Tickets go on-sale HERE on Friday August 18th @ 9am, so set those alarms now and be sure you don’t miss dis ?