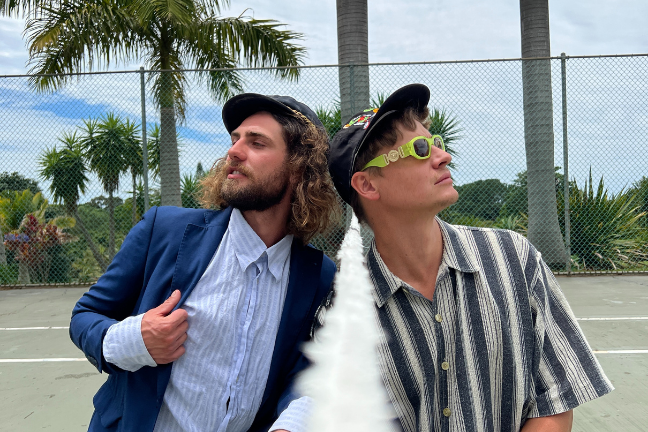 Versace Boys, the musical duo of Will Henderson and Coast & Ocean, premiere visuals to their debut single ‘Damage Control’.

The Byron Bay-based artists blend their smooth vocals over the happy jazz and trap-infused beat, leaning on influences like Mac Miller and Still Woozy. Unintentionally coinciding with the biggest flooding the Northern Rivers has ever seen, the Miggy-produced single was recorded three weeks prior.

Shot by Jesse Thorne, the music video was filmed on Henderson’s front driveway in Mullumbimby and shows the heartbreaking reality of the flood’s devastation on the Northern Rivers region. Atop piles of plasterboard ripped from his house, Will Henderson and Coast & Ocean provide some light-hearted and soulful music in times of hardship for a lot of communities along Australia’s east coast.

“It’s been a massive month of cleaning for the community but we made some lemonade out of the lemons with our debut film clip.”

The two initially met in Berlin two years ago, and eventually started recording in lockdown last year with Sydney-based producer Miggy. Having shared the local stage alongside the likes of Flight Facilities and Genesis Owusu, Versace Boys will be at the three-day Rabbits Eat Lettuce festival over the Easter Weekend to perform the lead single from their upcoming first EP.