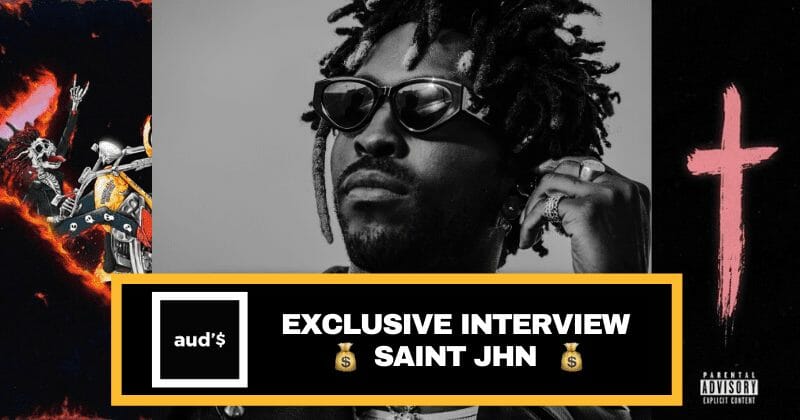 SAINT JHN is one of those artists that you listen to, get instantly hooked, and then spend every other minute of your life telling your friends to check out. At least that’s been me for the past couple of years. I stumbled upon “I Heard You Got Too Litt Last Night” the week it dropped. I hit the repeat button and instantly went down the rabbit hole trying to learn as much about this guy who sounded nothing like I’d heard before. Not only were the beats banging, and his vocal cadence rich and unique, but the storytelling and lyrical content was on another level. It was little surprise to find out he had previously written for Rihanna and Hoodie Allen before deciding to go out on his own.

A month later Collection One dropped. A project which would accompany me on plane flights, in the car, and definitely in the bedroom. Soulful, polished and sexy as hell, it became my most listened to project of 2018 and I waited on his star to rise. I didn’t have to wait long. Just over a year later and SAINT JHN is a household name having worked with Lenny Kravitz, Lil Baby, Meek Mill and most notably for non-rap fans, with Beyonce, Wizkid and Blue Ivy Carter on “Brown Eyed Girl” one of the most beautiful cuts from the recent The Lion King reboot soundtrack.

The new album Ghetto Lenny’s Love Songs is a true coming of age for the Guyana-born, Brooklyn based artist. Rather than a collection of top tier tracks, Ghetto Lenny is more thematic than its predecessor; intimately weaving narratives of sex, religion and the current road to legendary status. Sonically grand and lyrically vulnerable it truly is one of the most complete projects of 2019.

I was lucky enough to catch up with SAINT JHN for a phone chat following the announcement of his debut Australian tour. We laughed, talked some shit and somehow managed to get deep into talking about his culture, his upbringing and how that translates into the enigmatic artist you see today. Read the full conversation below.

Hi Saint, great to talk to you man, thanks for taking the time today…

Nice to talk to you bro. For sure, it’s exciting!

Definitely! Congratulations on the album, congratulations on the tour announce. You’re gonna be out here at the end of summer which has just kicked off here. It’s hot. It’s sweaty. It’s gonna get wild. I know you like it like that….what are your expectations of Australia?

Lots of bikinis. I don’t care if I’m doing indoor or outdoor shows. I just wanna see bikinis. That’s all you wear in Australia yeah? Even if it’s night time?

24/7. I’m in one right now as we’re doing this interview actually!

That’s exactly what I thought! I didn’t want to picture it, I wasn’t sure what it would look like. But I figured, this guy on the phone is in a bikini for sure!

Hahaha, well if you want we can link up the video chat for next time yeah?

Oh no no no. Please man. No we good haha…

Musically bro. And lyrically. You talk a lot about where you’ve come from and where you’re going to. A guy who 18 months ago was referring to himself as ‘Ghetto Lenny’ now has a huge track out with Lenny Kravitz! Tell me how that comes about man, and what that means to you?

I think I got a little bit of luck. And a lot of hard work. And somewhere in the middle you create a bit of magic. I dunno how it really happened, but it happened in Paris. Things that never happen; happen in Paris. Not that I think Paris is necessarily a magical place. But magic only happens where magic exists. Boom! Sounds sexy don’t it?

Anyway so we met outside of a Chrome Hearts party and it just went from there. We hit it off and became fast friends. I respected his music, I respected his legend, and anything he’s ever done on the planet. It’s Lenny Kravitz fam! You gotta put that into context. He was kind enough to actually listen to the music when it was sent to him. He liked it. He wanted to collaborate. He was open to it. And I wrote my name on the wall of history as a lit n*gga forever and ever and ever. And that’s the whole story…

Mmm facts. And so when does the Michael Bolton collaboration come out then?

Ohhhhhh hahaha. The Michael Bolt… wait… you know what? Fuck it. Michael Bolton is on the list now. Guys, please take notes (*speaking to his label team listening in on the call*)… Michael Bolton has to happen on my next project.

I think it would be incredible. Haha shit would probably be ignorant.

Lock it in then. It’s happening. We’ve cooked it. You heard it here first!

Man I wanna talk briefly about your culture and heritage. I think through your music I hear two different elements. I hear that street element coming through from your Brooklyn experience. And then I hear these beautiful melodies and rhythms that potentially comes from your Guyanese heritage. There’s a lot of similar sort of music being made by people in a Third Culture type space. I spoke with Bas from Queens recently on his experience and I’d love to hear you talk on that. How do your cultural elements come together to make the music and the stories that you’re telling?

I think you said it…. maybe even better that I could. You have the benefit of perspective. Remember I’m inside of this transforming machine and I’m just driving it. It’s the only machine I’ve ever had. But you’ve seen a feature of me that I’ve never even had the ability to see myself. But it’s clear as day; I’m Guyanese AND I’m from Brooklyn. I grew up in both countries. I listen to rap. I listen to dancehall. I didn’t know that people could see it and notice it. I mean when I meet people and they ask me where I’m from; I ask them WHY they asked me that. They heard something behind my voice, something behind the timbre or cadence in my voice that told them there was more… something else. I don’t know if that sounds fancy but they heard something that I couldn’t hear. And now you’re seeing it and putting it into words for people to read…

I didn’t have an option. I was just tryina find a marriage between what I knew and what I wanted to know. That’s it. That’s my music.

Yeah that intersection. Of you just living your life and telling your story. I guess, not only culturally is there a massive intersection, but between sex and religion. Obviously. Is it true your son of a Pastor? Your Dad?

My mom. My mom is a minister.

Ah okay. Your mom. How does that intersection happen? I know myself. I grew up in a very Christian family and when I started talking about sex it didn’t go down too well haha. How’s that experience been for you?

Well for me I didn’t have to talk about it as it beat me home. Because my mom follows me on Instagram hahaha. I grew up super Christian. I grew up going to church. Honestly, I wouldn’t say actually ’super Christian’ but I grew up in a Christian household going to Christian churches. My real name is Saint Jhn so my mom believed at some point or another in Catholicism. I’m tryina find a real sophisticated way to say that this lady thought it was cool to make ALL her kids go to ALL the churches ALL the time. For a long time. That’s what happened.

Hahahaha. I get the picture.

Yeh n I wasn’t one of those kids who would just listen to the echoes coming down the hall. I decided for myself what I believed. Like I don’t care how many churches you put me into; Baptist, Pentecostal, Methodist, 7th Day Adventist. Then I became Brahmin and we were meditating. I don’t care how many times you did it. Or how many different languages you do it in. I’mma form my own opinions. So I became Agnostic. I started to read and translate. And I thought fuck it! These puzzle pieces make sense, and this third one doesn’t. So I became Agnostic. And you hear that in the music. You hear me wrestling with a belief system. And a practice. And trying to find this middle ground.

Absolutely can hear that!

I don’t know where it’s supposed to go. I just know what I believe. I don’t know what everyone else is supposed to believe. But I’m just having a good time talkin. I got news! I’m sharing perspective! I mean think about it; if the world was a group of people that I met. With this phone that I got in my hand. And the service that I paid from Sprint. I’m just updating my friends in a room, which is the globe, on some new information. Right now it’s Christian Sex Club.

Hahahahahaha. You know what? When you come to my house you’ll see. It’s simplified for you. You’ll see a massive portrait. It’s beautiful. Black and white format. It’s hard to miss…

Aiight. Well I might have to take you up on that invite man and come Stateside.

Bet man. That’s it for today bro. I’ll let you keep moving and look forward to catching up when you’re in Australia.

Alright. So do I brother. Thanks so much for your time.

Ghetto Lenny’s Love Songs is out now on Spotify, Apple Music and more. You can catch SAINT JHN live in Australia next March. Details below. Tickets available now via Live Nation.