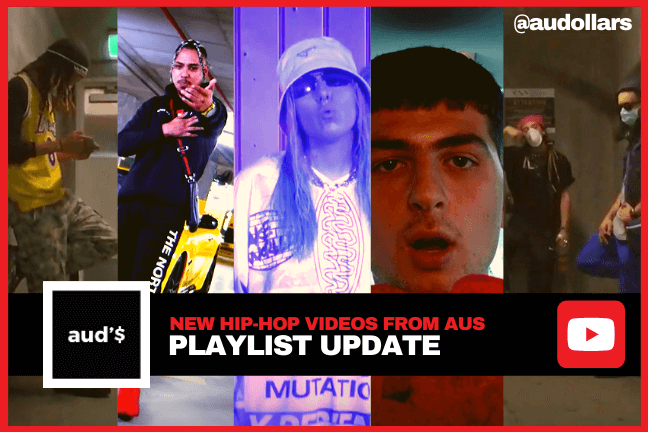 As we’re all locked up in our houses glued to devices and screens, we’re fortunate that the talent out the AU is still dropping fire clips. We’ve rounded up some of the best that have been released lately in our Youtube playlist that are worth you checking out. Dif styles. Dif areas. Same cash. Be sure to follow us here????

One of the most engaging and hilarious music vids we’ve seen in a minute from Melbourne’s DOLORRES. Not only is the concept and the execution on point, but the track bangs! Run it back and show your mates. You won’t be disappointed.

This track has been everywhere the last few weeks and today we finally get this clip! As if SOPHIYA didn’t go hard enough on the audio, the bright dynamic crew cut brings a whole new life to this joint which bout to start running up some numbers. Vibe.

RG WINGS – ALL MY BRUDDA$

A mainstay of the Sydney rap scene, RG WINGS has shot and cut this one despite isolation restrictions and hits home with the bars. Has us longing for this situation to end and link-up with the squad ASAP.

Possibly the brightest name emerging out of the AU at the moment, everything YOUNGN LIPZtouches turns to gold and this is no exception. This one already starting a wave on TikTok too. Global.

Another isolation inspired clip, this one from a Melbourne CBD hotel. JUNOR links up with LA’s WILLY BEAMIIIN for a punchline heavy boom-bap cut and some pristine balcony visuals.

The AUS drill wave shows no signs of slowing down, with Ipswich crew TH4 W3ST dropping this massive joint outta the 4K. Already stirring some heat online with a couple of the lyrics being controversial towards other AUS acts. Check & decide for yourself. Joint goes regardless tho.

Shot in NZ before returning home to AUS for a headline tour. Unfortunately the wind was taken out of COAST & OCEAN‘s tour sails only a few shows in but the energy, fun and fan love in this clip has us longing for a Coasty return to the stage.