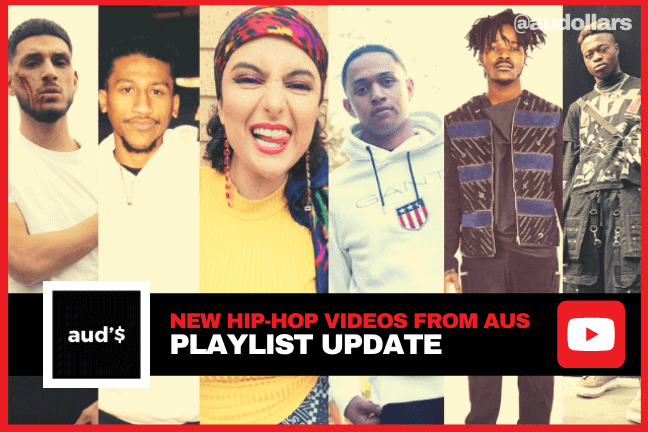 MASSIVE week of drops across the AU. We’ve rounded up some of the best VIDEOS that have been released lately in our Youtube playlist  – ALL worth you checking out. Be sure to follow us here????

Heater straight out the gate. Two cats from the North North of Melbourne putting a total new spin on the emergence of drill we’re seeing out the AU lately. Melody Napoleon delivers hauntingly beautiful vocals to compliment young king Danii Jordan’s bars. Put this on repeat.

A sharp turn from Middle East / West Sydney duo Brothers. Deeply personal raps, a change of pace from the usual party / electro / drill influences of these guys, but this shows a whole other side of artistry we were previously unaware of. Probably the best raps we’ve heard and a track that shows they’re here to stay.

Somewhere between Gunna, Young Nudy and Playboi Carti, this guy is one you nearly saw in the AUD’$ vault but will have to wait a little longer. PETIT rides a beat with effortless finesse and latest video Wave is no exception. Watch closely. He up soon.

The latest cut off Nardean’s new EP ‘The New Era’ once again sees the NSW poet / songwriter in a playful, nostalgic lane. With some personal throwback camcorder footage thrown in for good measure, this one will sit perfectly for her fans old and new.

RONIN – ALL GIRLS ARE THE SAME

While previously when we’ve brought you tracks from RONIN they’ve been in-your-face, brash Metal / Trap releases, this time he goes 180 in the other direction. Uploaded to Viral Hip-Hop / Anime channel TRASH, this one is a low-fi romance joint doing serious numbers early.

The Polynesian wave is dominating down under and Blueboy is a name that needs to fast be added to your radar. The guy has vulnerable Roddy Ricch like melodies which hit right in the feels due to some deeply personal content. Potentially the most impressive debut since Youngn Lipz did something similar in 2019. We all know how quick that happened too.