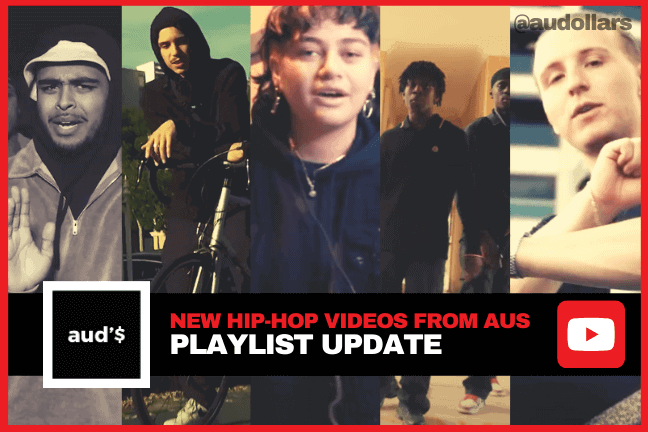 Dif styles. Dif areas. Same cash. We’ve rounded up some of the best VIDEOS that have been released from the AU lately in our Youtube playlist  – ALL worth you checking out. Be sure to follow us here????

This joint slaps. OGM are the powerhouse collective out of Sydney who are making waves in all corners of the globe. Local Scene legend BADBOYRIRI directs a killer bando clip for Kado Woods & Kingston to shine in. Only a matter of time before these guys drops hit the trending section.

He’s baaaaack! After a 12 months hiatus London born Z. LEWIS drops a fire new freestyle in his Catchin Z’s series which shows his pen is still at the top of the game in the AU. Picked up some decent looks at home and abroad in only a few days signalling a big year for Z. We want more.

Raps, raps, and more raps. Three of Melbourne’s finest link-up to flex lyrical over a banging DUAN beat. Impossible to catch everything they say in only one watch so you hit that repeat button and try keep up.

Discovered via AUD’$ GOT TALENT on IG. TEBE is a young artist out of NSW who has some nice, feel-good melodies happening. He’s racking up streams on Spotify and  has just dropped the clip to his single Coming Up. Def worth a peep.

Brisbane collective SWISH MUSIC announced their signing to SONY Music with a repackaging of their breakout Showtime featuring verses from breakout label acts Nerve and Hoodzy. The first of many polished visuals we’re anticipating from the rising clique.