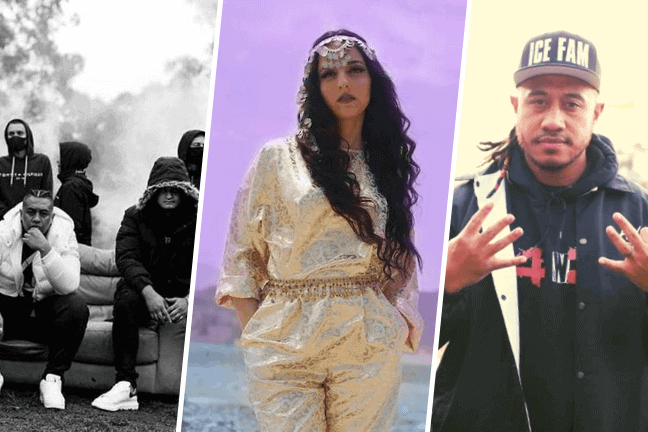 More power videos released from all across the country this week. Diverse styles, top quality production, and sharp raps. We’ve wrapped up some of the best for you below. Make sure to follow our Youtube playlist and be letting us know which clips you’re most into via our socials ????

ONEFOUR – HOME AND AWAY

“Yeah I grew up in Mounty that’s home of the brave, out here we’re at war with the cops like Brax but this ain’t Home and Away…”

Australia has been patiently waiting for ONEFOUR‘s first track from their hotly anticipated upcoming EP, and Home and Away delivers with a cinematic and sonic experience unlike anything previous. Brought to life through a combination of orchestral strings, a black and white music video and signature hard hitting drill elements, J-Emz and Spenny pay homage to their hometown of Mount Druitt in Western Sydney. It’s raw, honest and highlights the close bond of their community.

Brisbane local Lawd Lance has brought fellow 43 rapper Lisi and 78 rapper AmuThaMC together in a latin inspired drill track saturated with hard hitting, clever punchlines. The trio transition seamlessly between one another repeating the simple yeh infections ear-worm before delivering their respective verses. Together, Around Here is a collection of narratives that depict the hustle and hard work of some of Queensland’s finest.

“To leave behind a mark greater than the one we set forth upon today, that’s REAL…”

The Pursuit is a powerful spoken word piece delivered by R.E.A.L Music signees Junor, Z. Lewis & Droopo highlighting the hustle and struggle necessary in the pursuit of an artist’s endeavours of greatness. Brought together through beautifully vivid and intricate poetry, electrifying FunFilms video production and triumphant drone shots of Melbourne’s northern suburbs, the short film teases forthcoming releases from the label.

“I wanna see the light with no light switch, pretending you is nice you ain’t nice bitch…”

Persian/New Zealand rapper CHAII delivers a pop inspired bop off her debut mixtape EP that is guaranteed to get you moving. CHAII analyses the need to be true to oneself, accentuated by colourfully saturated music video of Los Angeles. With production from Frank Keys, CHAII bounces across the track and transitions seamlessly between English and Farsi. Although relatively new to the scene, the overall quality of her artistry makes it clear there’s big things ahead.

Coming through with explosive and ominous drill flows and bars, Six1‘s mature sound attracts not only the ears of Australian but UK listeners as well. Consisting of Australian drillers Black Napoleon, Numba9ine and L3V3l the group has secured an exclusive video release giant UK channel Pressplay Media evidence that Six1 are primed to be another powerful name on the rise in the booming drill scene down under.

“They know that I’m with it, straight to the top you know that’s why I hit it!”

Melbourne rapper AC-300 flows with presence across a dark melodic beat in his latest track Who You Wit. Although relatively new to the scene, AC’s deep husky voice, which reminiscent of the late Pop Smoke, sees the emerging African / Australian talent primed for a quick ascent via another strong TMC visual.