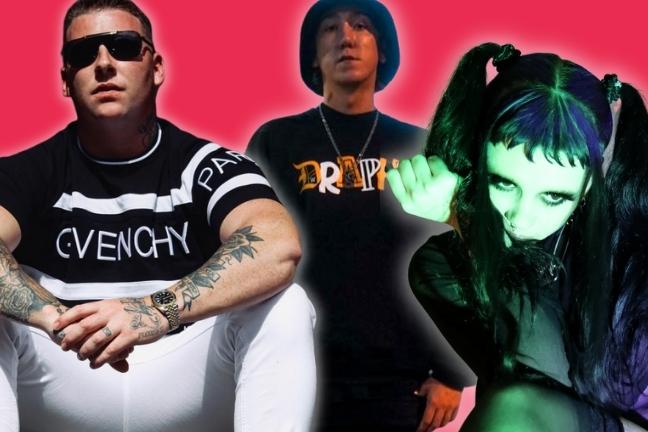 With a commanding presence and loud, alternative/trash aesthetic, Zheani has carved out a niche lane for herself amongst her contemporaries. The latest single ‘Napalm’ arrives alongside a Mik Shida-directed video, capturing the dark aura of a relationship gone wrong. Brash, powerful, and in-your-face, Zheani is never backward in coming forwards, her full range of emotions on display in the flashy visual. Having received praise from publications across the world, Zheani has successfully grabbed the attention of the underground/alt hip hop world and won’t be letting it go any time soon.

Infamous Oz Rap emcee Skrub returns with a brand new project ‘Gummo (The Mixtape)’ showcasing his lyrical dexterity which has earned him a loyal fanbase. The 4k artist has dropped an animated visual for ‘Soloman’ with scrambling cartoons under the creative lens of Tenth Dan Animation. Always energetic with his delivery, the lead single sets the tone for the remaining 9 songs on the project with Skrub’s cutthroat mic presence and Dan Bone‘s heavy-hitting drums sure to have his unique cadence exciting AU audiences.

In one of the most transparent songs of late, Perth MC Complete describes in detail his battle with alcoholism and the struggles of temptation and overcoming. A canvas of grey layered in wide-angle shots by Drop Shop Media portrays a mood of emptiness. No room for emotion or feeling, in this clip, Complete is merely existing. Complex lyricism and vivid storytelling are hallmarks of the WA emcee who once again grips listeners who journey with him through his chilling, painful story.

Melbourne veteran Flowz Dilione blesses fans with a long-awaited autobiographical journey on ‘Behind Bars’. Detailing his previous struggles with addiction, crime, and sobriety, Flowz pulls back the lid on the heavy guilt he has carried throughout his life and how redemption now has him feeling like a “new man”. In the 6-minute track, he barely takes a breath, effortlessly flowing over heavy snares with underground rap visual icons BodyBagMedia holding things down on the lens.

In arguably his best piece of work to date, Nooky delivers the hard-hitting track entitled ‘Run Dingo’, with help from iamsolo. Nooky expresses frustration as he opens up about being a proud Indigenous man experiencing discrimination and fearing that his daughter will inevitably endure the same thing. Iamsolo swiftly carries the emotive ambience of Nooky’s chilling verses into a gripping hook; one we expect to hear frequently throughout the year. Under the visual direction of Josh Lee (Sonder Films), ‘Run Dingo’ is a powerful, perspective shifting piece of art and cultural commentary.

In Blessed’s newest release entitled ‘No Changes’, he heartwarmingly yet unapologetically touches on themes of equality, harmonization and black excellence. Powerfully delivered, Blessed’s vocals are moving; offering a soft, gentle comfort for the oppressed, and hope for a better tomorrow. One of the most consistent workrates in the AU, Blessed has steadily been on an upward trajectory for several years, proving time again that he is an artist full of both talent and integrity – delivering positive, empowering messages via top tier artistry.