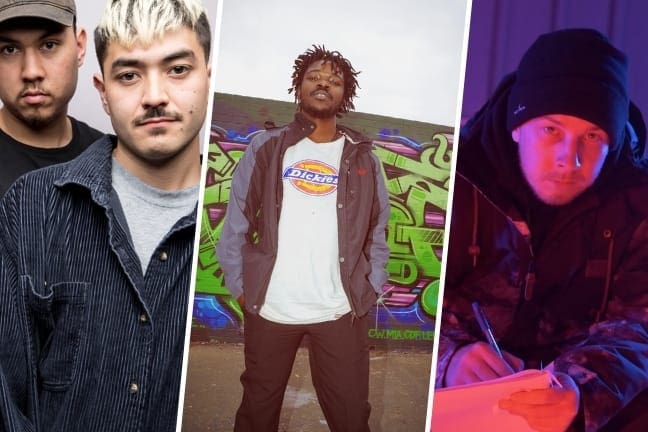 Melbourne’s Melody Napoleon glides across his new melodic drill hit. Directed by Vision Productions, ‘Gliding’ is a soft-spoken street tale from the North. In one of his most complete pieces of work, Napoleon’s level of production has evidently stepped up since bursting on the scene with ‘Problematic’ in 2020 with fellow northsider Danii Jordan. In just a short time, his unique style of melodic Drill places Melody him at the forefront of the genre’s sound and allows a track like ‘Gliding’ to be as laidback and amatory as it is casually braggadocious.

Inferno and Feeemo sound the sirens for their new UK and AU link up on ‘Keep It Moving’. Western Sydney emcee Inferno introduces the track with a slow and menacing delivery over the instrumentals alarms while all the way from Manchester Feeemo jumps on the track for a quick spray of fiery bars. Directed by Cerne Studios and Arad Visuals respectively, ‘Keep It Moving’ is proof that not even travel restrictions can stop a killer collaboration.

Sydney favourites Triple One drop visuals to their 2020 track, ‘Skinless Man’. Directed by Martin Guilfoyle and Aaron Bull, the music video finds the group sinking beers and making use of the green screen for their rap and surf rock infused record. The track features production from Billy Gunns and 18YEAROLDMAN, while Obi Ill Terrors, Marty Bugatti and Lil Dijon take care of the vocals. ‘Skinless Man’ was a distinct track from their Panic Force project, as it saw Triple One openly embrace their early influence and expand their sonics.

Biordi signee BALLY BOY comes through with another blend of R&B Trap on his new single, ‘Cops & Robbers’. In the Lowkee directed music video, the Western Sydney artist compares his life to a game of Cops and Robbers. Similar to his 2020 track, ‘All Out’, ‘Cops & Robbers’ flexes BALLY BOY’s ability to transition from charming R&B to hostile Trap rhymes. With the drop of his new music video, BALLY BOY has also announced his debut EP ‘LOC4L LUN4TIC’, dropping in April this year.

Perth’s Dekstah wishes farewell to past relationships, as he welcomes his soulful new track, ‘GOODBYE’. The track is the WA artists’ seventh release for the year and finds him rapping about the changing nature of his previous relationship. Waving goodbye over the soul sampled instrumental, Dekstah’s wordplay and cheeky hook are the standout qualities of his new track. While the Perth artist has been on a tear this year, ‘GOODBYE’ might be some of his best work.

Sydney’s Solochulo comes out firing on ‘Contagious’, his first release of 2021. In the Aaron Bull directed music video, Solochulo expresses through the infectious Trap track that he’s focused on nothing but his hustle. With an instrumental dominated by guitar licks, dancing hi-hats and punchy drums, ‘Contagious’ is a strong start to the artists’ year. The South Sudanese talent is crafting intelligent tracks destined to take him to the country’s top tier; as he continues to build allure with his autotuned vocals, it won’t be long till that takes place.