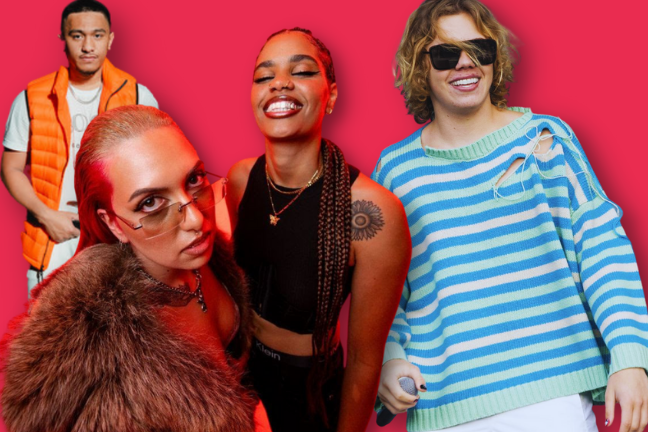 Gathering another half-dozen of the best releases from our New Hip-Hop Videos From Aus playlist; as always, highlighting the latest and best videos year-round from across the AU. Don’t miss out! Subscribe to our channel to be the first across the hottest new clips. Here are a few of our weekly favs but there are hundreds to watch in our Youtube playlist! Which video are you into this week? Slam the comments with who we missed…

The Kid Laroi fights his own battle of good and evil in his 2022 debut ‘Thousand Miles’. The Sydney-born artist has been soaring off the success of his first project F*CK LOVE 3+: OVER YOU and the mammoth hit ‘Stay’ featuring Justin Bieber. Produced by Louis Bell, who’s the man behind some of Post Malone’s biggest tracks, the melodic piano-led trap single was first previewed in early 2021. The ‘Thousand Miles’ music video is directed by Christian Breslauer and sees Laroi lean into the shoulder angel and devil archetype, with his devilish alter-ego violently causing more and more problems. The new single will feature on his upcoming debut studio album that he tweeted will be titled Kids Are Growing Up.

Gender-fluid artist Sophiya and NZ’s JessB channel ‘Kween Energy’ on their first release of the new year. Produced by JUJO, the bold boom-bap single is an anthem for all femme-identifying people “who can be bosses in their professional life and confident in their sexuality and personal life.” Since her debut Overdue EP in 2020, the Melbourne-based artist has remained relatively quiet aside from joining YNG Martyr on ‘They Say’ last year. Now making her return to the limelight with ‘Kween Energy’, the track is accompanied by colourful visuals directed by Josh Davis who captures the two rappers together.

Yeloboi Tommy tells his Western Sydney story in the latest release, ‘Long Story Short’. The Asian-Australian artist has gone from strength to strength in his sophomore year – debuting 2022 with ‘Heartbreak’, touring with Triple One and soon Mason Dane, as well as recently linking with Kapulet on ‘Riding’. In his most sincere single yet, YBT melodically reflects over the guitar-driven trap beat produced by his brother 99hurts – “Long story short I’m trynna keep it brief, said I ain’t no gangster I still keep it g.” The 21-year-old offers empowerment with his tale of comeuppance and pays homage to the ones he’s lost with flashes of photographs in the music video by Navsrevenge.

Proud Pakana Denni debuts the new year with her powerful anthem ‘Strongest Mob’ featuring Craig Everett. Produced by Lariken, he blends didgeridoo sounds into the high-energy hip-hop track as Denni and Craig pay homage to their Indigenous culture and condemn White Australia – “They wanna war don’t wanna talk about a massacre.” The music video filmed by Lachy Hamill is a full community affair with every one of old and young showing support, and Denni, Craig and many others in body paint. ‘Strongest Mob’ is the first release from her since the debut project Growing Pains and what a commanding return it is from Tassie’s leading lady.

Bally Boy offers another Western Sydney link up, this time with Hooligan Skinny on ‘Enough’s Enough’. Starring alongside each other in Lowkee’s Neverland movie, the Biordi Music signee puts his acting skills to the side for the no-nonsense tone of his latest single. Bally Boy opens with a signature flawless hook over Colcci’s drill production before Skinny delivers a savage guest verse, his second of the year following ‘The March’ with MONTELLEM. Accompanying Bally’s second release of 2022, following his recent collaboration with KAHUKX on ‘Forget You’, the track’s music video is directed by Navsrevenge and features appearances from Spanian, Hooligan Hefs and Hooks.

Dinje shares visuals to the remix of his 2021 single ‘WISH I KNEW’, now featuring Mason Dane. Balancing between hip-hop and pop sounds, the Perth artist’s remix of his most recent single from last year captures the uncertainty of whether the one you love feels the same. Produced by Mulak, Newcastle’s Mason Dane slots into the first verse before the Asian-Australian artist closes it out with a climactic hook and his very own verse. Directed by Joel Baker, Dinje is shot under the vibrant lights of an arcade while Dane performs on his own version of the original track’s cover art. Moving into a more pop dominated sound, Dinje has made the transition with ease on ‘WISH I KNEW’.