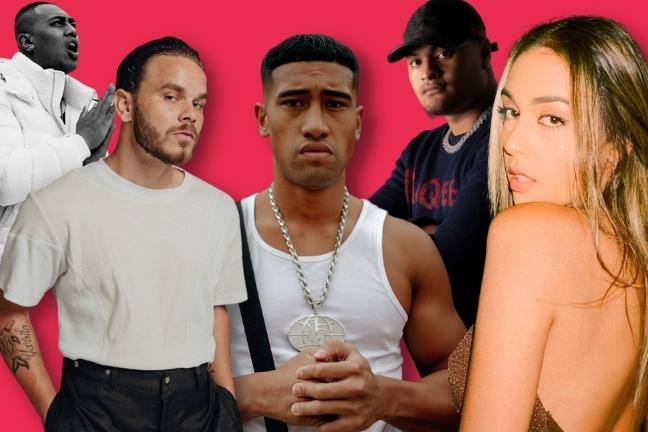 The first week of Q2 is here, along with a new bunch of visuals via our New Hip-Hop Videos From Aus playlist; as always, highlighting the latest and best videos year-round from across the AU. Don’t miss out! Subscribe to our channel to be the first across the hottest new clips. Here are a few of our weekly favs but there are hundreds to watch in our Youtube playlist! Which video are you into this week? Slam the comments with who we missed…

Lifted from his upcoming debut album A Colour Undone, Tasman Keith and Genesis Owusu talk their shit on ‘CHEQUE‘. As the project’s third single, the Gumbaynggirr artist carries the braggadocious persona he showed on ‘5FT FREESTYLE’ and enlists the six-time ARIA Award-winning Owusu to follow suit. The two unleash flex after flex in ridiculously impressive fashion over dynamic and fiery production by Kwame. In every department, ‘CHEQUE’ and its Zain Ayub-directed music video is a showcase of the very best in AU. A Colour Undone will release on July 8 with features from Jessica Mauboy, Thandi Phoenix, Phil Fresh and executive co-producer Kwame.

ONEFOUR call ‘CAP’ on the discourse over drill in Australia and the recent shots sent their way in their first 2022 single. Standing tall as pioneers of the scene, the Mount Druitt group “bring [drill] back” and enlist a stack production team of i.amsolo, Sid Mallick, 99hurts, Nagra and BenzMusik. ‘CAP’ marks YP‘s first ONEFOUR single since his release, following his solo debut ‘Out Of Sight‘ earlier this year. Directed by Matt Wilson, the trio are reunited in the music video partly shot at Stateside Sports – still missing other members Celly and Lekks. Since their meteoric rise in 2019, ONEFOUR grip firmly on their crowns and prove they haven’t lost their edge on ‘CAP’.

Sydney-based Isadora serves up a new boiling hot ballad in ‘Final Dance’. The slow-burning R&B single sees her at her most vulnerable, with her angelic vocals singing of love, lust and heartbreak over the production of JaySounds. Proceeding her ‘Call Me Habibi’ collaboration with Faydee earlier this year, her latest single is her first solo outing for 2022 and is accompanied by visuals from Cisco Corea. Writing in an IG post on meeting JaySounds late last year – “We went to the studio one night with the intention of just exploring what sound felt most natural to me and we walked out with ‘Final Dance’.”

Western Sydney’s Big Skeez makes a heavy ‘BANG’-er  for his 2022 debut. The African-Australian’s latest record follows his stellar performance last year in solo efforts like ‘Up’ and collaborations with fellow NLV Records signees including Foura and Gold Fang. Big Skeez’s auotuned echoes and lyrical conviction slides over the wobbly and energetic production of Swick.The single’s music video is directed by Jervis Livelo who captures a dimly-lit Skeez and Ashleigh Tavares bringing the track’s bravado to life. ‘BANG!’ is the first of two new releases set to come out before his debut EP later this year.

Sydney trio Freesouls deliver a quick three-piece EP FS Type Beats and an accompanying music video for ‘Need You’. The short new project is the first music from the group this year aside from King’s features on ‘96 Bulls’ by GMC and Dxvndre’s ‘Royal Rumble’. Since their solo ventures in 2021, they’ve developed their careers and respective sounds to new heights, reuniting over MRVLS’ production on ‘Need You’. With the music video directed by Herbert Leota, King handles the melodic hook while they each offer their own verse. As one of the more unique and underrated crews in the scene right now, don’t sleep on Freesouls.

Hoodie4L drops his first single of the new year titled ‘Everything Dead’. Last month the Melbourne artist kicked his 2022 off with a TMC Media exclusive single titled ‘In My City’ for their 14TR YouTube series. Recorded at the Sound Of The Future‘s studio late 2021, the rousing trap offering finds the Liberian-born rapper releasing his fiery bars over the production of Davey Norris. In the ‘Everything Dead’ music video directed and edited by @nbreezy_1, he’s surrounded by fellow 4L members and fast-paced, illusive edits and transitions. Since his 2019 debut ‘Pain Away’ alongside Naat Bando, Hoodie4L has created a solid buzz for himself through his melodic street tales and plans to keep that momentum moving.