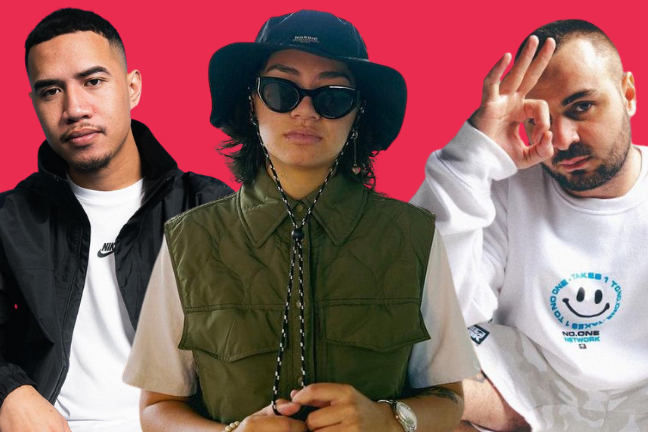 Collecting the latest adds from our New Hip-Hop Videos From Aus playlist; as always, highlighting the latest and best videos year-round from across the AU. Don’t miss out! Subscribe to our channel to be the first across the hottest new clips. Here are a few of our weekly favs but there are hundreds to watch in our Youtube playlist! Which video are you into this week? Slam the comments with who we missed…

Nokz78 releases ‘Ready To Ride’, his latest single and solo debut for this year. Making his first 2022 appearance on Lisi’s ‘Like This’ only last week, the Castille Records signee reflects on his come up over the guitar licks and tasteful 808s, produced by Brandon Jonak. ‘Ready To Ride’ combines his bar-heavy approach with the melodic vocals Nokz showed on 2021 cuts like ‘Moon’ and ‘Deep End’. Shot during a rainy night in Brisbane, the music video is directed by Ruffpops and captures Nokz and his team dressed in black and living the lyrics – “He knows our team always ready to ride.”

Pania and Unamii share visuals to their R&B and drill single ‘LETHIM4ALL’, one of 2022’s biggest link-ups yet. By carefully crafting a sound uniquely her own, Melbourne artist Pania has etched herself at the forefront of R&B in Australia. Teaming with the Brisbane-based Swish Music member Unamii, the Hamley-produced track is about “taking the pain from a past relationship and bringing it into the next one.” Directed by Arundati Thandur, the ‘LETHIM4ALL’ music video unifies two of the country’s rising powerhouses in a Hustlers’ inspired story. The clip is concluded by a “To Be Continued” title screen, alluding to her debut EP coming later this year and hopefully teasing even more collaborations like this.

TALAKAI – DON’T GET COMFORTABLE
(No1 Network)

Talakai is back in full force with his first record of the year, ‘Don’t Get Comfortable’. Promising a season of new releases and an album on the way, Newcastle artist Talakai spits over the moody and dark hip-hop production by Noah Harvey. Armed with braggadocious bars and focused flows, ‘Don’t Get Comfortable’ puts forth possibly the best version of him yet, following the already-impressive releases of ‘Still’ and ‘Never Change’. Filmed and edited by Kyel Golly during some behind-the-scenes shoots at H86 Studios, the music video teases new merch and captures Tala atop a custom-painted No.1 Network van.

Hoodzy returns from a year hiatus with ‘This Feeling’, her “version of a coming of age tune.” The heavy club banger is laced with electronic and punk influence that unveils a new melodic edge. The Forever Ever signee completed 2022 with her hard-hitting ‘Jumpy’ single produced by i.amsolo. After taking time to grow as a person and an artist, the WA-born artist is back with a new sound and single that she holds close to her, co-produced by Thom Crawford. Speaking on ‘This Feeling’, Hoodzy explains – “Growing up is tricky & getting caught up in a hectic crowd is even trickier.”

Mount Druitt group ONEFOUR air their frustrations on defiant new track ‘Cruise Control’. Following their ‘Cap’ release last month, JM, Spenny and YP have reconnected with director Matt Wilson for their latest music video. Produced by Vanaka, ‘Cruise Control’ elicits one of Spenny’s cleanest flows to date as JM comments on the ban of their live shows by authorities – “No options here we’re tagging toes, if you go missing no one knows, I guess that answers the questions to why we get no f***ing shows.” Can’t forget also about the energy injected into the track by YP, whose presence had been missed until his release from prison at the start of 2022.

Melbourne’s Zanda Elwood unveils his guitar-laden and introspective commercial debut, ‘Henny Smoke’. Written during a Hennessy and cannabis-infused writing session, Zanda raps about his mental health through poignantly resonating bars and imposing flows. Directed by ZacoBro, the ‘Henny Smoke’ music video captures his pensive imagery and promises to be the first of many new releases and visuals arriving this year. Mixed and mastered SLothy, the track follows his collaboration with fellow Melbourne emcees Drips and NATE6 on ‘The Plan’ earlier this year. Zanda and his live drummer Lil Gerbz will be performing the track as they headline the SP Records showcase on May 19 at 56 Bricks.