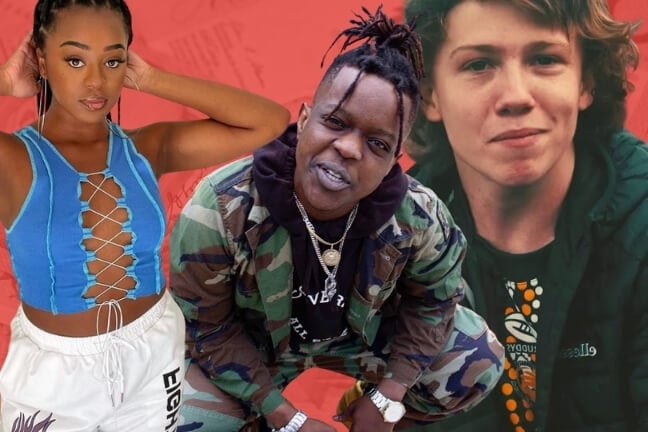 Week 20 of our New Hip-Hop Videos From Aus wrap is here! Bringing you the latest and best visuals to drop from the AU. Don’t miss a clip! Subscribe to be first updated with all the latest visuals from across the country. Be sure to let us know in the comments which clip is your fav this week..?!

With his new music video ‘Truth Be Told’, KidDave is no longer Melbourne’s best-kept secret. Provided with visuals by TMC Media, KidDave delivers his smooth melodies over soft keys and trap drums. The track shows the westside Melbourne artist moving cautiously, but still as motivated as ever. Despite releasing his first single in November of last year, ‘Truth Be Told’ is now featured on the 17-year-old’s debut project, ‘Melbourne’s Secret’.

Fresh to the Sydney scene, Maleek Hunter drops his latest track ‘Rolando’. Directed by Kota Sato, the music video depicts the rapper on his own, with no gimmicks and no fronting, as his eyes stay fixed on the money chase. With well-matched adlibs and 808s, Maleek Hunter evokes a Pop Smoke-styled energy across the drill instrumental and though he’s only got a few singles to his resume, ‘Rolando’ is his best drill effort to date.

Mawuli’s debut R&B single ‘J + L’ is a necessary throwback to 90s romance. With the notable sample of Janet Jackson’s ‘Any Time, Any Place’, Mawuli offers up her own playful R&B vocals. The track pays homage to Poetic Justice starring Janet Jackson and Tupac Shakur as Justice and Lucky, with the Bvisualised directed music video capturing Mawuli and her Lucky all loved up. With striking vocals and light-hearted lyrics, this latest single is a hell of a debut and puts Mawuli firmly on the radar.

Beefy Black demands all ‘Hand$ Up’ in his first release of 2021. Filmed and edited by No1 Network and Av Club, ‘Hand$ Up’ is a fast and fiery drill anthem from the South African rapper. With an excessive amount of talent pouring down from Brisbane of late, Beefy Black’s bouncing energy comes as no surprise. 2021 may be his breakout year.

Jxdah makes it look as simple as a ‘White Tee’ on his new track featuring Jireh and Drippyk. While Jxdah handles the hook and production on the opening instrumental, Jireh and Drippyk bring incredible offerings to the track, with their respectively red-hot verses and flawless flow switches. Jxdah changes the beat up for his own verse, with JTEAN handling the clean edits and visuals of Gold Coast’s cityscape. Hailing from the QLD, 17-year old Jxdah’s latest track advances his career as both a dangerous lyricist and talented producer.

Closing out the week of the youngins, Horgzy gets down to the ‘Nitty Gritty’. With its music video directed by Brida Films, ‘Nitty Gritty’ is an intimidating sophomore single from the 17-year old emcee. Produced by Blake MGR Beats with mixing and mastering by ESPA, Horgzy delivers punchline after punchline across the menacing sirens and pounding 808s. While he wears the influence of Huskii and Mitchos Da Menace on his sleeve, Horgzy’s development since ‘Squizzy Taylor’ reveals an abundance of potential.