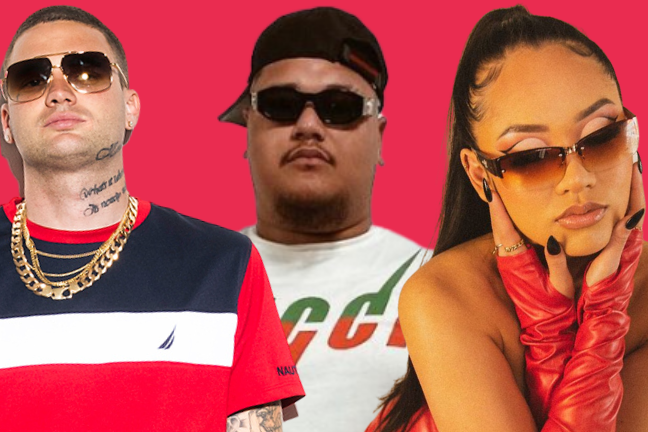 Covering the latest adds from our New Hip-Hop Videos From Aus playlist; as always, highlighting the latest and best videos year-round from across the AU. Don’t miss out! Subscribe to our channel to be the first across the hottest new clips. Here are a few of our weekly favs but there are hundreds to watch in our Youtube playlist! Which video are you into this week? Slam the comments with who we missed…

Enzo weaves countless ‘90s hip-hop references in his braggadocious solo debut, ‘Going Back’. Showcasing his effortless rhyming schemes over SLADE’s G-Funk inspired production, the Campbelltown artist further intertwines Australian hip-hop culture with its US counterpart. The music video is directed by Skylake Media who shoots Enzo, his rap partner Pistol Pete and Ay Huncho in front of a Rolls Royce. ‘Going Back’ marks his first release since their Finals EP in 2021 and to make the most out of his solo introduction, he’s featured on last week’s ‘Night Riders’, the posse cut from Ay Huncho who also enlisted Hooks, Hooligan Skinny and Nasa Nova.

Lisi and his Castille Records’ signee Nokz78 are all about their business on the new record ‘Like This’. Following his feature on ‘Pray For More’ by Melodownz, the Goodna artist shares the first single since his sophomore project Perspective in 2021. Produced by DJ Wreckah, the two bar-heavy QLD artists celebrate their success and engage in a proud back and forth for the track’s hook. Directed by frequent collaborator Ruffpops, the music video sees Lisi and Nokz dressed for the part – All business, all bars. While they’ve been on tracks together for years, ‘Like This’ is their first official collaboration under Castille Records.

Srirachi debuts a ferocious first entry to 2022 with her latest single, ‘U Want More Sir?’ Over anthemic production from fellow Melbourne creative TomDaHomie, the Vietnamese-Australian follows up her Acclaim All-Stars cypher freestyle and the 2021 track ‘Archimedes’ with a similarly quick-witted single. Directed by Josh Davis, the music video is set in a ‘60s American diner where Srirachi serves up platters of punchlines and the track’s cheekily addictive hook. Hoping to capitalise on her snowballing momentum this year, Srirachi’s debut project Srirachi Safari: Welcome to the Jungle Baby is set to release at the end of 2022.

Kerser returns with a vulnerable new track ‘Like I’m Trapped’, his first release since last year’s ‘Winner’. Produced by Open Till L8, the Campbelltown legend samples Joel Turner and The Modern Day Poets’ ‘These Kids’ and reveals his struggles with substance abuse and the toll it’s taken on his life. Teaming up again with Moonboy Entertainment, the music video depicts the helpless feeling of knowing you’re on the wrong path but with a poignant reminder of the light at the end of the tunnel. Kerser’s relentless approach finds him still at the summit of the scene while passing the baton to a generation undeniably influenced by the sickest.

Rooty Hill trio Doublesix return with their new party anthem, ‘Fan Love’. Building on the 2021 late additions ‘Candyshop’ and ‘Uh Oh’, the Western Sydney collective welcome the new year with an upbeat, melodic trap offering bound to get stuck on repeat in the warmer weather. It’s got everything you’d want in a summer hit – melodies, quotable bars and a lively beat by Grammy-nominated producer Willstah. The music video is directed by prolific videographer Aaron Bull who delivers more on-style visuals depicting the lavish lifestyle their music has found them in. With a heavy handful of singles in their discography, 2022 will hopefully see Doublesix share their first body of work.

Introducing a fresh face to Australia’s R&B scene, Christian Emelio shares his debut single, ‘Last Name’. Hailing from South-West Sydney, the 18-year-old singer showcases his polished vocals and alluring harmonies over the lively trap production of BeatsWithSheph. Directed by Dan Cernera, the Cerne Studios music video brings forward visuals of the intoxicating relationship he sings of, drawing influence from the likes of Chris Brown and Ty Dolla $ign. As the most recent signing to the Western Sydney based label Biordi Music, Christian Emelio isn’t out of place among their esteemed roster and ‘Last Name’ is an early indication of it.