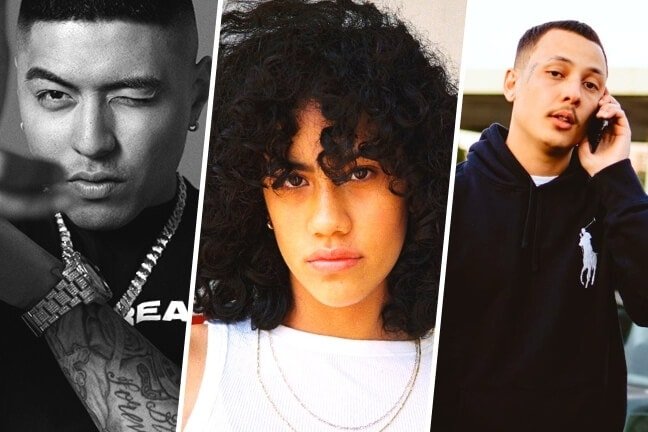 Our New Hip-Hop Videos From Aus playlist on Youtube is updated daily with all the best music videos from the AU. Here’s our latest half dozen favourites from across the culture. Drop into the comments and let us know which clips you’re feeling!

In one of the most exciting Western Sydney link ups, Becca Hatch drops ‘Please U’ featuring Planet Vegeta – a rich R&B lovestruck single with dancehall vibes. It’s hard to think that since her incredible debut ‘2560’, the young creative has managed to continually up her game. Shot at Four Walls, LKGD and SVNO slide onto the track with ease, complementing Becca’s vocals, while sublime production from i.amsolo provides a tidy beat breakdown down as JazzNOBODI finishes off with a sharp rap verse.

Isaac Puerile drops another sombre slapper in ‘Make It Out’, directed by fellow Sydney creative Aaron Bull. In abandoned and graffitied surroundings, Puerile makes use of his laidback delivery to rap about money pursuit, brotherhood and family before crooning about his love in the chorus. Also taking care of the production himself, Puerile is one of the most underrated gems in the scene – placing himself between two generations, delivering lyrical content similar to Nter and Huskii but mixing in the melodic tone of the new era.

As the first single from his second album 16, Hazy enlists some scene heavyweights for the stacked cypher styled ‘SHUTDOWN LOCKDOWN’ (S.D.L.D). Shot at the Lord Gladstone pub in Chippendale, the energetic ‘S.D.L.D’ features a massive host of Sydney talent. Posted on the Illeqwip YouTube, each artist delivers a hasty but fiery verse with Hammy and Nooky battling for the best effort. Let us know who you think had the best verse? 16 by Hazy features 16 different artists from across the country and will be released on the 19th of February.

Hooligan Hefs comes to play chess not checkers on his new ‘Checkmate’ freestyle, directed by Kreezy Visions. The 67 artist has dabbled in a handful of different genres since bursting onto the scene, but his new freestyle finds him returning to rap. The beat features eerie dancing keys and a deep kick drum as Hefs keeps it clear and simple in his delivery. The black and white edited video sees Hefs in the booth, boastfully reflecting on his past two years of grind and come up.

Jesswar sounds the alarm for her new single, ‘Medusa’. The Brisbane artist is known for her explosive energy, and the latest offering is no exception – packed with screeching sirens and a money hungry attitude. Jesswar has crafted a unique sound for herself, and her latest effort, if you aren’t already, will have you dying for festivals and gigs to be back. ‘Medusa’ is taken from her upcoming debut EP ‘TROPIXX’, out on the 5th of March.

Trilla Venus welcomes us to the Trap matrix in his latest track ‘Pop It’ featuring Kado Woods. With a Latin influenced and atmospheric Trap instrumental – way Trilla’s been dropping, it’s only a matter of time before one of these goes crazy! In the Jack Nielson directed clip, OGM member Kado Woods, brings a deeper toned delivery for his slick feature verse, giving ‘Pop It’ another level of flavour. There’s no denying the Matrix references, but whether you’re popping the red or blue pill, make sure you’re keeping locked to these two rising stars.