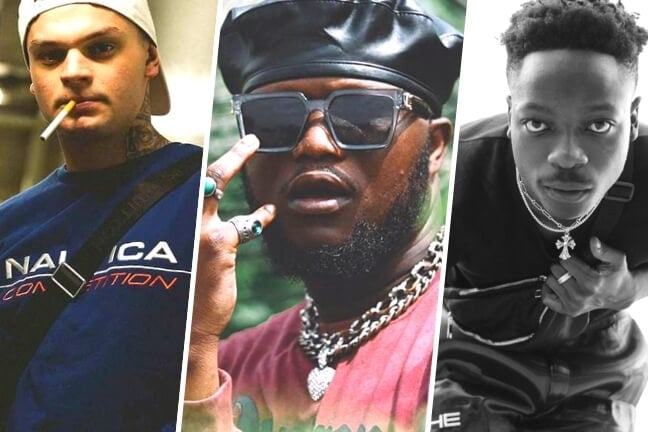 The new year has rolled in and new clips have started dropping from across the culture. Every day you can catch all the best vids located in our New Hip-Hop Videos From Aus playlist on Youtube. Here’s 6 of our favs to release over the break. Dive into the comments and let us know which clips you’re vibing and be sure to subscribe to our channel on Youtube! ?

Mike Akox offers his knack for infectious Afro-Beat once again on his recent collaboration with award winning Afro-Pop artist Stonebwoy. Directed by Rex, the music video features the two creatives in Akox’s home country, Ghana. If it’s not the bouncy verses, there is no doubt the Mario-referenced chorus will get your hips moving. Though Afrobeats didn’t quite have the year that Drill had last year, it’s definitely up next and Mike Akox is at the forefront of bringing the sound to Australia.

Late last year, Drips, Kmac and Mr.C joined forces for the playful and carefree street anthem, “Stuck”. While all three of the emcee’s bring a different flavour of Oz rap, it works better than it should. Drips does the heavy lifting with his melodic chorus while Mr.C feels at home on the beat and sets the bar. However, Kmac doesn’t let anyone think he can’t handle himself, offering a hasty and bar-heavy verse. Drips closes the track out with ease and just like that, you’re left wanting more. It’s an unexpected trio of slightly varying styles, but hopefully “Stuck” isn’t the last we see of them together.

Captured in black and white visuals by Fun Films, “Maintain” is the eery new banger from Manny Lado. Coming out of Geelong in Victoria, Manny remains slick with it, delivering shots at backstabbers and anyone else putting a target on his back as he gears up for The Bayside LP sometime in 2021.

A1Nate and AKfrm600 team up on their late night, moody Trap joint, “Dirk”. While A1Nate’s verse is filled with flow switches and holds it down, it’s AKfrm600’s catchy hook that shines brightest. Showered in the echoey adlibs of AKfrm600, A1Nate’s style contrasts effortlessly, creating an impressive collaboration between the two Sydney creatives.

Queensland duo, Lavanda, have released visuals for their new track “MICKEY O’NEIL”, titled after Brad Pitt’s ‘Snatch’ character. It’s the first time we’ve checked out the two and despite their small discography, it’s evident the lowkey and lo-fi vibe setter that is “MICKEY O’NEIL”, is their best work yet. CY Entertainment provide the dizzying visuals to fulfil the smoke sesh.

Take note now, BaBy Prince is going to do numbers in 2021. He dropped his “Spriteschool Vol. 1” project in 2019 and has since released a handful of singles with names like Blessed and Creed Tha Kid respectively. Though we’ve come to known the Brisbane based rapper for his deep catalogue, Baby Prince has become more careful in his releases. It goes without saying the change of pace has paid off with the Zimbabwe born artist performing his unreleased R&B/Trap heater “Over Sex” via Tirade World. With strong sonic resemblances to Young Thug and Roddy Ricch, Baby Prince’s latest is a convincing reminder of his evolving talent.