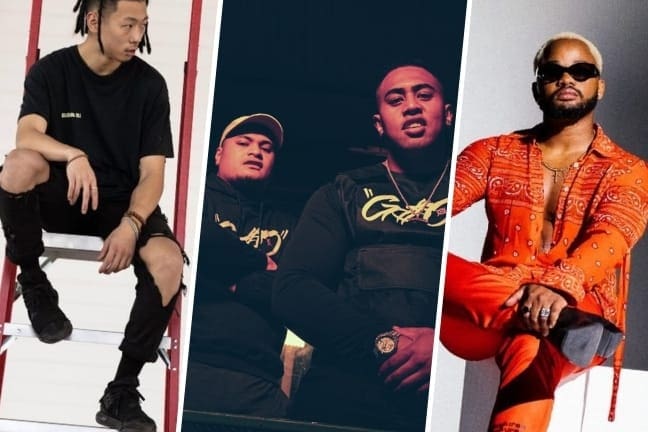 ONEFOUR enter 2021 with the first track to their three-part series, ‘Street Guide (Part 01)’. The Western Sydney collective spent the back half of last year expanding their sound with their debut project, Against All Odds. In their latest Willstah and I.amsolo produced track, JEmz and Spenny return to their drill origins to deliver a relentless performance, with an intimidating beat switch and final verse from JEmz closing the song out.

With the release of their ‘Letters to Chi-Chi EP‘, Planet Vegeta drop stellar visuals to ‘Sailor Moon’. Paying homage to the animated series of the same name, ‘Sailor Moon’ is a jazzy and sauve hip-hop experience. Jazz NOBODI ties in the rap flavour with his verse, LKGD handles the infectious hook and SVNO’s R&B vocals completes the exciting and soulful sound we’ve come to love from Planet Vegeta. With the music video directed by Sonder Films, ‘Sailor Moon’ is one of the most entertaining moments on their debut EP, which says a lot for such a well-executed and enjoyable project.

After a quiet 2020, Brisbane artist Carmouflage Rose makes his grand return with his latest track, ‘Tipsy’. ‘Tipsy’ is a thrilling and hypnotic tune packed with a brass-dominated chorus and electrifying vocals. In the music video directed by cassettekidd and John Baxter, the intoxicating visuals show Rose being spiked on a night out. ‘Tipsy’ was released as a 2-track drop alongside ‘Powerplay’, both said to be included in an upcoming project from the QLD creative.

Melbourne’s Carter gives a passionate showcase of rock, rap and alternative pop for his new single, ‘Avalanche’. Directed by Nick Rae, the music video features some incredible cinematography that brings to life the tracks’ themes of loneliness and heartache. Carter showcases a variety of flows and impressive vocal range over the escalating electric guitar instrumental. With ‘Avalanche’ as the first single of Carter’s upcoming Project EDEN, 2021 is looking to be a big year for the 3k artist.

Hindley and Yung Shogun, two emerging artists from Melbourne, team up for ‘Kerosene Skin’. With a simple guitar sample delivering a lo-fi boom bap energy, the two emcees flow with ease and prove exactly what they rap – “I wasn’t meant to be matched.” Directed by Park Avenue Media, there’s a sense of serenity to ‘Kerosene Skin’ as Hindley and Yung Shogun are captured in vibrant greenery. The pair’s effortless chemistry is on display again following their collaboration last year on New Wave Infinity’s ‘All Corners’ project.

Freesoul’s member, Jamel, returns with visuals to his sophomore solo effort, ‘24/7’. While his first release, ‘Remedy’, was a convincing debut featuring Rops1, ‘24/7’ tests how well the Sydney artist can handle a track on his own. Passing the test with flying colours, Jamel’s melodic and nonchalant delivery dances across the instrumental of Latin guitar licks and thumping drums. In the Gunsta directed music video, Jamel gives a taste of the imminent solo success as he gears up to drop debut mixtape, ‘Livo Boy.’