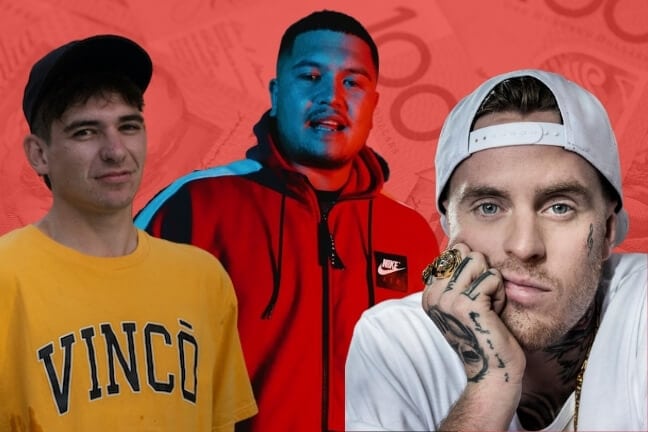 Here’s some of our Week 13 favourites from our New Hip-Hop Videos From Aus playlist on Youtube. Make sure you subscribe to keep up to date with all the latest clips from the culture. Slide in the comments and let us know which clips you’ve vibing!

As one of the scene’s biggest stars over the last decade, 360 makes his official return to the mic in his new track, ‘Stand Alone’. Shot as a one-take from the Melbourne artists’ studio, 360 is bar heavy when reflecting on past departures from the game, countless hospital and therapy visits, and cutting ties with friends. With his storytelling as sharp as ever, there’s no doubt 60 has plenty of tales left to tell. The YouTube one-take ‘Stand Alone’ welcomes 360 back to the scene, with teases of plenty more material to come.

Newcastle’s Mason Dane delivers some VHS inspired visuals for his latest drop, ‘RIRI’. In 2020, the young artist made his name known through features on tracks with Brandon Stone, Olive Amun and Creed Tha Kid – fast forward to this year and the young prodigy is looking to truly etch himself in the scene. With dreamy 80s synths, ‘RIRI’ is a melodic serenade proving Dane’s hit potential and knack for catchy hooks. It’s hard to stand out in the flood of new talent pouring from the scene, but Mason Dane makes it look all too easy.

Lukan Raisey’s new music video for ‘SAMEHOOD’ comes from the final track on his February-released project. The New Zealand emcee enlists the help of Tee and Rapz to deliver some smooth verses on a Nipsey Hussle influenced track. Lukan Raisey samples 702’s ‘Get It Together’, who many will be familiar with from the 2019 DJ Mustard and Roddy Ricch hit, ‘Ballin’. ‘SAMEHOOD’ is the seventh track off ‘THE LAY UP’, out now on streaming services.

KODI CUNNINGHAM – BACK IN A BIT FT SHADOW
(Dylan Guy)

The WA summer seems to never stop with Kodi Cunningham and Shadow bringing the heat in their new track, ‘Back In A Bit’. Filmed and edited by Dylan Guy, the Perth locals are carefree in their new clip as they deliver playful wordplay with their grime flow. ‘Back In A Bit’ is a testament to the talent in the 6k that flies under the radar more often than it should, but Kodi Cunningham and Shadow are two names who have been looking to change that narrative over the past couple of years.

E.MAD – IF YA WANNA
(Patrick Curry)

Melbourne emcee E.Mad drops one for the boys in his music video, ‘If Ya Wanna’. E. Mad’s delivery rides effortlessly over the hard-hitting drums, as he raps about his love for his friends and home city. The track was released in March as part of  ‘Iso Tapes‘ that features production from G Man. “If you wanna dance, you can dance. If you don’t, don’t. Just sing along…” Enough said.

Shely 210 tells you exactly what you’re signing up for in his new track, ‘Terms & Conditions’. Directed by Domcben Films, ‘Terms & Conditions’ features some clean guitar licks and a hypnotising vocal sample while Shely raps comfortably, letting us know all the T&C’s about his lifestyle. Earlier this month, Shely announced his debut project ‘No Handouts’, set for release soon. This is one to keep an eye out for.