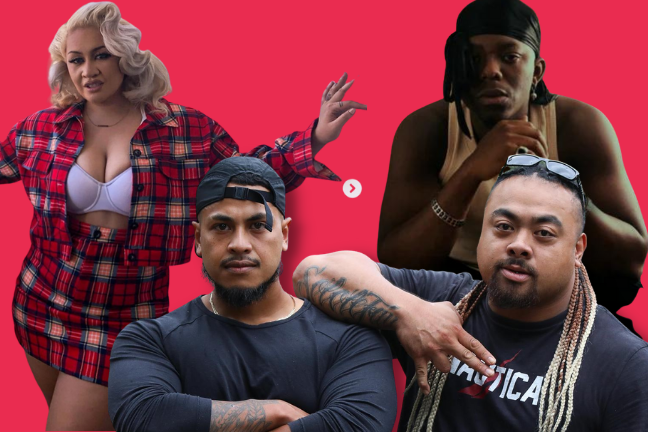 Here are the fresh batch of visuals via our New Hip-Hop Videos From Aus playlist; as always, highlighting the latest and best videos year-round from across the AU. Don’t miss out! Subscribe to our channel to be the first across the hottest new clips. Here are a few of our weekly favs but there are hundreds to watch in our Youtube playlist! Which video are you into this week? Slam the comments with who we missed…

Up-and-coming rapper Walkerboy shares his high-octane first single, ‘On A Roll’. First appearing alongside his cousin T Breezy on ‘M.2.G’, the Gamilaraay artist now slides through with his standout solo debut over the hard-hitting production of UTILITY. In the music video shot by Jeremy Elphick and Donnie Parkinson, Walkerboy raps with a rapid-fire flow and unique cadence about his come-up at the intersection of his career heating up – “Now I’m out here on the grind trynna get up to the top … and while I’m waiting for that time, imma still be slanging rocks.” He’ll be performing on March 25 at Parra Nights’ Erby Place Stage alongside Snoee Badman, Pania and others.

Sydney artist Bea Moon re-emerges for her second release ‘Chains’ under the new moniker, Sailor Goon. Since her 2020 single ‘Chronic’, the R&B and pop singer has been on hiatus preparing for her debut project. Following her club-ready OpenTillL8 collaboration titled ‘Nobody Else’ that dropped in February, she enlists the production efforts of DJ Sefru on her latest track. In the visuals by Sonder Films, she performs in front of multiple sets including a show-stealing shot of her delivering melodic bars in front of an imposing full moon. It’s been an exciting start to her new artistic chapter that’ll unfold further in her first body of work later this year.

21 District welcome back Malik and Ron Gotti from incarceration with ‘Compressor’, their first track together in over two years. The Inner West Sydney group reunite over the ominous drill production of Thrillboy with Jay Lekz handling the fiery hook. Directed by Herbert Leota, the visuals are shot by Skylake Media and depict them stronger than ever. For the past few years, Lekz and A1 have been holding it down dropping solo tracks and collaborating with Mexongan and Nasa Nova. With even more strength in their numbers, ‘Compressor’ is an overdue return to form and the start of an even bigger 2022.

KILL Carter and Dann Dib shoot and score in their swaggering new collaboration, ‘Ballin’. In 2021, the Chinese-Australian artist released his debut alt-rap EP titled EDEN while Dann Dib shared a handful of tracks with R.em.edy, Nomad and JDro. Coinciding with Dib’s ‘Calories’ single earlier this year, Carter and him link for another fast-paced hip-hop release. Shot by Nick Rae, the entertaining Braydenfunfilms-directed music video features fellow Melbourne creatives including YNG Martyr, Avalon Hope, KVNYL, Double O Smoove and more. Boasting clever lyricism and energetic flows throughout, the pair have swung into 2022 with a bouncy addition to their respective catalogues.

Western Sydney artist Selasie turns to introspective melodies on his second offering, ‘Survival’. Following his 2021 debut single ‘Unnatural’, the 23-year-old has returned with a raw and dark R&B and rap cut exploring “the various struggles during [his] adolescence in Western Sydney.” Accompanied by a music video directed by Kyle Caulfield, Selasie weaves hypnotic melodies among his showcase of bars rapping about his fight or flight mentality and praying to a higher power. To celebrate the release of ‘Survival’, Selasie will be performing at the Oxford Arts Factory, Sydney on March 30 alongside  Renzi and Boosie.

While some keep tabs on their ex’s IG activity, Chanel Loren is checking your listening habits on her debut single, ‘Playlist’. Before moving from London in her late teens, the British-Caribbean artist attended the iconic BRIT school (whose alumnus include Adele, Loyle Carner, FKA Twigs and many more). In the alt-R&B and UK garage track, Chanel uses soulful vocals and intimate lyricism to navigate through her heartbreak before realising the loss is his own. ‘Playlist’ is an addictive first offering from the Sydney-based singer, equipped with a music video directed by Neil Sura that juxtaposes her alone in her room to partying with good company.