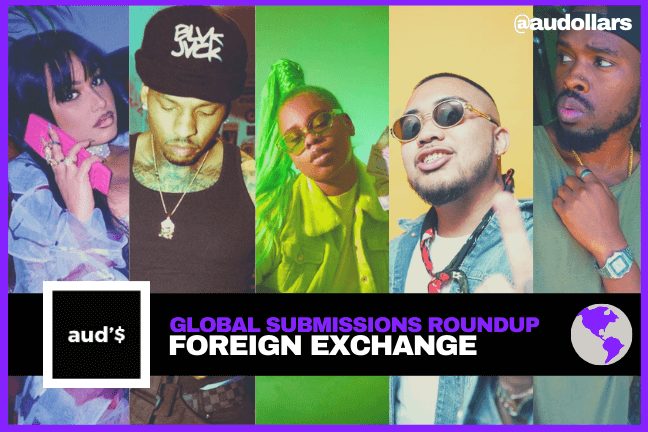 Check out our first batch below, go follow some new artists and stay locked to our Spotify to be listening on repeat.

Hard hitting in your face big room trap / dubstem / EDM. Flosstradamus styles. BLVK JVCK is the new project of producer Jermaine Jackson who has previous creds for DJ Khaled, Rihanna and more. He’s linked up with Comethazine for this one and it’s big.

Coming out of Johannesburg , South Africa AKEEM1ST brings a confident delivery and strong cadence on this turn up number. Mixes a wide array of flows with a hint of autotune and a heap of flexes, a ‘la Big Sean.

AUDRIE POWELL – YOUR GIRL
Hard to believe this is the first release for Audrie Powell, a young singer-songwriter from Portland on the USA’s West Coast. This one is a sultry R&B jam you’ll dig if you’re into Jorja Smith type sounds. Keep an eye out for her.

A cultural melting pot, PRTYFOUL. is the Boston based Future Trap House project of producers HAIKI and NoBveno mixing their Brazilian and Filipino ethnic elements. This track will have you moving non-stop in an Afrobeats direction, think Major Lazer.

Yeh good luck getting this hook outta your head. Alex Mali is a fast rising name from Brooklyn, New York that you’ll no doubt be hearing more from. Full of attitude in a Lil Kim type way but with cheeky Doja Cat elements. This goes.

LOVE ROSSYLO – ON PURPOSE
Smooth R&B vibes outta California, Love Rossylo sounds like a mix of Ne-Yo and Brent Faiyaz complete with great vocals and big 808s. This one is a bump n grind type jam.

NATHALIE SADE – WOULD YOU LOVE ME
Somewhere between Jhene Aiko and Jennifer Lopez with playful lyricism and reggaeton influenced beats. Nathalie Sade is an R&B/Soul talent from South London who connects effortlessly with Snap Capone for a chilled number.

COOPER D’ETAT – TWEE IN DE NACHT
Half English, Half Dutch. We just enjoy some of the patterns regardless of what they’re saying. Cooper D’Etat, Benny Wijs and Clout Moret are a trio of battle rappers from The Netherlands who trade bars of early 2000s Slim Shady type flows.