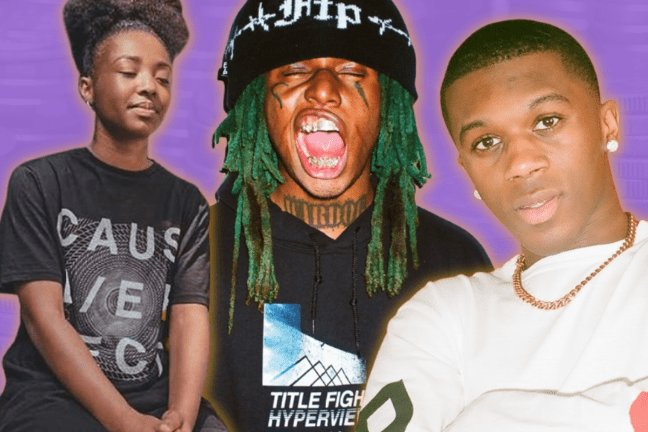 Featuring a selection of emerging tracks from across the planet that should be on your playlists right now! Keep it locked to FOREIGN EXCHANGE; the spot to find some new talent on the reg. Keep updated via our socials, YouTube and Spotify, and if you’re outside the AU and keen on some AUD’$ love, be sure to drop in your latest release via Submithub.

KHI INFINITE – LOVE FOR YAH
For Fans Of: B Wise

Virginia artist Khi Infinite shows his ‘Love For Yah’ on the lead single from his forthcoming Take What You Need EP. With smooth guitar riffs accompanying the upbeat Hip-hop production, the 20-year-old alternative R&B artist rides the vibe with his richly layered sun-kissed melodies. Khi says the project follows his inner struggles with lust, love and falling in and out of the darkness, with ‘Love For Yah’ delivering a moment of gratitude for the ones through it all.

Maryland emcee Leek Mali declares ‘Summer Forever’ on the title track of his new EP. The 22-year-old delivers poetic lyricism over the soul-infused beat, weaving through a variety of cadences with confidence and conviction. His latest four-track EP is our first look at Mali since dropping back to back projects in his breakout year of 2020. Backed by dizzying female vocals and Andre 3000-styled vocal inflections, ‘Summer Forever’ adds a modern twist to golden era soul hip-hop.

TRTL – COULD BE
For Fans Of: Becca Hatch

TRTL’s soulful and uplifting new anthem ‘Could Be’ reveals the second taste to her upcoming EP Perception. Enlisting AJ Tracey producer JBJ to lay down the 90s R&B sonics, the North London artist fills the track with heartfelt and hopeful bars of acceptance and appreciation. The second verse also offers a hint of Afrobeats influence showcasing the 23-year-old has no trouble adjusting her mesmerising vocals across a range of genres. ‘Could Be’ is an uplifting and encouraging performance for times of uncertainty.

Luss makes his incredible and poignant debut with ‘No Angels’ featuring and produced by Joe Craze. The Bronx NY artist reflects on the night he was arrested at a peaceful protest across the track’s soft guitar plucks and gliding 808s. Luss’ melancholic and heavenly vocals wander to a place of reflection before Joe Craze adds his own incredible vocals and slight autotuned inflections to the track’s vivid storytelling. ‘No Angels’ is one of the best Foreign Exchange debuts, don’t sleep on this one.

Sheffield OG Deep Green continues his paper chase and Trap-Hop sound on his latest cut, ‘Bandz’. The forceful and raw performance from the UK artist marks his third release of the year. DG provides some money motivation over the YDMO-produced instrumental littered with punchy 808s, vocal samples and subtle guitar strings. DG’s been in the game for over a decade but he’s still producing effortless Drill anthems.

KB MIKE – USED TO
For Fans Of: Baby Prince

Next up in the overpouring talent from Chicago, KB Mike reveals his single, ‘Used To’. The 20-year-old artist burst onto the scene last year with his ‘Goodbye’ record, delivering the first taste to his poignant melodic vocals that have since developed it into what we see on ‘Used To’. Across the piano-led trap production, Mike showcases his raw songwriting as he dodges the pitfalls of violence and heartbreak on the sombre single. The young star has been busy at work with 7 singles under his belt for the year already, and an anticipated full-length debut on its way.

From the inner boroughs of London, GIO turns the heat up with his ‘Hot’ new Drill single. Premiered via GRM, ‘Hot’ gives a glimpse into GIO’s affluent lifestyle as a celebrity jeweller and up-coming artist. Produced by Caprishaq, the Hackney rapper puts his lyrical calibre on full display before practicing a more melodic flow over the trap-drill hybrid beat. With ‘Hot’ being his third entry in 2021, GIO looks to be more focused on his music this year and the result is fire.

KDX – NO BODY, NO LOVE
For Fans Of: KingTheFreeSoul

Nigerian-Irish artist KDX drops his brand new single ‘No Body No Love’ in collaboration with Jester Black. Across the Blxst-styled guitar-driven instrumental, KDX bounces from Hip-hop hooks to R&B melodies before proving his wordplay in the heart of the track. Speaking on the track, KDX said “No Body No Love is about separating yourself from relationships that may not be the best for your energy and celebrating being alone over disingenuous company.”

Richard Carter and Deeriginal call for warmer weather on their hot new UK anthem, ‘Mr Summer’. London artist Deeriginal and Carter eagerly celebrate the sunshine with an energetic across a flurry of flows on the self-produced track. ‘Mr Summer’ boasts a soulful Chicago influence with catchy vocal stacks, minimalistic piano chops and bouncy drums. The fresh track from the UK pair offers a burst of brightness in a song and has us gearing up for Summer already.

ZILLAKAMI – NOT WORTH IT
For Fans Of: Phi11a

City Morgue member ZillaKami takes his rock influence in a new lane on his latest cut entitled ‘Not Worth It’. The New York artist just dropped his DOGBOY project last week, capitalising on his recent single run including ‘Chains’, ‘Frosty’ and ‘Badass’ featuring Lil Uzi Vert. As one of the more underappreciated emo-rap originators, ZillaKami’s distorted grunge-dominated track allows the NY artist to flex his falsetto and drop introspective bars like the hook’s opening line – “Everybody loves me, but I don’t deserve it.”

If you’ve been on Tik Tok the past couple of weeks, chances are you’ve heard the snippet to Justus Bennetts’ indie rap record ‘Bad Day’. The Carolina-based artist gives an updated version to Chance The Rapper’s verse on Action Bronson’s ‘Baby Blue’ as Bennetts’ recalls his past relationship and sends bars of the bad karma coming their way. Falling somewhere between alternative Hip-hop and pop, TikTok virality has birthed another young new artist. Justus Bennetts’ upcoming debut EP will be released in the coming months.

From South West London, JRD’N drops his new freestyle ‘Sweetstyle 001’. Kicking the track with his smooth R&B vocals, JRD’N sings his melody across the slow piano keys and Hip-hop production. With the 808s rolling in the UK rapper lets the bars roll out, effortlessly flexing his melodies at any chance he can. The track follows on from his first 2021 release ‘Roll In Me’, an upbeat track that brings the same kind of sweetness his latest single offers.