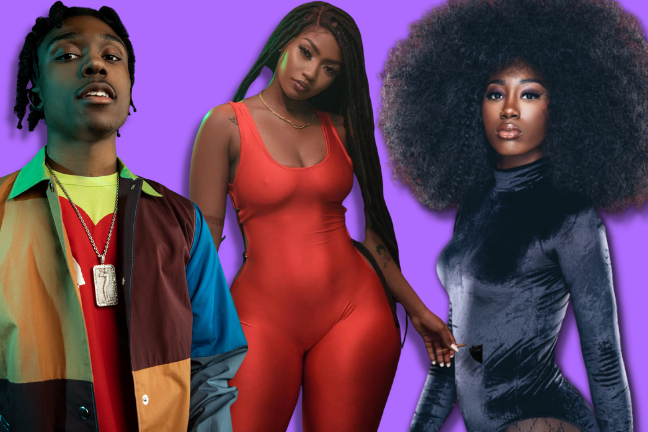 Curating six emerging global acts that you need to be across! From all corners of the planet, these emerging stars should be on your playlists right now! Keep it locked to FOREIGN EXCHANGE; your home to find new talent on the reg. Stay locked via our socials, and if you’re outside the AU and keen on some AUD’$ love, be sure to send us your latest drop via Submithub.

Yxng Dave shares ‘Canada Fur’, his debut single under KSI’s new label The Online Takeover. His first release dropped back in 2019 and it seems as if his claim to fame is imminent. He’s from Columbian and Spanish descent, putting his own flavour on an already sparkling sound as the label’s first signee. Stylistically similar to Central Cee and Arrdee, Yxng Dave possesses a sharp cadence that he weaponises over the melodic drill production of DJ Fricktion. It’s already amassed over 500,000 plays on Spotify and everything looks up for the bright star, recently opening for KSI at Wembley Stadium and before that, performing at the O2 Academy 2 Oxford.

One of the hottest up-and-comers Scorey continues to heat up the underground with ‘No Names’. Inspired by artists like Lil Wayne and 50 Cent, Scorey has been on a tear since his debut in 2019. Polo G was his first co-sign after hearing ‘Letter To Mom’ who eventually invited him on tour and signed him to Only Dreamers Achieve. Since then, Scorey has released just shy of a dozen singles, notably ‘Die Young’, ‘Girls Love Rod Wave’ and his feature alongside Dro Kenji on Internet Money‘s ‘Finders Keepers’ in 2021. After his Catch Me If You Can EP last year, ‘No Names’ is his most recent release with a highly-anticipated debut album on the horizon. Drawing on the same production style as Polo G, as well as cadences and flows, he’s got a more natural ability to sing and dive into those vocal pockets.

Pakistani rapper and singer Eva B and her new single ‘Rozi’ were featured in the debut episode of Marvel and Disney+‘s new show, Ms. Marvel. Produced by Gingger Shankar, the Urdu hip-hop track reflects the Pakistani and Indian influence of the six-part series and marks Eva’s fourth single in 2022. Playing at the first episode’s end credits, ‘Rozi’ mixes South Asian music with a sprinkle of South LA as she raps with absolute conviction against oppressors. Titled as one of Pakistan’s first female rappers, her anonymous identity links both to her own safety as it does her religious practice. She debuted only last year with ‘Mukhtasir Baatein’ and has shared a handful of tracks since but with the newfound attention from the series’ streaming audience, there’s no limit to her power.

JADA KINGDOM – FLING IT BACK

Jada Kingdom fuses R&B, dancehall and reggae for the ultimate summer vibe on ‘Fling It Back’. The Jamaican-born artist gained her following back in 2017 after launching her swimwear line and debuting her first release ‘Love Situations’. Over the last five years, Jada has collaborated with a diverse range of artists including OVO‘s Popcaan, YFN Lucci, Vybz Kartel. Produced by DJ Hardwerk, ‘Fling It Back’ is a vibrant inclusion to her recently released four-track EP titled New Motion. The song samples parts Leftside and Esco‘s ‘Tuck In U Belly’ and was recorded two years ago, followed by its music video directed Effy Kawira that was shot in 2021. The Caribbean vibe combined with her upbeat melodies is a certain hit that might make listeners pop a hip if not careful so listen at your own risk.

GirlzLuhDev was just 17-years-old when his 2020 breakthrough hit ‘Tooka’ took over. The ex-basketball star, who had his sights set on a college program, was cut from his high school team and decided to pursue music inspired by artists like Lil Uzi Vert, Drake, and Future. After his debut project Day 1 Starter last year, the California native returns this year on ‘Kill Time’ combining his influences with the signature West Coast style of rapping, reminiscent of artists like Blueface and AllBlack. His recent release adds to an already impressively diverse discography, demonstrating his natural knack for making a wide range of melodically satisfying and catchy songs. Recently signing to Capitol Records, the future looks bright for the teenager.

Alabama’s own Flo Milli puts on for her city on ‘Conceited’. Rising through the ranks since her 2018 debut, Flo has cemented herself as a clear frontrunner for the new generation of female emcees. She talks the talk and walks the walk; her music is infectious, and she has all the swagger and self-confidence you need in the rap game. She’s already a star, receiving co-signs and collaborations from artists like BENEE, $NOT and Rico Nasty. The 22-year-old has been on a role, dropping four singles this year with ‘Conceited’ offering the same energetic and unique delivery that first sent her viral. Hopefully her output this year is culminating to her sophomore project after 2020’s Ho, Why Is You Here? received critical acclaim.