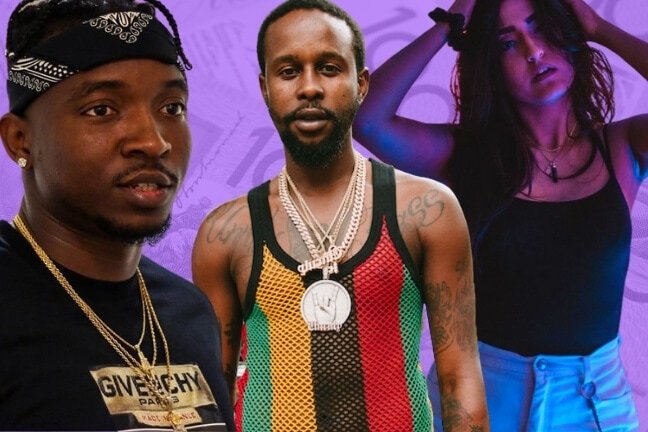 Featuring a selection of emerging tracks from across the planet that should be in your playlists right now! Keep it locked to FOREIGN EXCHANGE; the spot to find some new talent on the reg. Keep updated via our socials, YouTube and Spotify, and if you’re outside Australia and keen on having your track featured on AUD’, be sure to drop in your latest release via Submithub.

Jamaica’s Chase Soundz sets the vibe this week, paying homage to his culture with his latest Dancehall single, ‘Bay Gyal’. As Montego Bay lingo drives the song, Chase Soundz trades in his usual Hip-hop sound for playful bells, muted xylophones and a heavy influence of Reggaeton and Dancehall. As his second release of the year, Chase Soundz makes a successful leap into new sonic territories.

Revealing yet another track from his upcoming album, Trendsetter, Leno TK and Jasmine Eva talk relationships on their glossy and melodic new collaboration, ‘Hold Me Down’. With guitar strings, trap percussion, and R&B vocals, the Ghanaian-Canadian rapper and female feature share perspectives of two people trying to fix a relationship that might not be able to be fixed.

After returning from the United States to his home city of Hong Kong, noodłe stays ‘Schemin’. Bursting with infectiously punchy drums and uplifting guitar riffs, ‘Schemin’ is an energetic trap pop record that celebrates the turning of a new page in a story of representation that longs to be told. His latest track of motivational vocals and soulful samples should have you keeping a close eye out for the young artist.

Kay Rhoma is way too busy living lavish to care about his haters on his single, ‘Came Up’. With a YG styled delivery, the Nigerian born and Houston based artist brings his own Southern flavour of up-tempo and bouncy energy to this hustlers anthem. Though it’s one of the three releases from Kay Rhoma this year, ‘Came Up’ is a stand-out moment in his discography.

London based Flowery Beard reveals the title track to his brand-new debut EP, ‘Mawon’. Intertwining jazz, hip-hop and afrobeat, Flowery Beard creates an intimately melancholic yet hopeful sound with his latest track. With a heavy bass line, soaring vocals and a verse in French, the track is flourishing display of the quality of music you can find more of on his Mawon EP.

Natalie’s new self-produced ‘Guilty Pleasures’ is an unwavering and liberating journey through her experiences as a feminine-presenting lesbian. As the track’s alternative R&B production progresses with melancholic guitar, trap drums and sinking 808’s, Natalie croons and mellifluously challenges the stereotypes of a gay woman. Feeling invalidated for her experiences and sexuality, ‘Guilty Pleasures’ is an empowering display of Natalie’s talent as a producer, singer and songwriter.

Dancehall’s leading superstar, Popcaan enters ‘Survivor’ mode in the lead single from his collaborative Solid Focus Riddim compilation. The EP presents four tracks from the same instrumental, with each member of the Unruly Entertainment camp giving their own performance. As the Jamaican artist celebrates the struggle, ‘Survivor’ borders on a reggae and R&B fusion, expanding the diverse sounds that Popcaan has offered throughout the years

Ali Cashius Jr’s new record is a showcase of the Detroit scene as HK Meek and RaHk join him on ‘Violent’. The chemistry between the Michigan artists shines bright in this upbeat cinematic record where each emcee details an inside perspective to the happenings in their city. Aside from the depictive verses, the chorus on ‘Violent’ is an obvious highlight of the track and truly makes this the Detroit anthem that it is.

Shy Billz new track ‘Melodies’ etches his name on the roster of rising stars from Brooklyn. Similar to NY native A Boogie Wit A Hoodie, Shy Billz provides an autotuned delivery and hopeful melodic trap style as he offers lyrics of loyalty and fake love. ‘Melodies’ is the second release from Billz in 2021, and the Brooklyn artist plans to continue dropping single releases before he begins to work on a bigger project.