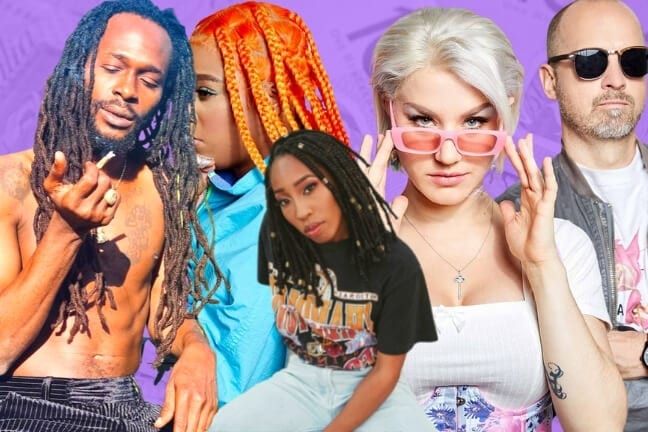 FOREIGN EXCHANGE is your spot to find some new talent on the regular. Featuring a selection of emerging tracks from across the planet that should be in your playlists as of today. Keep updated via our socials, YouTube and Spotify, and if you’re outside the AU and interested in an AUD’$ feature, please slide us your latest via Submithub.

Memphis musician Ashley Artisan’s ‘Nine To Five’ is a jazzy and soulful desire for more than just a day job. With cleverly used sound effects and adlibs, Artisan describes her office shift through vivid storytelling and a dynamic delivery before the brass instrumentals help her sing the chorus. Though Ashley Artisan is a Tennessee talent, the Chicago sound of Noname and Chance The Rapper makes ‘Nine To Five’ a can’t miss.

Jesse Royal and Vybz Kartel contemplate the meaning of wealth on their latest reggae cut, ‘Rich Forever’. With Xtreme Arts handling the visuals, the Jamaican artist delivers his grand and electrifying performance in the hills of Kingston. ‘Rich Forever’ is set to appear on Royal’s upcoming sophomore album Royal, set for release on June 11.

‘Mamasita’ reunites the Mad Circuit trio of JR, Sereda and LG for another dancefloor-ready anthem. Following up their ‘My Fit’ hit, With Norweigan producer JR handling the Spanish-influenced instrumental, Sereda delivers sexy R&B and Pop vocals while LG stays loyal to her strong Hip-hop background. The Hip-hop club heater boasts a spicy Latin flair full of sonic variety and energy.

$TEVIE – ROCKIN WITH ME

Colorado artist $tevie revives the ‘Pony’ by Ginuwine sample in ‘Rockin With Me’. Hailing from Denver, $tevie showcases a strong UK Drill influence via the pulsating 808 drums. With the globe’s current fixation on Drill music, ‘Rockin With Me’ offers a new take on the genre straying away from street related themes to a more intimate subject matter.

Recently released from incarceration, West London emcee Raid Official drops his ‘Official Freestyle’. Fresh off his debut mixtape Her Majesty’s Institute, Raid raps about his bittersweet life over a soulful vocal sample and the Caribbean-influenced instrumental. Like the rest of his mixtape, Raid Official paints a vivid and incredible image of his upbringing and six years in prison.

ERIK FRANK – LET GO OF YOU

Erik Frank reveals incredible R&B stardom potential in his recent release, ‘Let Go Of You’. Now based in the States, Frank’s new hit includes clever arrangements, immaculate production and raw talent showcased through R&B and pop sonics. Aside from his cover of Justin Bieber’s ‘Peaches’, Erik Frank’s infectiously catchy new track ‘Let Go Of You’ gives the first taste to the musician’s chart-topping potential in 2021.

The UglyFace collective’s ‘By The Pound’ is a sonic journey through hazy California afternoons. From buttery vocals to the strumming bassline and slow electric guitar, the summery track will receive no complaints in your next 4/20 song queue. ‘By The Pound’ is the fourth release from UglyFace this year, with the group comprised of Kevin Farpella, Aaron Temple, Aric Jones and Andre Mosley.

Nimkish’s confident new track ‘YSB’ featuring ASCXNSION has no trouble healing any heartbreak. The Vancouver-based artist’s latest R&B-pop creation is a liberating blend of beautifully layered vocals, soft piano chords, and fleeting synths. The anthemic new single demands all ears as Nimkish heals old wounds and regains her freedom through forgiveness. ‘YSB’ is Nimkish’s first official release since 2019 and sheesh, it was worth the wait.