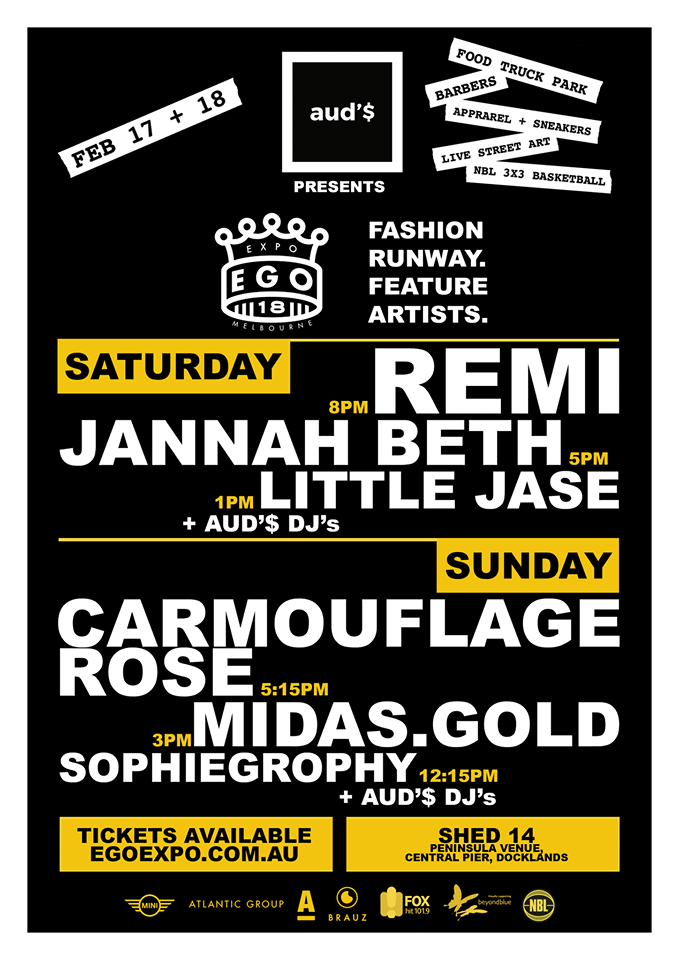 Melbourne is set to receive a serious taste of the streets this February as Australia’s largest independent streetwear expo opens its doors; and you can catch some of the country’s hottest acts live on the runway thanks to AUD’$.

Ego Expo will kick off at 10am Saturday Feb 17 at the famous Shed 14 Docklands presenting; “an exclusive shopping-spree weekend combined with live street art, street food, skateboard action, breakdancers and music performances…” and we are v/ excited to announce your AUD’$ certified ca$h that will be bringing the vibes over two days:

As well as performing their own sold-out headline tours and world-class festivals, REMI have also shared the stage with Danny Brown, Vic Mensa, De La Soul, Joey Bada$$ and in December last year were invited to perform Gorillaz tracks with Damon Albarn on each of his Australian Tour shows. REMI’s appeal is as diverse as it is impressive.
With an endless list of wins such as AIR‘s ‘Independent Hop Hop Album of the Year’, AIR‘s $50,000 Carlton Dry Global Music Grant, Coopers Australian Music Prize, The Age/Music Victoria Emerging Artist of the Year, AU Review‘s ‘Hip Hop Live Act of the Year’, Rolling Stone Best Independent Release for ‘Raw X Infinity‘ + many more, REMI is a well known and critically acclaimed act NOT to miss.

Having dropped her first music video on Nov 4 2016, there is no doubt of the substantial work Jannah Beth puts in to not only cement herself as a diverse and innovative artist, but also to collaborate and spread love. The Sydney artist has since become the touring vocalist for Sydney producer Ribongia, appeared on many lineups such as festive fundraiser Sleigh Queen @ the Botany View Hotel, all while working behind the scenes on her first body of work and a mix of collaborations with some exciting artists.

Check out their Ribongia – ‘Before The Winter‘ via Youtube below

Who else do you know that can throw a diss so fire they get props for it from the person they were dissing? Little Jase is an independent Filipino X Scottish rapper that is Australia born and raised in St Kilda. His humble 6k+ Facebook likes don’t prepare you for the reach of the videos uploaded organically that Little Jase achieves. International walls ain’t no thing with internet land and hard work, yung Jase is a prime example of that. From link-ups with Statik Selektah, to an eventful two month long trip to the states that ensued a cameo on Mic Sessions @ UGHHBLOG performing “Give Up The Goods“, and WINNING Rap Contest @ The Airliner LA. Rolling back to the hometown Melbourne in Nov last year after the state-side madness meant playing and slaying Laundry Bar’s Summerjam: “All You Can Spit” alongside Cylo, Yaw Faso, Mac Eleven, Trix William, Francois, Brandon Stone + many more, the credentials keep coming 💸

“It’s your life better paint your canvas, this life’s what you make it I’ll take my chances” – LITTLE JASE

Check Little Jase’s homage to Prodigy of Mobb Deep, sitting pretty on upwards of 132K via Facebook below:

The Spotify cover-boy whom Purple Sneakers dubbed “an absolute force to be reckoned with”. Brisbane’s Carmouflage Rose who only took a hold of his talents over the past few years, has in that short time, curated an incredibly upfuckable-with resume. Rose can boast sharing a stage with A$AP Ferg, Manu Crooks, Haiku Hands, Young Franco and many more @ ‘Wonderland Scarehouse Project, soon to be added to the list is the grime godfather himself Wiley (at upcoming ‘Godfather II‘ Tour), and lord of the underground, Fat Nick (🤞 that tour comes to fruition, R.I.P PEEP).

From being the Most Played song on triple j, the No.1 song on Viral Hits Australia & NZ (Spotify), earning spins on the infamous rage rotation, to ensuing a debut national  tour… check out “Late Nights“ via Facebook below

Following the success of “Location” and a massive run of shows down the East Coast supporting Ivan Ooze, through QLD with Triple J Feature Artist ECCA VANDAL, and a key slot at Sprung Hip-Hop Festival,  a very hard hustling Midas.Gold of R.E.A.L Collaboration & recently 123 Agency (Tash Sultana, Kingswood and Killing Heidi) continues his streak with another well calculated move by releasing “Poppin” to critical acclaim & announcing more AUS tour. Set to take Melbourne and Sydney in Feb with some dangerously expen$ive supports (Lil Spacely, SOMA MUSIC, Netti, Devarn & Juñor (DJ set)), get those tickets quick and remember to listen out for “Location” when the hottest 100 comes around 🔥

Recently on the epic FOMO lineup & named Triple J Unearthed Feature Artist, Nigeria-born and raised in New Zealand, Sophie Olowookere, better known as Sophiegrophy is an Australian rapper, singer, & songwriter extraordinaire. With countless releases of her Facebook freestyle videos such as GOLD, 6 TIME$, receiving many positive feedbacks, Sophiegrophy was went on to drop “PURPULARITY” in December 12th, 2016. ❗With little experience with the producing aspect of music, Sophie was able to record, mix & master 10 tracks & complete her mixtape independently on her own for the duration of 4 weeks❗

PURPULARITY truly illustrated Sophiegrophy as an artist as the mixtape and the public liked- earning her a feature in I-D Magazine, performing in many shows such as club house (Lowton) in Sydney, BIGSWELL (wvs), Juice (ISSA RAP FEST), Evangeline’s “Atelophobia” Ep Launch etc & collaborations with Walker & Royce, Milwaukee banks & many more.

Check out her debut single FA$T LIFE via Youtube below.

And of course: AUD’$ DJ’s Junor and Sonic Vibes will be behind the decks, spinning that cash consistently thruoghout the Fashion Runway’s💰

Now, a lil’ insight from EGO EXPO founder Mel Yu via Ballin’ On A Budget on what you can expect, and the values of the movement.

“Ego Expo aims to bring an inspiring movement and positive change to our community as it recognises the founders/designers behind these brands are big dreamers, risk takers and leaders of the pack. It caters to those who like to look good while knowing it is their deeper layers and personal life story that makes them unique. This is your chance to get to know the founders behind your favourite brands and meet new labels that may have been hiding right under your nose!”

“Street culture encompasses so many sub-cultures. Visitors are going to be blown away by the elements of hip-hop fashion and music, Japanese street influenced designs, and also skate, tattoo and basketball inspired threads. The Ego Expo is the grassroots of Australian Street Culture and the beginning of a large community that has not yet had the exposure or recognition it truly deserves. Expect to shop affordable, comfortable and one-off exclusive designs in tee-shirts, track pants and accessories like watches, snapbacks, and sneakers. We have three Fashion Runways a day that will entertain our guests in music, dance and new collections from our Australian designers. The most innovative part of this expo is that it is the world’s first, “see now, buy now” runway. For the first time in history, guests can download our Partnered Event App and buy what they see on the runway instantly AND take it home with them ON THE DAY.”

“This goes deeper than a “streetwear expo”, it represents our own personal stories. It inspires and encourages others to reach for their dream and not be limited by social pressures or fears.”

“As a launch show and the first of its kind, my goal is to open the doors for the community to come and experience something in lifestyle, music, fashion, sport, art, and food. My goal is to demonstrate that sub-cultures can work harmoniously when we look at the sameness of our values rather than separating us on differences.”

100% of booking fees from all tickets sold will go towards beyondblue, to assist with raising awareness for anxiety, depression, and suicide.

Check out the EGO EXPO launch video below