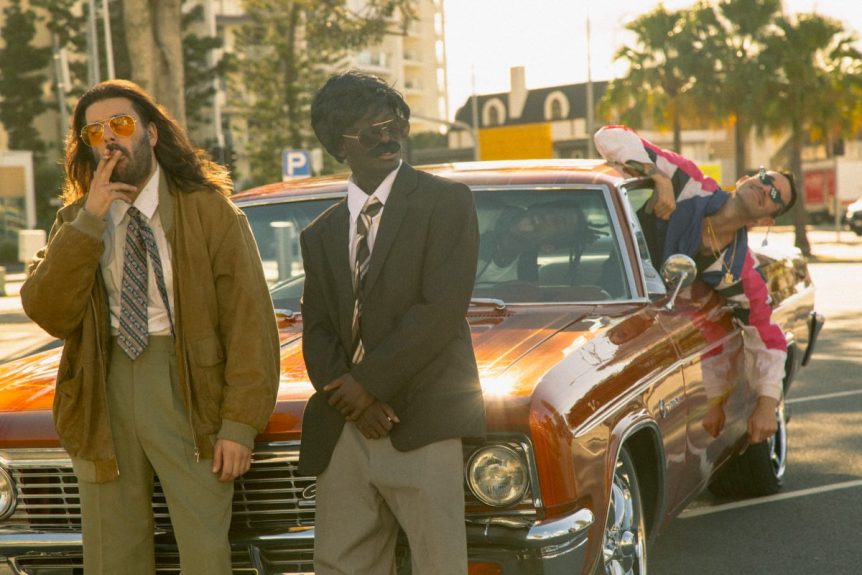 Issa Monday. It’s the 101st Ca$h Of The Day & Paces has just dropped a hugely entertaining official video for his new single, ‘Call The 5-0’, featuring an all-star squad of Midas.Gold and Tigerilla, as well as Paces himself, all flexing their best acting chops.

A lampoon of classic ‘70s detective cliques underpinned by classic cars, suspenders and sirens, the video features Paces, Midas.Gold and Tigerilla as the retro cops and modern classic suspect. Directed by Ainsley Hutchence of Melbourne-based Sticks & Stones Agency and produced by Brisbane-based Jáen Collective (Manu Crook$, B Wise, Jesswar), the team narrows in on cinematography and editing which would make a young board-sliding Spike Jonze proud.

On the making of the video, Paces said, “This film clip was crazy fun to make! Midas.Gold, Tigerilla, this amazing dancer named AB Sow and I were all dressed ridiculously running around Surfers Paradise playing cops and robbers (plus a sneaky cameo from Doolie). There were a few sketchy moments like when this lady came out of her unit and yelled at me for waking her up, but we got the shot!”

Midas.Gold adds, “It was an auspicious day indeed – the day the fire was lit eternal, when stars aligned a vision was born, it was this…”

On collaborating with Paces and Midas.Gold for the track, Tigerilla says “These two artists I knew very well but was yet to collaborate with. What an exciting time for the Australian music industry!”

‘Call The 5-0’ is the most recent taste of Paces’ upcoming sophomore album, ZAG, to be released on August 24th this year. Paces continues to acknowledge and support emerging Australian artists looking to make a leap into a career in music and as a result, Paces’ sophomore album ZAG features breakout performances from the likes of Midas.Gold, CLYPSO, Jeida Woods and Doolie, looking to emulate the success of artists like Kučka and Jess Kent, both of whom Paces collaborated with previously.