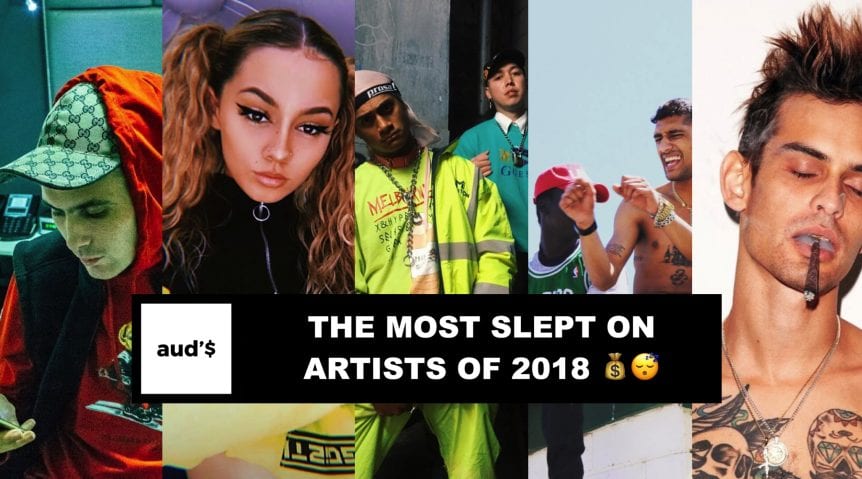 2018 was big for the culture. It demanded a space. Beats 1 Radio, MTV and the ARIA‘s finally took notice. Artists like Kwame, Carmouflage Rose and Miss Blanks broke down doors. LAROI and Chillin.It started getting the attention they deserved. Shadow got a record deal. Triple One, Manu Crook$, Anfa Rose and Sampa The Great became household names. The next generation has officially arrived. It’s dope to see the industry catching on to the streets. For the internet generation to start taking the reigns. But which names have they missed? Who got slept on and who’s next up? There’s so much ca$h out there that we’re posting daily on our channels. However, we’ve compiled a list below of some of the Australian urban artists who’ve put in the work throughout 2018 and who will be the ones on everyone’s lips next year and beyond.

By the time you hear of Sydney’s Phillabu$trr in the mainstream it’ll be too late. He’ll be on billboards, in the charts and probably doing movies or some other cool shit. The U. S has picked up on how talented this dude is long before his own backyard and so he’s been in the studio abroad with both Waka Flocka and Yung Bans in 2018. Whether it’s technical spitting over trap beats (suss his gram for regular snippets) or melodic power r&b vibes, he’s got a full arsenal, working closely locally with Imbi The Girl collaborator DeliPres.

If the industry truly reflected the streets then Huskii‘s name would be in every blog and on every festival. The Wollongong representative has forever been a great rapper but now he’s built a cult 201 following to prove it – has there been a more quotable bar than “racking clothes from David Jones” in the last 18 months? His Body The Booth Freestyle on Body Bag Media has clocked over 1.5 million views and his regular drops are seen in the trending lists on Soundcloud. He’s starting to release onto streaming platforms and will only continue to rack up numbers in 2019 and beyond.

Another case of the rest of the world catching on to our local talent before Australia, these two guys regularly chart in the Top 10 of Rolling Loud streaming affiliate Audiomack, collaborate with TGUT and rock fire local street threads. The GREMLNS have been Melbourne’s hottest rap group for a minute and these two are taking it global fast. Both killed their respective AUD’$ Vault Cyphers and have built strong catalogues on Soundcloud. They’re teasing a January drop for the video of their recent collab DEX UP and have caught the eye of VICE.

Only 19 years old, this Brisbane songstress has a massive future ahead. After impressing us with Midnight back in March, and then dropping WAYS in October, she’s proving one to watch with her late night R&B vibes. A recent collab with Vic August on ‘Woozy’ and a link-up with Warner Music Australia has up anticipating a project and mainstream recognition in 2019.

‘Bandit’ was one of the best cuts of 2018, and while Vic August got a lot of deserved shine – Figuero Jones has gone on to prove he’s got what it takes on his own. While we’ve long championed of the entire 6K collective from Perth, The WVS signee has racked up impressive numbers on Spotify and his latest single GETONUP! is set to be a falsetto drenched summer anthem.

Poppy started turn heads back in 2017, killing our International Women’s Day Cypher and releasing Ocean which scored national radio slots. This past year she dropped another solid single Lost and added Rose to her name but it’s what she did behind the scenes – including linking up on a management roster with Alice Ivy and scoring her first festival slot – that has us ready for major moves ahead.

Pronounced Double 6 Records. This crew is like Chief Keef and GBE in 2011. Getting serious shine online and from their respective cities, but the wider scene yet to wake up. They’re cultivating a fanbase by telling their stories from Melbourne’s South-East streets and once it catches on it will explode. Already their infamous events are the most talked about across the scene, while online Free Da Guyz has over 100k Youtube views – but its latest drop Block Hotter by Jaye & Ecosystem that might be the most impressive release yet.

The highly entertaining NSW duo have been making waves on the net with some of the best visuals since 2016. You’ve seen them freestyling in the AUD’$ studio alongside IVAN OOZE, Midas.Gold & Z.Lewis and they’ve long had it Planned Out. This year they released a collab with Atlanta’s Reece La Flare and signed for bookings with Poster Child before sneakily dropping one of our favourite songs of 2018 Miss U right at the last minute.

Sober was hands down one of the best songs anywhere in the world in 2017, and still – despite dropping a spring EP which has already racked up millis online – the Gold Coast based duo somehow flew under the radar again this year. With a smooth 90s laced R&B catalogue essential for any date night playlist, they’ve scored some love in the U.S & Canada from Beats 1 Radio and their takeover is simply a matter of when not if.

Despite racking up well over six figures online, Fire Extinguisher was the hottest rap track of 2018 not to make an end of year list.  NSW based JamarzOnMarz represents the changing nature of Australian Hip-Hop –  queer, PoC and sonically diverse, he’s equally as comfortable on the mic or as a saxophone player / producer. His broad, infectious talent is bound to catch wider attention into 2019.

A potential Noname in our own culture; the lyricist, poet and rapper has the right elements to catapult her career next year. The South-African born songstress croons effortlessly in recent single Bunsen Burner which was released via legendary NYC hip-hop & electronic label Tommy Boy Entertainment, the once home of De La Soul & Naughty by Nature.

If peer recognition were the ultimate measure of success, Cragie Wave would be top of the tree right now. He raps somewhere between Jaden Smith, Denzel Curry & Earth Gang and had the most slept on verse of the entire AUD’$ Vault Cyphers (catch the ‘Evolution of Man’ narrative!). His live shows have long been renowned in Melbourne and in typical low-key Wave style he dropped two killer singles in December with zero promo. One day they’ll wake up. Wave.

The 21 year old started to appear more prominently in the second half of the year as Weeknd inspried R&B cut Understand It made its way to airwaves and playlists. Based out of Cairns but currently on his first international tour through Europe and the UK supporting Chase Atlantic, 2019 promises to be a breakout year.