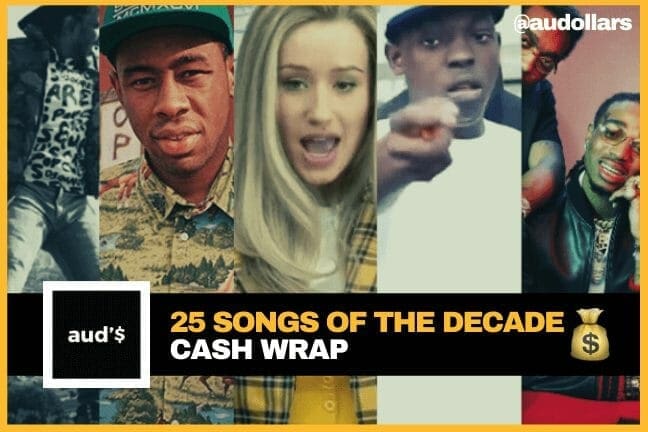 It’s been a wild ride. But we’ve got there. The 2010s are done and a new decade awaits. A decade in which hip-hop is without doubt not only the leading music genre in the world, but the leading influencer of culture across continents. Every aspect of life is infiltrated with hip-hop. Be it our regular every day lingo. Daily fashion trends. The leading story on social media. Or the political agenda of governments around the globe. Hip-hop now runs the world.

But how did we get here?

As you get ready to bring in the new year, why not revisit some of the biggest hip-hop moments of the decade? We’ve put together a list of 25 hip-hop songs that defined the decade. This list isn’t exhaustive. We tried not to repeat artists. It isn’t objective. We picked what we liked. But it bangs. It’s just some dope songs that got us to where we are today. So have a read. Chuck on the playlist. Enjoy the vibes. And then comment on our socials who we disrespected and who you would’ve put on the list instead!

Love The Way You Lie feat. Rihanna by Eminem
Easy to forget how massive this joint was at the start of the decade. Two Goliaths of pop / urban culture linking up. Press play, watch everyone sing along and then remember this giant.

Same Love feat. Mary Lambert – Macklemore & Ryan Lewis
No matter your opinion on Macklemore, he had an undeniable impact this decade. While he had bigger songs, this one was a powerful commentary, ahead of its time, which left a legacy.

Old Town Road by Lil Nas X
Is it Rap? Is it country? Either way it’s now in the history books. Yee Haw.

Magnolia by Playboi Carti
Iconic. The beginning of a wave that others are now riding. Everyone still hittin the milly rock thanks to Carti.

Watch Me (Whip / Nae Nae) by Silentò
Easy to forget the reach of this record. Especially if you weren’t a teen when it dropped. Was mega-viral and a predecessor to other trends later in the decade. Still slaps too.

GUMMMO by 6ix9ine
Not much else needs to be said. Read the court reports yourself. Never seen so much testosterone on dancefloors.

Look At Me! by XXXTENTACION
A polarising figure whose impact will be felt long after his short but exciting career. This changed the game.

rockstar feat. 21 Savage by Post Malone
Two noteworthy artists who had bigger moments individually, but this collaboration was a chart-topping mega hit everywhere.

Mo Bamba by Sheck Wes
Did you know the opening three notes form a tri-tone which is common in classical music to build tension?

25. Black Beatles feat. Gucci Mane by Rae Sremmurd
Gucci Mane and Mike Will Made It soundtracked a significant portion of the decade, however this collab with Swae Lee & Slim Jxmmi was another level. The rock inspired track became the anthem that made everyone stand like statues for a few months. It was a weird time.

24. FDT by YG & Nipsey Hussle
The enemy of my enemy is my friend and so YG and the late Nipsey Hussle brought their respective colours together to send a message from minorities to the, at that stage, candidate for President. A lot’s gone on since then and so this song just gets better with age,

23. Lucid Dreams by Juice WRLD
Late 2017 and the whole world was talking about this incredibly talented kid from Chicago who could freestyle for hours. Juice broke out with this hauntingly beautiful moment which will stay with us forever. A unique talent taken far too soon.

22. Fancy feat. Charlie XCX by Iggy Azalea
First thing’s first; Iggy Azalea was the biggest selling rapper in the world in 2014. Regardless of your tastes, I-G-G-Y ran things for a minute and this one can still fill a dance floor years later.

21. Sicko Mode by Travis Scott
For some reason, the most quotable line from this record is said by a guy who didn’t even score a credit for the feature. The beast that is Travis Scott keeps growing in stature and ASTROWORLD was a landmark on the journey.

20. Panda by Desiigner
Born on the streets, became a hit on Soundcloud, spawned memes and viral dances (dab!), topped the charts, ended up on a Kanye album. Panda personified the 2010s.

19. XO Tour Llif3 by Lil Uzi Vert
This demo was uploaded by Uzi without label permission. After he lost his phone stage diving. It perfectly captured the emo-ish angst of a generation who found their home on Soundcloud. It now has well over a billion streams and views online.

18. Bodak Yellow by Cardi B
Aside from one notable name earlier, nobody this decade has flipped a reality tv spot into a mega-career better than Cardi B. Got a bag, fixed her teeth. Cuffed her man. Became a Queen.

17. This Is America by Childish Gambino
There’s moments when art is about more than entertainment. When it holds a mirror up to society and forces us to look at itself through an honest lens. Ably assisted by a stellar support cast, Donald Glover did this powerfully in a piece which will be replayed for generations.

16. Mask Off by Future
It’s hard to pick a top track from a guy who had multiple #1 albums over recent years but Mask Off was clearly a standout. The flutes spawned their own production wave while lyricism about heavy Optiate use is Future’s forte which others continue to emulate.

15. Look At Me Now feat. Lil Wayne & Busta Rhymes by Chris Brown
Even though you can’t rap every word of this mammoth song, you’ve probably tried. And next time you hear it, you’ll probably try again. It’s a banger in every sense of the word. Don’t hate from outside the club.

14. Bitch Better Have My Money by Rihanna
Rihanna cast a shadow everywhere she moved this decade, such is the influence she carries in every area of her work. BBHMM was a statement that she is not to be played with. Mastering trap flows and a bold presence as effortlessly as she did introspective R&B while delivering cinematic level mob visuals. Slay.

13. Pick Up The Phone feat. Quavo by Travis Scott & Young Thug
Three artists who not only help mould the sound and aesthetic of the latter decade, but likely well into the next. While they all had many more successful projects and moments solo, this was the new guard coming together, taking centre stage and owning the spotlight. That BET performance will forever be iconic.

12. The Motto feat. Lil Wayne by Drake
This shit was so big that YOLO was the second most popular word of the year in 2012. Behind only #hashtag. Kids dancing to KIKI probably weren’t even born when Drake was first making phrases and trends global.

11. Shutdown by Skepta
The UK wave currently taking over the planet owes its roots much earlier in the decade. Figures like Dizzie Rascal, Tinnie Tempah and Roll Deep were making serious moves, however Skep’s breakout in 2015 solidified UK rap as a global force. Truss mi daddy.

10. Versace by Migos
While Bad and Boujee sat atop the charts for months, Versace was the moment the Atlanta triplet trap flow began it’s ascent as the dominant element of rap music in the 2010s. Drake’s co-sign of the three Migos took them to a new audience and birthed their stardom.

9. 212 feat. Lazy Jay by Azealia Banks
The fact that Azealia Banks has managed to do a whole bunch of crazy shit since and piss off pretty much everyone in the world; yet those same people still go wild when you spin this joint, is a testament to just hard this record hits.

8. F**kin Problems feat. Drake, 2Chainz & Kendrick Lamar by A$AP Rocky
Who had the best verse? Rocky’s steeze. Drake’s punches. Kendrick’s flows. And that slapping 2Chainz hook. The only problem with trying to talk about this song is there’s too many killer moments to choose from.

7. Hot N*gga by Bobby Schmurda
The footage of a teenage Bobby Schmurda doing the Schmoney Dance on the boardroom table at Epic Records after signing a deal is all-time. 6 years later and his momentum feels like it’s still growing. Only 346 days till December 11 2020.

6. Monster feat. JAY-Z, Rick Ross, Nicki Minaj, Bon Iver by Kanye West
There’s a moment, in the middle of My Beautiful Dark Twisted Fantasy, the album of the decade and Kanye West’s pièce de résistance. A moment where amongst legends like Ye, JAY-Z and Rick Ross are deep in their bag, and a fast-talking, pink-haired New Yorker steals. The. Show. Widely acclaimed as the verse of the decade, this was Nicki’s arrival and she would go on to sell over 72 million albums.

A hook became a war-cry, which became an anthem. Which will forever remain in the history books. A Pulitzer Prize winner, Kendrick Lamar was so much more than just a rapper from Compton this decade. From the cover art on the White House lawn, to the all-star assembled cast for a musical masterpiece; To Pimp A Butterfly will long remain an art piece which captured a time of unease and of racial tension, but of hope. It’s hard not to get chills watching images of crowds marching under the banner of #BlackLivesMatter chanting “We gonn be alright!” This is the essence of hip-hop.

12. The number of times in a row JAY-Z and Kanye played this song at their Paris show in 2012. The second you hear those iconic Hit-Boy video game synths, the next thing you hear is screams. Wherever you are. Listed by lots of press as the beat of the decade, this was two kings unashamedly flexing on their throne. Bold. In your face. Going Gorillas. What does that even mean???

3. Yonkers by Tyler, The Creator

Last night I got to see a 6ft African American dude from LA in a blonde wig play the piano and sing to tens of thousand of people for an hour. Tyler, The Creator is on his way to legend status, if he hasn’t already arrived. A run of acclaimed albums, a lasting footprint on the world of fashion, and the hearts, minds and loyalty of a generation. Through unadulterated authenticity. Last night though, for a moment, he threw back to the raw raps of a shadowy teen on a stool with a cockroach. And the crowd rapped every word. That kid’s grown up. So has his audience. But Yonkers will long remain the origin story of a cultural icon.

Rap would not be what it is today without Chief Keef. The young stars you see emerging today across the planet under the banner of drill owe their craft to the work of Sosa, Young Chop, DGainz and Glory Boyz Entertainment. Those dark videos of big London or Sydney crews rapping directly into the camera you’re seeing all over Youtube in 2019? Born circa 2011, South-side Chicago. These guys mastered the internet soon after Soulja Boy had laid the blueprint and they ran with it. I Don’t Like launched Keef skywards as an artist but it was Lova Sosa that solidified GBE and drill more widley as a force of influence. In short. If I catch another motherfucker talking sweet about Chief Keef I’m fucking beating they ass!

1. Numbers On The Boards by Pusha T

When it comes to the art of rap. Nobody did it better than Pusha T this decade. And Numbers On The Boards embodies that. Cold, calculated bars over a chilling Kanye West beat sample. There’s no bells and whistles, no memes, no games. Just endless multis, metaphors and punchlines. These two would combine for bigger headlines later in the decade for various reasons, but musically here they were untouchable. Spin this record and any hip-hop head in the vicinity gonn give you that mean mug. Yechk!