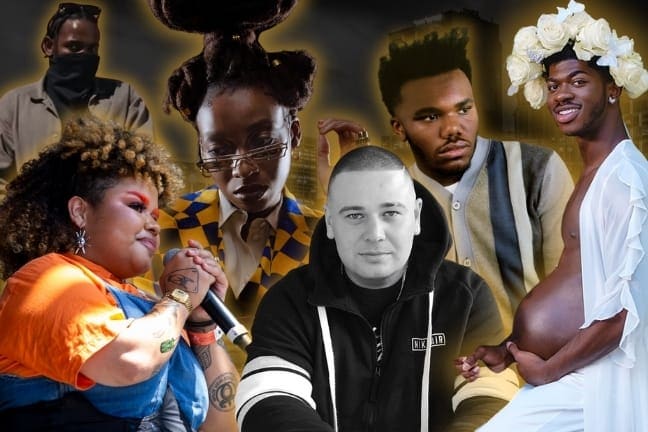 Welcome to our new feature where we wrap up 10 of the best moments over the last month in the AUD’$ and wider hip-hop universe. There’s never a list without controversy, so let the comments begin…

Since his record-breaking viral debut ‘Old Town Road’, Lil Nas X has made a habit out of taking over the internet and he’s done it yet again. To announce his debut studio album Montero, Lil Nas X posted a pregnancy shoot to Twitter and Instagram with the caption: “SURPRISE! I can’t believe I’m finally announcing this. My little bundle of joy ‘MONTERO’ is due September 17, 2021.” While still a new name to the scene, it feels like every release from Lil Nas X is backed by an equally thought-out marketing plan. The 15-track pop-rap album arrived on time with features from Jack Harlow, Megan Thee Stallion, Doja Cat, Miley Cyrus and Elton John.

Mac Miller’s magnum opus 2014 mixtape Faces is making its long-awaited arrival to streaming services and vinyl on October 15. Following his sophomore album, Watching Movies with the Sound Off, the artist’s experimental eleventh mixtape has become a fan-favourite for Mac’s introspective lyrics on struggling with addiction across jazzy and psychedelic instrumentals. The estate of Mac Miller also shared computer-animated visuals for ‘Colours and Shapes’, one of the many collaborations with Thundercat from the project. The music video is directed by Sam Mason creates a surreal world that follows Mac’s dog Ralph navigating through pieces of the late artist’s childhood.

AUD’$ are excited to bring you the soundtrack every morning with the return of our Cash of the Day series. Whether it’s the hottest new releases from Australia and across the globe or just what track is matching the mood that day, we’ll be dropping daily gems of anything from Hip-hop, R&B, Afrobeats, and more. Last week, Mulalo got us through the mid-week slump with her booming new cut ‘M31’ while Melbourne artists Brandon Stone and VV-Ace kicked us off this week with some Monday motivation in ‘Up The Ante’. Follow AUD’$ on Instagram and Tik Tok to catch the Cash of the Day from Australia’s Hip-hop Connect. Certified cash only.

7. LITTLE SIMZ DROPS AN ALBUM OF THE YEAR CONTENDER

UK Hip-Hop’s first lady Little Simz has released her fourth studio album, titled Sometimes I Might Be An Introvert to critical acclaim. At 27 years old, the Mercury prize nominee delivers with maturity, reflecting on the constant battle she endures between her public and private lives. Clocking in at just over an hour, the album raced to the top of the UK album charts and locally reached the top 40. Already fan favourite down under, SIMBAI has the potential to elevate Simz to global superstardom, with parallels already being drawn between her and her idol Ms Lauryn Hill.

It’s been over two years since we’ve heard from Melbourne neo-soul / R&B artist Kaiit on the release front, and now, unfortunately, we know why. The ARIA award winner delivered a public cry for help this month, launching a GoFundMe campaign which she states is needed for her career to continue. Taking to her Instagram, the PNG-born talent stated, “I need to raise these funds in order to be able to recover my independence as an artist, so I can start releasing music again and share my art with you all.” Kaiit debuted in 2017 with ‘Natural Woman’ which led to her Live From Her Room EP the following year. A global talent at a very young age, while we aren’t across any contractual elements that have plagued Kaiit, any situation which robs us off her art is a travesty. At the time of writing, her campaign has raised over $60,000 of the $120,000 goal. You can contribute to Kaiit’s GoFundMe page here.

5. THE RETURN OF KENDRICK LAMAR (VIA BABY KEEM’S NEW ALBUM)

It’s now nearing five years since a full-length project from hip-hop’s most awaited Kendrick Lamar and recently we’ve been blessed by a host of new music and announcements from the Compton emcee. Coming via his little cousin Baby Keem and the new album ‘The Melodic Blue’ (which deserves to be in Grammy nom discussions), King Kenny has again become the focal point of rap quotables, foreshadowing a future album which is set to be his last on TDE before he joins Keem full-time at his own creation pg Lang. Let’s get this shiiiit.

One of the most innovative platforms to emerge during the pandemic, Verzuz has become a cultural phenomenon across hip-hop, R&B and soul, giving us legendary moments on IG Live from the likes of RZA, DJ Premier, DMX, Snoop Dogg, Brandy, Monica, and more. After Jadakiss and The Lox stole the show in August, the spotlight was again turned on New York as Fat Joe and Ja Rule delivered another classic. Rumours are circulating about future battles including 50 Cent, T.I., Nicki Minaj, and Lil Kim.

3. COMPLETE PUTS ON FOR PERTH IN RAPPERTAG #06

While it may have just snuck in at the end of August, Rappertag #06 from Complete felt too important of a moment to miss an inclusion on this list. After being tagged in by Wombat, the OG from WA commanded attention with his relentless verse, showcasing an impressive pen game of multis and metaphors commentating on the state of the domestic hip-hop scene. Not satisfied with his message alone, Complete preceded to shift the focus to bigging up near on the entire Perth hip-hop scene one by one. A legacy moment for the 6k.

2. THE KID LAROI IS MAKING HIS LONG-AWAITED RETURN TO AUSTRALIA

The Kid LAROI will return home with the longest-running #1 single of the year for his global End of the World debut tour. The last time the Sydney/Kamilaroi artist performed in Australia he opened for his late mentor Juice WRLD in 2019. The 18-year-old has since become the youngest artist to reach #1 on the Billboard 200 since Billie Eilish in 2019 and the first solo Australian since SIA’s 1000 Forms of Fear album in 2014. LAROI will make his highly-anticipated return to Australia and New Zealand in May/June of 2022 and there’s no doubt it’s going to be a historic victory lap for the Redfern star.

1. KANYE AND DRAKE GO HEAD TO HEAD WITH 2021’S MOST ANTICIPATED ALBUMS

There are no two hip-hop celebrities more polarising and headline-grabbing than Kanye Omari West and Aubrey Drake Graham. After what seems like half a decade of continuing shots both on record and across social media, it’s no coincidence both artists release their respective DONDA and Certified Lover Boy within a week of each other. Dominating every algorithm and trend, the albums were two of the most talked-about and best selling of the year but after the extensive rollouts, have both received mixed critical responses as to where they sit in the Kanye and Drake catalogs. Which album do you prefer?